There has been a trend in Hollywood regarding rich celebrities wanting to show they care about the planet, and thus drive around in hybrid vehicles.

The most popular car of them all is the Toyota Prius. I drove the Prius and found it to be absolutely brilliant. It is a practical, everyday vehicle that saves you tons of money on gas.

However, the car is a bit out of place in Hollywood; it just isn't glamorous enough or luxurious enough to fit the lifestyles of mega-stars like Leonardo DiCaprio and Cameron Diaz. 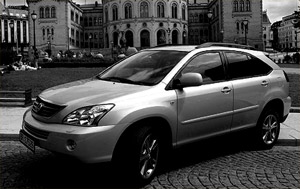 However, there is an answer, from Toyota's premium brand, Lexus.

The vehicle is the RX400h, the first premium-luxury hybrid vehicle to hit the market, and guess what? It is an SUV.

So, is it an actual hybrid with actual hybrid economy, or is it blowing “environmentally friendly” smoke at your eyes and blurring your vision?

To find out, I borrowed one for a week to see how it is.

That is a lot of power, and thus this fairly large SUV sprints from zero-100 km/h in 7.5 seconds. That is quick, but it could have been quicker if it weighed less. Sitting by a curb, it weighs 1981kg, and that is a lot.


And yes, thanks to the weight savings the Highlander Hybrid is much better when it comes to fuel economy.

When I spent my week with the Highlander Hybrid, I averaged about 8.5 litres/100 km. The RX400h, according to its onboard computer, told me I was averaging 9.6 litres/100km. According to my calculations however, the figure was about 11 litres/100km. That is still not bad for a luxury SUV, but I was expecting it to do better.

So, the culprit damaging its fuel economy is the weight. That said, this vehicle couldn't really be any lighter. After all, it does come with every luxury feature you can think of.

My test vehicle came with the usual Lexus comforts, like power leather seats and power everything else. However my vehicle was a bit too well-equipped. I had the Premium Luxury Package, which means I had the navigation system, the reversing camera (very cool feature, just wish I could have it on all the time), and a rear seat DVD entertainment system with wireless headphones.

Whereas those features are understandable, and is what buyers of such luxury vehicles are demanding these days. But a power operated tailgate I can't quite understand. The self-opening and closing tailgate motor is big and heavy, and should not be included in a vehicle that should be optimizing fuel efficiency by saving every gram of weight it can. This is just one feature I would like to delete from this vehicle.

Another feature that needs some work is the CVT (Continuously Variable Transmission). I have never been a fan of CVT in any vehicle, and this is no exception. What makes this system particularly unsuitable is the amount of noise this vehicle makes when you press on to move faster. It sounds weird and unrefined, which doesn't quite fit the rest of the character this Lexus provides. Yes, the Highlander Hybrid with the same engine and transmission should have the same issues, but for some reason I didn't mind it in that at all; it felt appropriate. When you step into a Lexus though, you expect more refinement.

I expected more from the navigation system too. For some reason, every time I'd enter a street name, it would show me a list of streets in the States with the same name. Even when I would enter the city in the nav system, most of the time it didn't know that the street existed, but by manual scrolling, I would find it without any problem. And no, I wasn't spelling the street name wrong either. This issue was shocking, because tthe last time I had a Toyota product with a navigation system was the Prius, and I had no issues with that. This RX400h has the same system, so I don't know what went wrong. I just hope this was a one-off issue with my test vehicle; otherwise this system won't bode well with owners.

Despite my few issues with it, I liked the RX400h. The interior is spacious and comfortable, the stereo is fantastic, the headlights that turn with steering input is a great feature, the rain-sensing wipers work like a charm, and it even looks good parked in my driveway.

At a base price of $62,200 and an as tested price of $69,900, it's priced well too, and would certainly give you better fuel economy than a similarly priced Infiniti FX35 or Mercedes-Benz ML350.

However, if you want my advice, I'd say, if you need a big SUV for the family and you want all the plus points of owning a hybrid, save yourself some money and buy the Highlander Hybrid instead, it makes more sense.

However, if you are rich or famous (or both), then absolutely nothing else should do. Hollywood stars, your new vehicle has arrived.