Vendetta a mirror into media-saturated society


Remember, remember the fifth of November! V is a prison cell labeled Roman numeral number five. In a dystopian future civilization where experiments are conducted on live humans, cell V holds a prisoner. A prisoner who manages to escape and, in spite of the horrific burns covering his entire body and face, sets up a resistance to the fascist-like government in Britain. As America fights a brutal civil war and the media hysterically reports on encroaching epidemics (sound familiar?), V (Hugo Weaving) becomes a knife-wielding Zorro in a Guy Fawkes mask (picture a joker mask with less make-up), looking for allies. 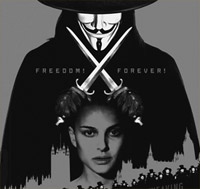 He finds an ally when he encounters Evey (Natalie Portman), a mild-mannered office girl being assaulted by policemen when she is out past curfew. Spouting Shakespeare and throwing knives, V saves her from rape.

“I wish I wasn't afraid all the time,” says Evey, the daughter of two dead activists who were tortured and eliminated by her government. But it becomes apparent that this woman has inherited their desire for change. In V's underground lair, where she is hiding as a fugitive after being seen with him, Evey learns about music, illegal classical art, and surviving torture. Portman pulls off a performance that is strikingly natural, considering she is speaking to a Guy Fawkes mask. All that screen time in the Star Wars franchise has made her a skilled sci-fi actor. Her focus and her control are amazing and she has the gift of making one forget her beauty, seeing only the character. Much was made in the media about her shaving her head bald for the role, a makeover she claims she's always wanted to perform.

Adapted from the graphic novel of the early '80s, this film comes from the many members of the “The Matrix” team. Director McTeigue was first assistant director on the Matrix trilogy and the V for Vendetta screenplay was written by the Wachowski brothers, who also penned the Matrix movies. Although the movie isn't short, at 132 minutes, it flows at a nice pace. None of the action sequences detract from the personal moments, such as when Evey visits her television host boss, and discovers he is gay, and then witnesses his abduction by the brutal police.

The film is also unnervingly close to home. Today we witness our news coverage being manipulated by governments, fanning the fear of terrorism and pandemics. New security measures are tightening the leash on personal freedoms. For anyone who is already a bit nervous about encroaching conservatism in government, V for Vendetta will serve as, if not a warning, then perhaps even a call to arms.