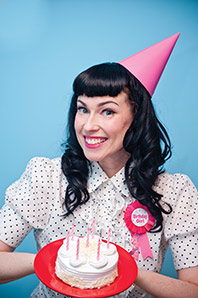 Josephine Cleo will perform at the London Music Club on April 27.


Josephine Cleo is bringing her big voice and big personality to the stage once again in a can't-miss show.

The April 27 performance at London Music Club will be Cleo's third concert in London, but this show promises to be a little different. In celebration of Cleo's 40th birthday on April 25, she'll be singing songs that she said encompasses where a person is at 40 years old.

“Forty is the old age of youth, and fifty is the youth of old age” is a quote by author Victor Hugo that Cleo said sums up how she's feeling about her upcoming birthday. “That's exactly how I feel. I'm energetic and I'm youthful, but I'm on the other side now. You've reached the midway point, if you're so lucky as to live to 80.”

Though this is a show celebrating Cleo's 40th birthday, it's really a show for everyone of any age — though it is 19-plus, as the Music Club is a licenced venue.

She plans to perform songs by well-known singers such as Frank Sinatra, Barbara Streisand and Ella Fitzgerald. “I'm heavily influenced by people such as Bette Midler and Idina Menzel and Kristin Chenoweth,” Cleo said. She will be accompanied by Zach Havens, of the band To Tell, on piano. She promises to bring the audience a night of “toe-tapping tunes, timeless classics and powerhouse show-stoppers.”

She said she tends to draw from the Broadway world. “I just like the classic voices of yesteryear: people like Judy Garland, Bette Midler, Barbara Streisand, that kind of style. I just find that that is what my voice is best suited to, that kind of classic, clean-sounding voice,” she said. She's been hard at work practicing her songs for the past few weeks. “Because it's an intimate venue, I want to make sure that the songs are top-notch.”

In addition to singing, Cleo will also be telling stories, a part of her show that always draws big laughs from her audiences. “After my first show, the feedback that I got was mostly about the stories that I told in between songs.” People didn't always know the songs she performed, but they enjoyed the stories, she added.

“I always make a point to prepare good stories, because, for me, a show isn't just about watching somebody stand up and sing. They have to be entertaining throughout the whole thing. My show is kind of a (combination of) excellent music and ... a humourous element, because I tell funny stories and people seem to think that I'm hilarious,” she said with a giggle.

Cleo is adept at combining prepared stories with improvised jokes during her show. “It's the things that you don't prepare that are really the funniest elements, when you're just being you,” she said. “You have to be able to wing it under pressure.”

The show is really just meant to entertain people. “I want to give (the audience) value for their money, because people can go anywhere for entertainment; they can go to the movies, they could stay at home and watch Netflix,” Cleo said. “To get people out of their houses is a big deal. I want to make sure that when they come to the show, they're ... able to forget their problems for a couple of hours and just have fun. That's what a concert and music is supposed to do: make you forget your troubles and have a good time.”

Cleo hits the stage on April 27 at the London Music Club (470 Colborne St.) at 7 p.m. Tickets are available in advance on Cleo's site (josephinecleo.com) through PayPal for $12, or at the door for $15.