The search for London's SOUPerstars 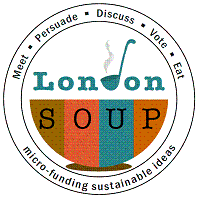 
How is a bowl of soup like a community?

Gary Zavitz has the answer.

“It's about combining ingredients together — something savoury and something that has the aroma, that inviting quality to it. Such is the idea of events like LondonSOUP and others. There's that whole welcoming concept — everything in the one bowl.”

Zavitz, along with Meriel Cromarty, Shannon Kamins and Patricia van Diepen, all have a passion for sustainability and making London a better place to live, which is why they started LondonSOUP, a micro-funding organization that awards cash to people with sustainable ideas.

The four met at a food forum event by the London Community Foundation, where they learned they all shared an interest in food and sustainability. From there, they came up with the idea to bring a SOUP event to London. LondonSOUP is part of the Sunday Soup network, which spans across the world.

The idea is SOUPerbly simple: four presenters make a five-minute pitch to an audience about an idea for a business or activity. The team is seeking ideas with a sustainability angle, meaning pitches can have “something to do with localism, conservation, local food — a number of different things that relate to that underlying sustainability theme,” Zavitz explained.

“One of the benefits of this is that (people pitching their ideas) get a built-in test market situation where maybe 50 to 100 people come out and give them a free focus group. They'll be able to test their ideas. For the person who wins, well, that's great — they'll get a little bit of money.”

The audience members each pay $10 to attend the event, and are each given one vote. At the end of the night, the pitcher with the most votes is given $1,000, which comes from ticket sales and local sponsors, to make his or her idea a reality. He or she will also receive a business skills workshop provided by London's Small Business Centre.

The whole event takes place over some steaming bowls of delicious soup made from locally sourced ingredients. “Food is a great equalizer; everyone ‘gets' food, everyone needs food,” Zavitz said, adding that since not everyone needs the same kind of food, the organizers are offering a vegetarian and a carnivore option.

The team received eight ideas for their inaugural event. From that number, the final four will be chosen to be pitched at the first LondonSOUP event on April 14. The LondonSOUP team plans to hold three more events this year, and the next event is slated for June.

Zavitz and his team are eagerly awaiting ideas for their next event, and students are encouraged to apply. “(It's) a very warm, almost soothing (environment); you have the soup there, you have the whole community there.”

LondonSOUP has drawn some comparisons to Awesome London, another local microfunding organization, and Zavitz discussed this with a smile.

“London is going through some tough times. It has for the last few years. But there are people in this fair city who want to address that, and they want to make things better, and you're going to see them this Sunday night,” said Zavitz.

Check out LondonSOUP's first event on April 14 at APK (347 Clarence St.). It begins at 5:30 p.m. Grab tickets for $10 at londonsoup.ca. Like LondonSOUP on Facebook at facebook.com/LondonSoup and on Twitter @LondonSOUP.