In only its fourth year, The Bonnaroo Music and Arts Festival stands in a class of its own, And has even been named Festival of the Year by Pollstar, Spin, Billboard and Rolling Stone. Bonnaroo is held on a 700-acre farm in Manchester, Tennessee. And includes eight music stages and a 100-acre entertainment village. Bonnaroo is not only a music festival. It's a community of the most unique people you will ever meet. It inspires a peaceful vibe and music that ranges from rock, jazz, reggae, hip-hop and bluegrass to singer/songwriter and electronica. In July 2004, Rolling Stone Magazine included Bonnaroo as “One of the Fifty Moments to Change Rock & Roll” and it is truly an experience that you can only truly understand once you've been there. 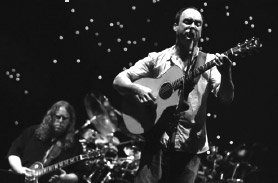 I've been traveling to shows for 10 years, and Bonnaroo has been the most powerful musical and emotional experience that I've had. This year's line-up of music was, in my opinion, the most musical talent I have ever witnessed in one place. I can't go through the list of 70 bands, but let me tell you about a few.

One of the most amazing performances this year was given by an amazing jam-band supergroup called The Word, led by pedal steel guitarist Robert Randolph. This band also consists of John Medeski (Medeski Martin & Wood) and The North Mississippi Allstars. This was a high-energy show combining elements of rock and the beautiful sounds of Southern Gospel. The Word's performance left Bonnaroo fans with something to rave about for years to come.

I've seen a lot of great hip-hop acts in my time. Honestly, this group has soul and a flow that delivers in a way that I have never seen before. It was amazing! This year Jurassic 5 captivated the audience with their funky beats and vocal harmonizing. It was all love that you could feel from Jurassic 5's phenomenal stage presence. They are truly one of hip-hop's finest.

Now, let me start off by saying one word to describe this next band; Incredible. If you saw this jam, you would fully understand why. Herbie Hancock's Headhunters 2005 had people by the feet. I mean their dancing feet. They had people grooving like they never knew what it meant to groove on the dance floor before. This memorable jazz-funk jam was also led by John Mayer and ?uestlove (The Roots). Herbie Hancock's Headhunters 2005 performance was an exploration of music without any limitations.

The next band has become truly innovators in music today. The Mars Volta overnight set captured the imagination of all Bonnaroo fans. This is a band that you watch and know that they put their heart and soul into their music. It's innovative, passionate and crossing elements of all styles of music. The Mars Volta, led by singer Cedric Bixler-Zavala and guitarist Omar Rodriguez-Lopez, left the audience breathless.

You should also check out this diverse musician from Australia named Xavier Rudd. One man, three didgeridoos and a stage full of beautiful instruments leading fans into a performance that was truly inspiring. His music was powerful, emotional and along with it was a peaceful vibe that reminds you that music is something that comes from the heart and soul. From a distance it sounds like a full band on stage. It is, though, just one man who you can truly see loves music and has a message for the world to hear. Rolling Stone has reported that Xavier has been breaking record sales at festivals across North America. You will definitely be hearing his name for years to come.

I still even haven't mentioned some of the bigger names - such names as Dave Matthews Band, Widespread Panic, Trey Anastasio, Jack Johnson, The Black Crowes, The Allman Brothers Band, Modest Mouse, Gov't Mule, Bela Fleck Acoustic Trio, Galactic's Krewe De Carnivale and so forth. This list of bands is so exceptional, that I can (and do when I meet anyone that will listen) talk for days.

Bonnaroo is a festival that has an amazing energy where you feel completely free. Free to be yourself, and free to feel the love of thousands. Trust me, go to Bonnaroo!! You'll thank me. Bonnaroo is a music and arts festival that is very unique and like no other. Once you go, we'll talk, chill, reflect on the good times and have some beers. Until that moment everyone, Peace.