I love toys and I see them (and their packaging) as mini works of art that you can sometimes play with. I leave my Simpsons and Star Wars toys in the packaging but my McFarlane monsters and horror creatures (except the Movie Maniacs series) and my Marvel Legends all come out of the package to play. 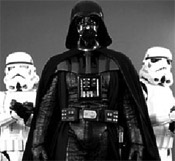 In my most recent trip over to Toys R Us, after picking up some delicious brews, I almost dropped dead at what I found: the new 500th Commemorative Star Wars figure of Darth Vader in his chamber from The Empire Strikes Back. I didn't think that we would be getting this figure in Canada at a chain store and thought I may have to pay big bucks for it on eBay. After examining that this figure had no French writing on it (like many Star Wars figures in TRU have because they're manufactured in Montreal), I picked it up and gleefully purchased it.

I know what you're all thinking: what an f'n nerd! I don't care! You should see this damn thing! It is one of the best Vaders ever made. It even has a lever at the back that allows you to put the dome of his helmet on or take it off. You can let Vader style however you want!

The packaging is pretty sweet, too. It's not in a typical blister card, but a cylinder shaped container allowing you to see the toy in all its glory without taking it out of the package — which I don't plan on doing anyway.

If you're a toy fan or a Star Wars fan, Hasbro did a really fine job with this one and I think everyone (who collects these things anyway) should find one and pick it up. If you have a collecting fetish or are looking for a certain toy or want to sell one, email me at popeyepopsolive@hotmail.com and let me know and I'll put your request into my toy column. You can even send me your reviews or recommendations on hot toys. I know I'm not the only one out there…hence the popularity of Heroes toy store downtown or the popularity of Toyfare magazine. Let's unite and flood the pages of the Interrobang with toy goodness.

Oh yeah, I give this Vader a perfect score: 10 out of 10. Wow…500 modern day Star Wars toys already. It seems like yesterday that I picked up the first 90s packaged Boba Fett and Darth Vader. It all went downhill from there. You wanna see some pics? Go to http://people.1up.com/do/my1Up?publicUserId=5647754 or go to www.1up.com and look for the gamer eat_meahX8.