Mature students give their advice to fellow Falcons 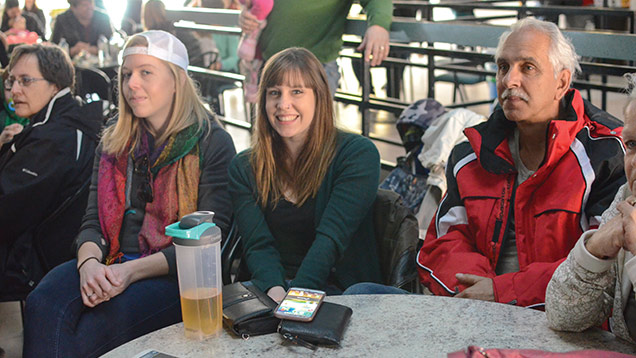 Attending Fanshawe Student Union events can be a great way to make new friends at Fanshawe.


The first day of college can be exciting, but also stressful. Although you are looking forward to starting a new chapter in your life, making new friends and learning new lessons, you worry about feeling lost, alone and behind on your work.

Every student feels this way, including those who previously took another post-secondary program.

“I can say Fanshawe’s London Campus has tripled in size, so I’m kind of lost being in there the first time around,” said Lisa Morren, a first year Social Service Worker student, who returned to the college for Pre-Health Science last year after taking Office Administration in 1993. She said the workload also increased, but explained the programs are different.

“I think I had six courses last year in first semester and that was a heavy course load in comparison to only four or five [in my] first and second semester for Office Administration,” she said.

Morren is more focused on school than she was in the past, especially since she is paying for her education. Other students noticed a difference in their work habits after dipping their toes into post-secondary education for the first time.

“In university, I definitely partied a lot and school wasn’t a priority [and] my grades reflected that,” she said. “Just being a mature student, I had already gotten a lot of that partying out of the way and now my priority is school and my grades are reflecting that.”

Zachary Green, a second year Music Industry Arts (MIA) student, also studied at the University of Guelph before attending Fanshawe. While he plans to complete his psychology degree eventually, he switched to college to gain more practical skills.

“You definitely have to be a hard worker in post-secondary, whether it be college or university. The thing with my program is they’d rather you already have been in post-secondary before applying, because my program’s really intense,” Green said.

Some students are worried about being older than most of their classmates, but social service worker student, Steve Martin, said that shouldn’t be a concern.

“There will most likely be other mature students in your program,” he said. “Even if there isn’t, you can still make friends with the younger students.”

Along with academics, some of these students have a different perspective on events hosted by their school. After Frosh Week wraps up, the Fanshawe Student Union (FSU) hosts plenty of on-campus events during the school year to make sure students are having fun in between their studies. However, some may feel too old for these events. FSU president Alan Bushell said he didn’t participate in orientation events during the first few days.

“I felt that as an older student, it wouldn’t be for me,” he said, but that changed after he attended a Comedy Nooner. “I went to [the Nooner] expecting nothing and I sat down and I made three new friends just by sitting there.”

Bushell said students with previous post-secondary education behind them should use their experience to mentor their younger peers who are attending college for the first time. Some of these students have lessons to share with those just getting started.

Barnett said it’s important to balance other activities, such as clubs and volunteering, with school.

“Definitely get involved, there are so many opportunities on campus,” she said, adding they give you a break from school if you aren’t keen on partying.

Green recommended to party occasionally, but also to make your studies a top priority and to get to know your professors, which is something he wants to work on.

“I see people who have developed relationships with their professors, and they’re doing absolutely great,” he said.

According to Morren, it is essential to maintain a strict financial budget. “Nothing is worse than moving into second semester and not having any money.”