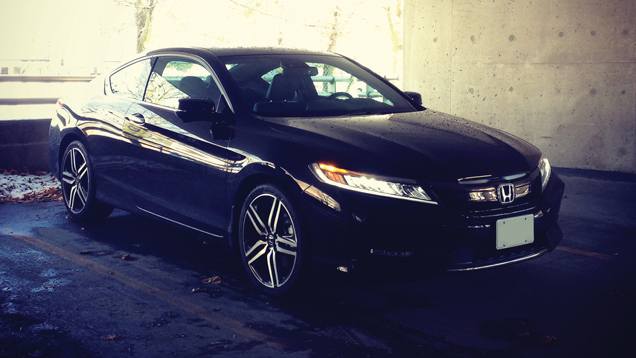 CREDIT: NAUMAN FAROOQ
Unlike Toyota, Nissan, Mitsubishu and Chevrolet, Toyota has not given up on the coupes based on mid-size sedan platforms and given the interior of the 2016 Honda Accord Coupe, the car is nice enough to still be on the market.

Coupes based on mid-size sedan platforms are a dying breed. Hence, there is no Toyota Solara or a Nissan Altima Coupe in new car showrooms anymore. Mitsubishi also abandoned their Eclipse model, and it has been a long time since Chevrolet last sold the Monte Carlo.

Honda, however, still has faith in this segment, and has not only continued to offer the Accord Coupe, but has updated this model for the 2016 model year. Question is, is it still good enough to warrant its place in the market?

From a styling point of view, I’d say yes. Over the last decade, the Accord Coupe has been evolving, and this latest model looks better than ever. The new nose ties it with other new Honda products like the Fit and the HR-V, although the tail end of the car is extremely similar to the previous model.

It is the same story with the interior. Open the door and it will be familiar living quarters for anyone who has been in an Accord Coupe in the last decade, but there are improvements. There is a new touchscreen infotainment system, plus other Honda product goodies like the blind spot camera system, lane keeping assist and adaptive cruise control.

Like the previous Accord Coupe, the 2016 version is also offered with a choice of two engines. There is a base, 2.4 litre, inline four-cylinder motor that creates 185 horsepower and 181 pounds per foot of torque. This motor is available with either a six-speed manual gearbox, or a CVT automatic.

For those who are looking for a bit more performance, they can opt for the 3.5 litre V6 motor, which makes 278 horsepower and 252 pounds per foot of torque. This motor is also available with a six-speed manual gearbox, but thankfully, its automatic option is a proper sixspeed auto transmission, which is a million times better than any CVT.

My tester was the Touring V6 model with the automatic gearbox.

Having driven Accord V6 Coupes with the automatic transmission before, I have always admired the drivetrains smoothness, but it was not as much fun to drive with the manual transmission version.

However, it seems like the clever people at Honda engineering have been fiddling with response times for the automatic gearbox, and as a result, the auto is now better to drive. Mind you, when playing with the steering wheel mounted pedal shifters, the auto transmission still was a little too keen to shift it out of first gear and into second all on its own. I found that a bit annoying, since manual override should mean that the driver is in charge, and I felt robbed of that.

Moving on, the ride of the car is as smooth as ever, and while there is more body rolls in the corners than I would like, one should remember that the Accord Coupe is not a purpose-built sports car. This is an entry-level luxury coupe designed to do everyday chores rather than just be for weekend thrills and it now offers more equipment than ever before.

Any more gripes? Yes, just a few. First of all, the V6 model is a bit thirsty. I averaged 10.9 litres per 100 kilometres in my week, which means it drinks more than the Land Rover Discovery Sport SUV I tested recently.

Plus, while its seats look great and are fine on short drives, my back would always hurt if I spent more than half an hour in them.

With this genre on the verge of extinction, will Honda still bother with an Accord Coupe when it is time to come up with a replacement model in about five years? That only time will tell, but I hope they do.