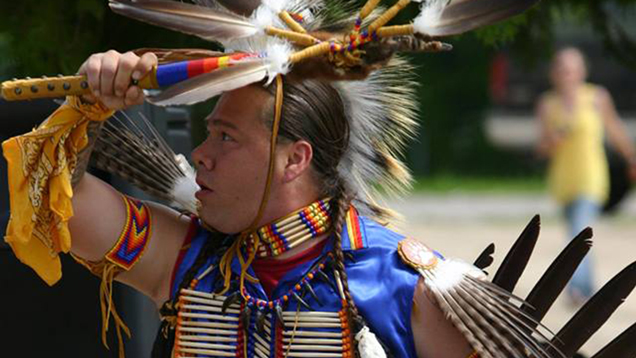 Aboriginal artist and Fanshawe Grad Clayton Samuel King is not only an artist; he is also a Northern Traditional Pow Wow Dancer.


Embracing the style of his heritage, artist Clayton Samuel King of the Beausoleil First Nation community said he discovered his talent as a boy playing in the forest in St. Catharines with his brothers.

“I would go out into the forest and the bush and the creeks and everything that surrounded my home at that time with my brothers and we would often play, and being introduced to that side of the city that I grew up in was kind of like a gateway, like a different reality,” he said.

King just finished up an exhibition in Toronto, just one of many he’s hosted in the past decade. He mostly uses acrylic paint but has experimented with many other artistic mediums including visible and invisible ultra violet luminescent paint.

He arrived at Fanshawe in 1999 to study fine art, but after a personal struggle in his life he took some time off from school in order to focus on himself. The birth of his child pushed his return to Fanshawe back as well, but King did come back to graduate with a Fine Arts Advanced Diploma in 2010.

“I’m a proud graduate of Fanshawe College and I do believe that if I didn’t go back to school [I wouldn’t have been able to accomplish any] of the good things that have happened to me in the last nine years.

He said he was drawn back to Fanshawe because of how good he thought the program was the first time he was a student and that the program helped him develop his skills.

“It’s a talent that you’re born with and it’s a talent that in my personal view has led me to many life experiences… the educational part was more mechanical instruction than anything, but it did help me understand who I was and where I was as an artist at the time and how I’ve been able to develop after graduating,” he said. “There are many things that this program was able to give me that I would’’t have been able to get… I’m forever grateful for it.”

He said his style is based on native woodland art, a style that was introduced into the mainstream in the ‘70s by the Group of Seven.

“My style is an evolution of what I see through many different styles, through what I like to portray with my own unique style,” he said. “It was the nature and the aesthetics of nature that helped me start to create art,”

“Don’t give up, we’re never too old to learn… just keep plugging away and just keep pushing, keep doing what you want to do.”