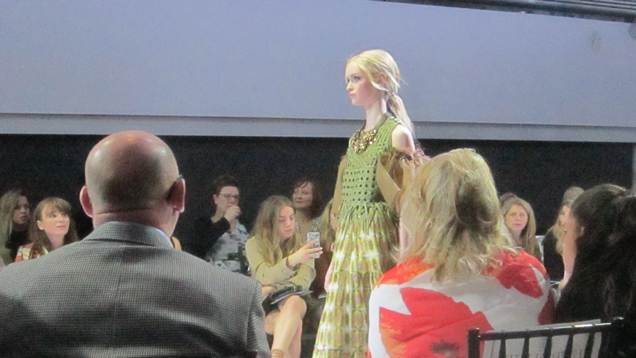 About 300 people saw designs created by Fanshawe College Fashion Design students and alumni at the 10th annual Unbound Fashion Show at Museum London. There were 16 different collections created by the graduating class of 2016.

From Julie Rovere's 80s-inspired “Neo Geo”, to Maxine Archambault's light blue and white “Ocean Breeze” to Adrian Zhao's earthy-toned “The Vein”, it was clear each collection had its own flair.

“Unbound is more than a fashion show,” Colleen Breen, vice president of the Fanshawe College Alumni Association said at the show, “It is the combination of three years of study and hard work by students. A celebration that will help launch these promising designers into careers in the fashion industry.”

Louise Marchand, one of the designers, said Unbound's audience has grown over the past decade. “Our industry really recognized these are new students who will become tomorrow's designers and they really want to come and support us with that.” Marchand also said the faculty played a big part in that role.

“They just strive every year to make it better and better.”

She added that her collection, “Resplendent”, was based off of architecture, design and travel. “There's a lot of Middle Eastern architecture that's very graphic, carved marble and that kind of thing,” she explained, “I took a lot of the architectural inspiration from that and integrated that through my laser cutting in my collection.”

Rovere, who was also in charge of publicity for the promotions and marketing team in her class, said this is the first show where every graduating student involved was able to participate in the evening show. She explained that they have an afternoon show for their friends and family, which also sold out this year.

“They were really scared of us not selling out because we have 16 designers, which is a very small amount,” Rovere said, “There [were] people actually standing at the end of the show who came late.”

Five awards were presented to the students. Zhao earned four of them, including the Gerber Technology Award of Excellence, Most Promising Graduate, Best Branding Image for Unbound 2016 and the David Dixon Award for Outstanding Achievement in Line Concept and Creation. Marchand also took home the Gerber Technology Award of Excellence and Best 2017 Spring/Summer Collection.

“We had no idea who it was going to be,” Rovere said about the awards, “There were so many good collections.”

Fifty fashion design students in either their first or second year of study also worked behind the scenes at Unbound. However, there were many other faculties participating in the annual event. Theatre production technician students and visual effects and editing students created the runway for the show on the upper level of Museum London.

“As a Fanshawe Graduate, I'm always eager to celebrate the amazing experiences that are happening at Fanshawe and the incredible people who make these events possible,” Breen said.
Fanshawe students Fashion Unbound

1
Fanshawe student awarded inaugural scholarship
2
If the shoe fits, wear it: How to find your style
3
Fanshawe fashion film gets big nomination
4
Cultural almanac for 2023
5
Protecting your clothes through London winters