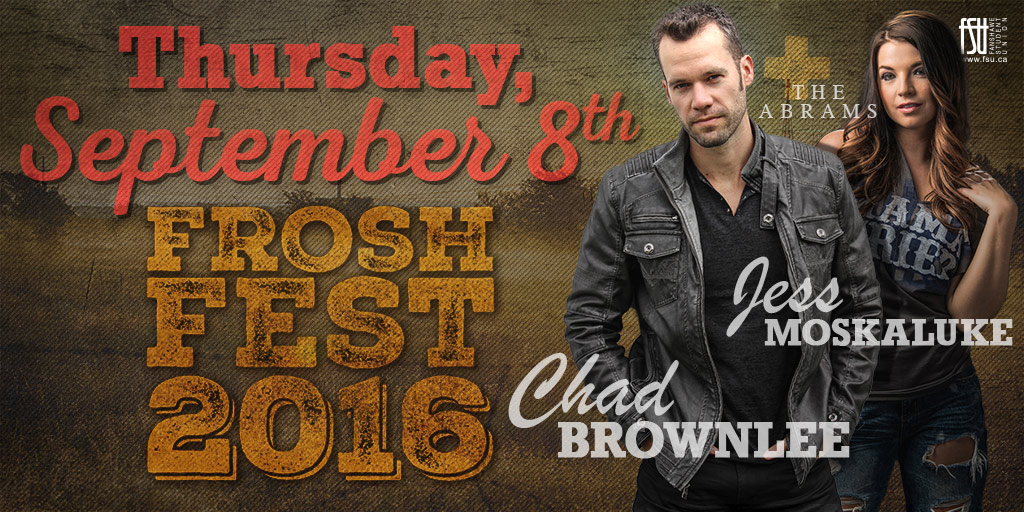 Canadian Country music stars Chad Brownlee, Jess Moskaluke and The Abrams are set to play at Fanshawe during Frosh on Sept. 8th.


A trio of Canadian country acts are set to impress Fanshawe students during this year’s frosh concert.

Multiple Canadian Country Music Association (CCMA) nominees Chad Brownlee and Jess Moskaluke will headline the evening, with The Abrams kicking off the show. The concert is set for Sept. 8th, at 8 p.m. in J-gym.

Tim Fraser, FSU events and activities programmer is looking forward to the event, and thinks it will be a good time for everyone to enjoy.

“Chad and Jess are just fantastic and The Abrams are a really, really great up and coming group.”

This will be the first time both Moskaluke and The Abrams have played at Fanshawe, but Brownlee played a sold out show four years ago.

Fraser said since the acts were going to be in town during frosh week due to the CCMA Awards, it was a good idea to have them perform.

“Why not have two headliners instead of one,” he said.

According to Fraser, who has been organizing these concerts for four years now, he said this year will be a huge turnout, but country music is what really gets people interested in the concerts.

“Country is just the biggest genre that there is right now, even with our student population,” he said.

According to Fraser, the school did a poll of what kind of music Frosh goers wanted to have at concert, and country was the front-runner genre.

Though the events can be stressful to co-ordinate, Fraser said in the end it’s all worth it.

Fraser said he knows not everyone likes country, but it’s still worthwhile to attend the event.

“[Just the] sure talent of the acts is amazing and great [it’s a] great way to kick off the year,” he said.

Dunford thinks a frosh country concert is a great idea because London in general is heavily into this genre.

“I think it also welcomes a lot of people who haven’t heard a lot of country before to experience country and see what it’s like,” he said.

Dunford said some people might not understand what the atmosphere is generally like at country concerts, but now they will have the chance to experience it.

Along with Fraser, Dunford thinks it’s a good idea for people to come to the show.

“For anyone who hates country or doesn’t like country [they] should try to at least listen to some or even come to the concert. It might change their mind a bit.”

Whatever your stand on country music might be, one thing is for sure. This will be one big event you will not want to miss.

Students can get tickets with their frosh kits, or they can purchase them for $20 at Biz Booth.