Motoring: The 2016 Alfa Romeo 4C: Built for fun and nothing else 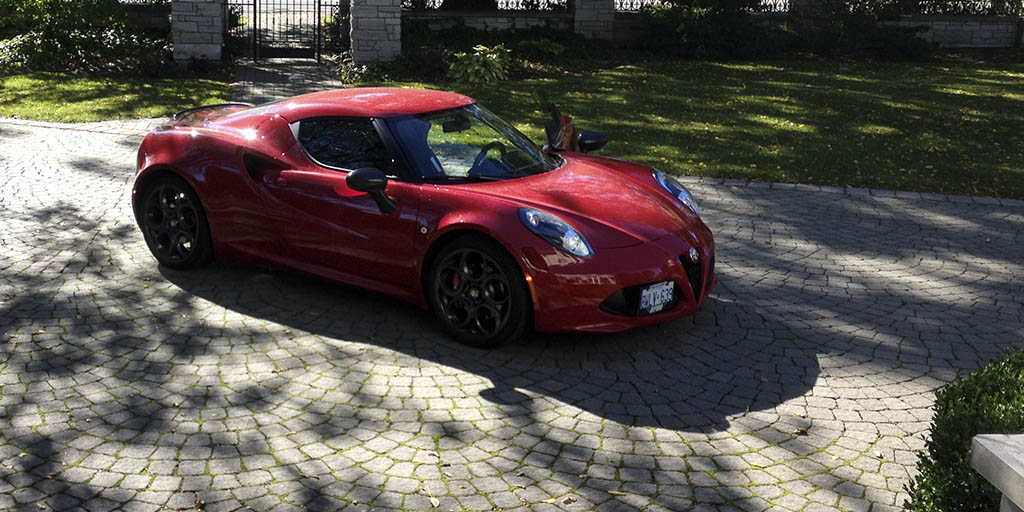 The 2016 Alfa Romeo 4C is built for the fun and nothing else; if you are a talented driver looking for something challenging and rewarding this is the car for you.


The Alfa Romeo 4C is an Italian sports car that marks the return for this brand in Canada.

Let’s start with entry and exit; this is not an easy car to get in and out of. Once inside, you’ll find the confines to be quite cramped and visibility out back or over your shoulders is limited. Its stereo seems to have escaped from the ‘90s, and most people would also say that it’s a tad noisy.

All of that is of no relevance to me because, as a driving tool, you’ll be hard pressed to find a better one in a new car showroom in Canada.

The Alfa Romeo 4C is built like a traditional sports car, short of practicality and frills, and high on thrills. However, it isn’t a retro- themed vehicle when you look at its specs. For instance, it has a carbon-fibre tub, which is a strong yet expensive material to build a chassis from. It also has a twin-clutch gearbox, which might turn away some purists, but shifts faster than any human can with a three-pedal layout.

For its motivation, rather than using a big, heavy motor, Alfa Romeo opted instead to use a tiny, turbocharged unit. It displaces just 1.75 litres, has four-cylinders and produces 237 horsepower and 258 pounds per foot of torque. However, since it weighs just 1,118 kilograms, and it has that quick-shifting six-speed gearbox, this little Alfa can accelerate from zero to 100 kilometres per hour in just 4.1 seconds, and has a top speed of 258 kilometres per hours.

Numbers are one thing, how a car feels is quite another. The only way to experience that is by going for a drive, but that was not exactly easy to come by. Alfa Romeo Canada does have a 4C in their press fleet, but when I enquired about it, I was told that it was fully booked out for the year. There are a few privately owned examples in my city, but while I was given a ride in one by its friendly owner, he wouldn’t offer the driver’s seat.

So, one morning, I decided to visit a friend at Oxford Dodge. His company not only sells all the Chrysler, Ram, Jeep and Dodge products, but also looks after Fiat. Plans are underway by them to open a Maserati and Alfa Romeo dealership in London in the near future, and hence the dealership now has some of those products to showcase. The one that peaked my interest is the 4C because it kept evading me.

My friend, however, gave me the keys to the company 4C, and I didn’t even have to twist his arm to get them.

Before he changed his mind on his generosity, I decided to jump in the car, fire it up and go. Upon ignition, its 1.75 litre motor makes a lot of racket. Push the button marked “A/M”, which means Automatic/ Manual, and off you go.

Most cars require time for you to get used to them, and start liking them; the 4C won me over as soon as I left the parking lot.

The more I drove it, the more I liked it. The steering is manual, so that means it is hard, but communicative. The cabin has little sound, so you hear and feel more things than you’re used to in a regular car, which makes it all the more intense. The engine makes all sorts of wiz, bang and whooshing sounds, as its turbocharger huffs and puffs.

Then, there is the speed. Since it weighs so little, its 237 horsepower is more than ample, and it just rockets ahead as soon as you twitch your toe. Its twin-clutch gearbox shifts gears in a blink of an eye, and the gear changes are smooth. If you’re the kind of person who enjoys a car that is physical and demanding, you’ll love the 4C.

I was supposed to be out for 15 minutes, and ended up driving it for an hour.

To spend more time with it, I’ll probably need to save up to get one, and that is not as bad as you’d think. Base price for this mid-engine sports car is $66,495.

What I loved most about the 4C is that, despite its digital technology, it feels quite analogue. It also is not pretentious, this is not a sports car that suggests being user friendly or to be used for everyday driving; it is built for fun, nothing else. I admire cars like the 4C, and would simply love to have one for the rest of my life.