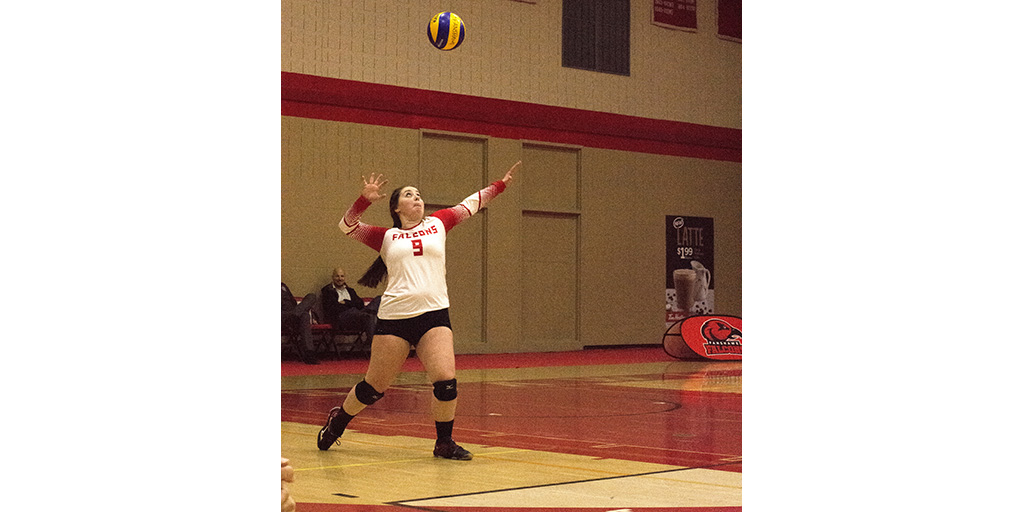 Both the men's and women's volleyball teams had a busy weekend against the Mohawk Mountaineers with both teams falling short.


On Nov. 12, the Falcons took on the Mohawk Mountaineers in some intense volleyball action. The women's team opened the action and the crowd quickly got behind the Falcons as they got a quick 2-1 lead. The excitement in the crowd grew after a huge shot block made by Lindsay Wilcox.

Second set, with the game tied at seven, Wilcox hit a monstrous overpass by the Mountaineers and gave the Falcons an edge up. After yet another kill by Wilcox, the Mountaineers were forced to call a timeout.

Some absolutely key serving from Darian Gropp helped the Falcons pull ahead with seven straight points, which put the score at 14-7. Falcons would go on to win this set 25-19.

The Mountaineers came out with the same intensity in the fourth set that they had in the third. They were up 4-0 before an error was made and that gave the Falcons a point.

The highly anticipated Falcons men's volleyball team is ranked first in all of Canada. They were feeling pretty confident coming into this game facing the Mountaineers who are ranked sixth in Canada.

The Mountaineers would jump ahead in the first set with an early lead of 3-0 before James Jackson put the Falcons on the board with a big time block.

The Mountaineers were making some unforced errors and the Falcons closed the gap to only one with the score at 16-15. Two long-winded rallies would give the Mountaineers some more points, but the Falcons took the first set 25-22.

Both teams came out to strike in the second set with big time kills.

The Mountaineers again struck early in the next set getting the lead. The play went back and forth as both teams traded points until the Mountaineers got three straight points allowing them to pull away and win the set 25-18.

The Mountaineers' momentum from the third continued into the fourth set leaping ahead 9-3. The Falcons quickly got back into it with some great shot blocking, and scored four straight points, closing the gap to two.

Sebastian Lethbridge had a shot block and Van Camp served an ace tying the game at 12. The Falcons continued to control the net scoring five of the next six points taking a 17-13 lead. The Mountaineers stayed in it and made an amazing comeback, and took the lead 21-20. Costly errors would place Falcons down 25-20 losing the set and the game.

Falcons' top athletes for the game were James Jackson with 16 kills, two blocks and one ace and Nate Van Camp with seven kills, one block and one ace.