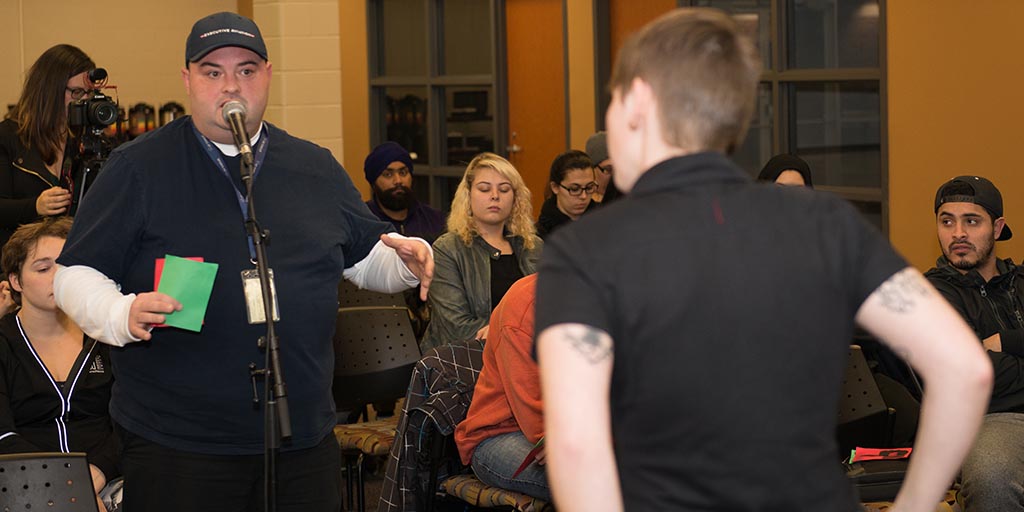 Fanshawe student Paul Laranjeiro stood up in front of a room full of students during the Nov. 29th meeting to ask a question regarding the governance changes because he was worried the workload would be too much for the SAC members going from 18 down to eight. He voted no for the changes.


Amongst free food, coffee and an interesting recap of what has been done so far, the Fanshawe Student Union (FSU) introduced the proposed governance and structural change to students, changes which have been in the works for two years.

The goal of the Nov. 29 meeting was to allow the student body to gain an understanding of what the changes would entail, have their questions heard and answered and finally, vote yes or no for the changes.

At the end of the meeting when FSU president Carlie Forsythe asked the group of countless students to hold up their signs to vote, the room was filled with all but one green sign putting the proposed changes en route to be implemented.

“I am incredibly content with how well received our governance restructure was,” Forsythe said. “It has been a very long process and has passed through the hands of three FSU presidents previously. Fortunately, I was able to be the president who was able to make these changes happen.”

According to Forsythe, it was with the help of Paul Masse, the business manager for the FSU, Carol Balzer, FSU's administrative services manager, and the board for asking questions and being supportive that these changes were able to come about.

Though the decision to make the changes had the majority of the votes on Nov. 29, there was one student who voted no.

“I voted no today because I am concerned that it is going to be too much workload for the eight [SAC members] when it is currently at 18,” said Paul Laranjeiro, a second year Fanshawe student in the avionics program. “Our campus [aviation campus] already doesn't get much exposure to the issues that are being brought forward.”

Laranjeiro stood up during the Special Members Meeting and vocalized to the room why he thought the proposed changes would be an issue, receiving some head nods in agreement from the room.

And according to Forsythe, even though the changes did get put in motion, the FSU is still working with that school to solve the problems Laranjeiro brought forward.

“The SAC representative from that area has already brought up many of his concerns,” Forsythe said. “We are working with Stephen Patterson, Chair [of aviation technology], regarding many of these issues.”

Though there were some problems brought up with the proposed structural changes, the majority of people agreed it should happen and their vote mirrored just that.

According to Natalia Kondratieva, a paralegal student at Fanshawe who was also in attendance at the meeting and voted yes for the changes, Forsythe was able to touch upon all the subjects of worry and interest during the meeting and was able to clarify what these changes are going to entail. 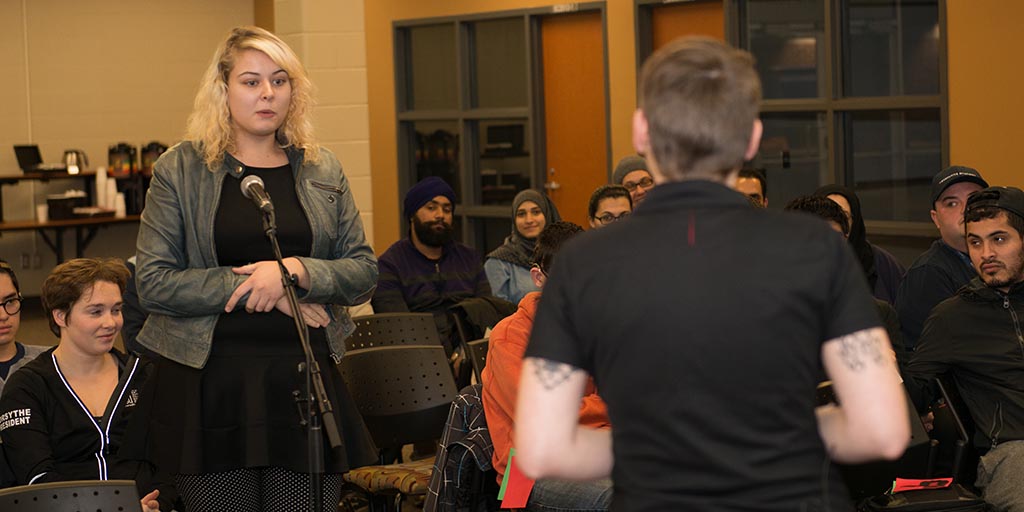 Fanshawe student Natalia Kondratieva also had questions regarding the changes, but was convinced that the new structure would only benefit the student body; she voted yes for the changes. CREDIT: MOUDY DAVID

“I think the meeting was pretty organized, Carlie was pretty clear with her directives and vision for the FSU and I have no complaints about it.”

Before these changes, the structure of FSU wasn't broken down in a suitable way to favour student membership, and according to Forsythe, the president held too much power and therefore was not being held accountable.

“I think the FSU does need to be held more accountable, the issues that Carlie was explaining, she was evidencing as a fact that she is a director of the Student Administrative Council and she was also the CEO/ president of the FSU, [which] is an obvious conflict,” Kondratieva said. “First of all it should be an incremental system where students are able to directly have their voice translated at the FSU level and if she is the president and director of SAC conflict of interests can happen.”

According to Kondratieva, she is impressed that the FSU president is able to stand up for what she sees as a problem and fight for change.

“She is being very proactive in dealing with [the problem] instead of being complacent.”

And proactivity is exactly what can be used to describe the FSU since the changes were made official. The new governance structure will be in full effect when the new FSU administration and the new SAC team are voted in for the 2017- 2018 school year.

“This new structure will require a handful of policies, schedules and terms of references,” Forsythe said. “The elections policy is near completion, I've been working on the board policy and next I'll work on terms of reference.”

Below, there is SAC, which has dropped down by 10 members, going from 18 to eight. Under SAC there is the president, who doesn't get a vote when it comes to decision making.

“This way the president is accountable to the board completely,” Forsythe said. “[At the meetings] the president presents what they have done and the board either says you did a good job or you're not doing enough, you need to do more.”

“By hiring, we get people who are accountable to their roles to actually do their jobs,” Forsythe said. “We can also hire them based on their skills and qualifications which is great for professional development.”

With the new structure, having the students at the top rather than the president and having the president under the SAC, there is a lot more accountability, which is what Forsythe said was her main goal of the change.

“These changes have been a long time coming,” Forsythe said. “We want more effective governance as well... I want the next president to be completely accountable to the students as well as the board.”

And with the new structure, Forsythe's wish will be granted.