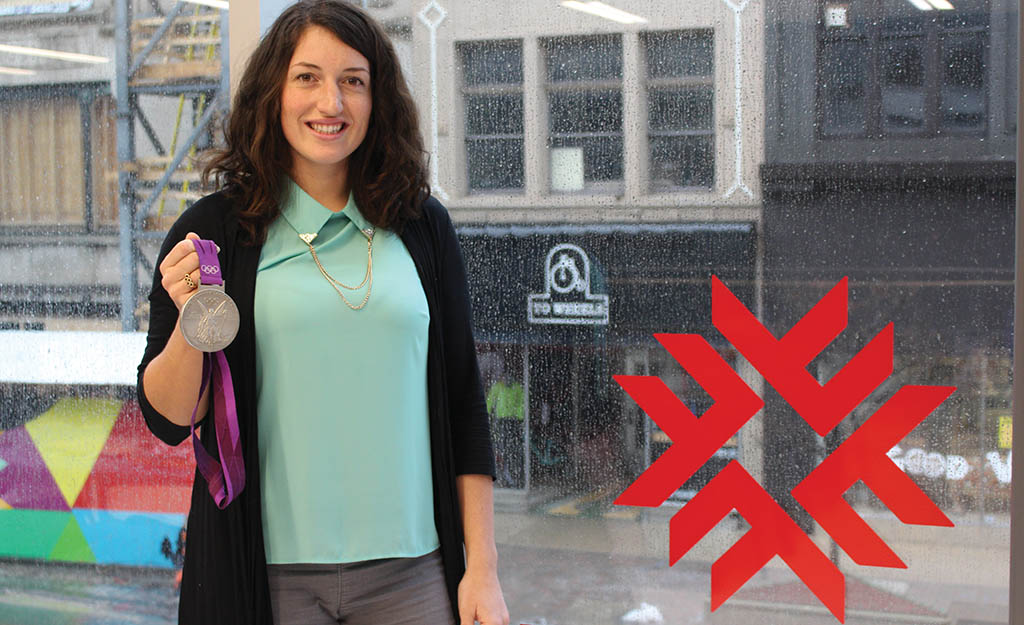 Natalie Mastracci, an Olympic silver medalist for the Canadian women's eight rowing team, has left her athletic career and is now pursuing an education with Fanshawe's interactive media design program.

With that decision, 27-year-old Natalie Mastracci, an Olympic silver medalist, put her blade in the water and gave it her all knowing it would be the last time she appears on an Olympic stage. Though the Canadian women’s eight finished fifth in the 2016 Rio Olympics, Mastracci didn’t look back on her decision; she enrolled in the twoyear interactive media design program at Fanshawe and started January 2017.

Deciding to pursue something in the arts field was an easy one for Mastracci.

“The one thing I have been doing other than rowing all this time was drawing, I brought my sketchbook everywhere and I was just always drawing stuff, at least for right now if I can draw, be creative and think about creative things then I will still have that same excitement and passion that I found in rowing.”

Mastracci graduated from Syracuse University in 2013 with a bachelor of arts in English language and literature, a school she went to on a rowing scholarship.

Her original goal throughout high school was to try and focus on basketball, a sport she played her entire life. But when her friends convinced her to join their rowing team in grade 12 claiming it would “increase her athleticism”, she instantly fell in love.

According to Mastracci, the fact that you were no longer trying to be the best athlete for yourself, but rather for your team; there were no stars of the team, but rather the team as a whole was a star together, this was what captivated her love.

“When I first started and I realized that it was this beautiful sport, that’s what captured me,” Mastracci said. “The fact that I was doing it with my best friends, it put me on the right path and showed me that team dynamic and how much you can love someone and that brings you over the finish line.”

Her love for the sport was readily apparent when people would watch her on the water, with her natural athleticism illuminated by each stroke.

In just five short years, she was an Olympic silver medallist with the Canadian women’s eight, finishing second in the 2012 London Olympics.

“I honestly don’t believe it happened,” Mastracci began, trying to find the words to describe the moment Canada’s boat crossed the finish line. “I am speechless to this day to be able to describe what it was like to have all those years of just trying to be the best rower I could be and then now I have this physical structure of success that says, ‘You have achieved it’, it’s like nothing else in the entire world.”

Mastracci’s international rowing career began in 2008 with the U23 World Championships, a short time after she first started rowing.

Her incredible success in these U23 World Championships continued and she managed to finish fourth two years in a row, finishing with a world bronze the following year of 2010.

After the success with the U23 eight, Mastracci jumped to the senior national team the next year and won a world championship silver with the eight. Her time on the podium was far from finished with three more world championship podiums in 2013 to 2015.

It was the Olympic silver medal finish in London that truly pushed her into professional athlete mode. Mastracci’s days consisted of a strict diet, a rigorous training schedule and little to no time to see her family and friends.

According to Mastracci, her training while rowing at the international level entailed three practices a day with gym workouts dispersed throughout the day when the team was off the water. On top of the workouts and the practices, the team was also required to consume around 6,000 calories to maintain their body weight.

With such an intense schedule, and the endless workouts taking a massive toll on her body, she knew that as her blade glided through the water in Rio, her time as a professional athlete was coming to a close.

“I recognized that the first quadrennial I broke my ribs three times in two years, I had to recognize it isn’t a sport that you can do forever at that level,” Mastracci said. “I am going to live a lot longer than the years that I’m rowing and I want to make sure that the quality of life is still very high.”

The decision to take a step back has drastically changed Mastracci’s life as she now enjoys a more normalized day-to-day schedule.

“After I finished the Olympics… I was interacting in the world again and it was wonderful, it was great to say, ‘You’re having a wedding, I can come to that!’”

Mastracci is looking at her future with excitement, taking each day as it comes and using her familiarity with a strict schedule to allow her to focus on her schoolwork.

“Being able to be back in school, having a schedule, having things that are due, having this self motivated learning schedule that is wonderful, it has really reinvigorated me and made me so excited about life.”