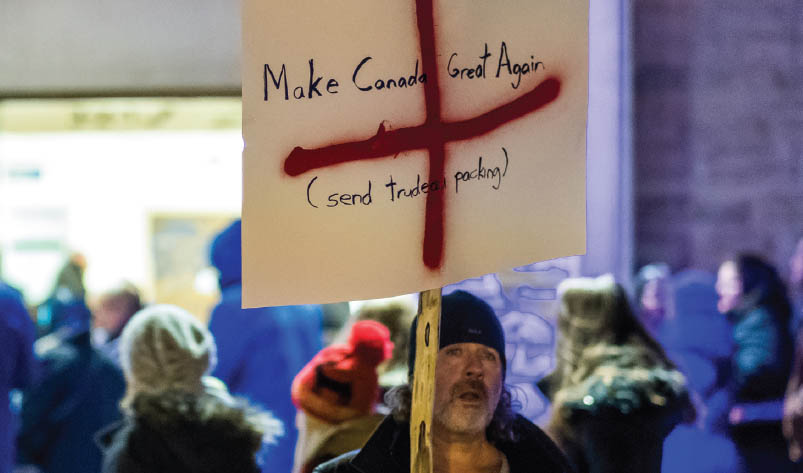 A protestor holding a "Make Canada Great Again" sign stood outside the event hosted by Western University on Friday the 13th.


Editorial opinions or comments expressed in this online edition of Interrobang newspaper reflect the views of the writer and are not those of the Interrobang or the Fanshawe Student Union. The Interrobang is published weekly by the Fanshawe Student Union at 1001 Fanshawe College Blvd., P.O. Box 7005, London, Ontario, N5Y 5R6 and distributed through the Fanshawe College community. Letters to the editor are welcome. All letters are subject to editing and should be emailed. All letters must be accompanied by contact information. Letters can also be submitted online by clicking here.
On Friday the 13th around 2,500 Londoners lined up for the opportunity to attend a town hall meeting featuring Prime Minister Justin Trudeau. Of those people, 1,500 got in and 1,000 did not. I was one of those 1,000 left out in the cold.

I mistakenly thought that Londoners wouldn’t be interested in something like this, and that showing up to the event an hour and a half early, press pass and video camera in tow, would easily get me inside the venue.

Even though I wasn’t able to get inside to see Trudeau speak, I was able to see the impressive line of people, as well as a small cluster of protesters with homemade signs.

Though there were a handful of people silently protesting, one protestor in particular stood out from the crowd for me. This man was holding a sign that read, “Make Canada Great Again, Send Trudeau Packing”.

This all-too-familiar rhetoric caught my eye immediately. With memories from November and cheap red hats flashing back into my mind, it also got me thinking, could the Trump effect come to Canada too?

I’d like to say that I don’t think someone like Trump could win in Canada, but I had high hopes that Trump wouldn’t win in the U.S. election or that the Brexit vote would have turned out differently, so I’m 0-2 right now and should probably stop making political predictions.

But realistically, the outcome of Trudeau’s trip to cities across Ontario on the 13th put something into perspective for me. Whether it was the news of a single mother from Peterborough breaking down over the cost of her hydro bill to the veteran from London despairing over the fact that his pension payments have not gone through after months of waiting, Canadians are not happy with their government.

It made me realize that there are thousands of Canadians who are consistently being let down by their government. And sure, I have my own complaints about the way our government is run. As someone who has held two provincial jobs, I can say with complete honesty that our tax dollars are not always being spent on the right things.

But when people are unable to access basic necessities, like food for their children or electricity for their homes, where there once was patriotism and pride for one’s self and one’s country can quickly turn to hatred and animosity.

I love my country, and I am proud to be Canadian. But I think that part of being a proud Canadian is holding my country and those who run it accountable and making sure that all Canadians have access to the same resources as I do. It’s my duty to make sure that all families have the same standard of living that I am fortunate enough to have.

If Obama had really been that great of a president, would Trump have had the momentum to win? Clearly there were large pockets of the American population who were extremely dissatisfied and unhappy with their living situation, unhappy enough to elect someone whose platform was essentially the opposite of the current president’s.

Therefore it should be Trudeau’s top priority to make sure that those same people are having their voices heard and that appropriate changes are being made to provide all Canadians with equal opportunities and security.

So hopefully Trudeau’s town halls were an actual opportunity to learn about the issues of average Canadian citizens whose voices were not being heard, and not just a publicity stunt.