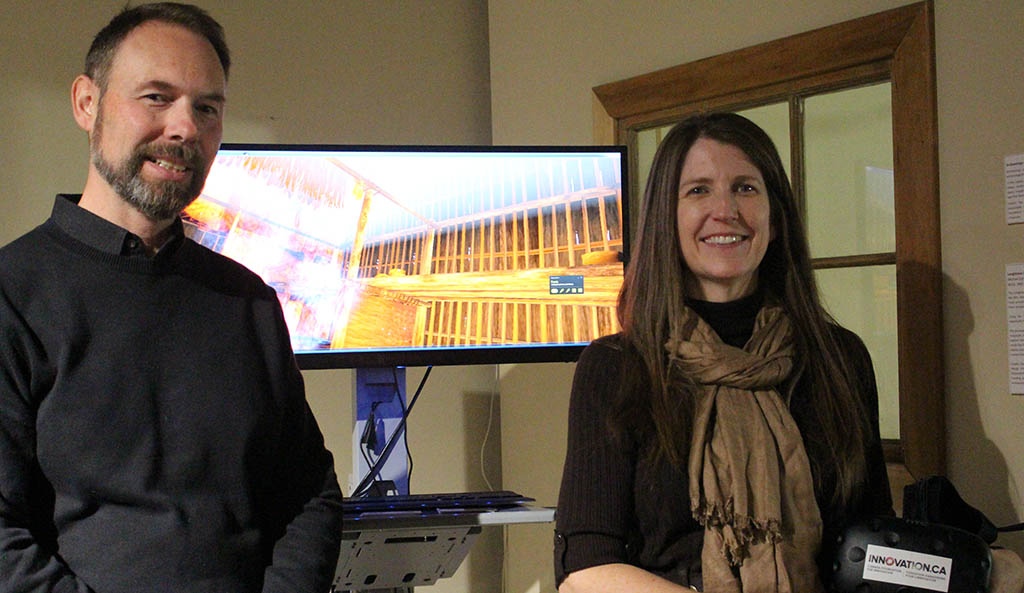 The Museum of Ontario Archaeology introduced a new way of experiencing Iroquois longhouses through virtual reality.


Londoners can now experience an Iroquois longhouse via virtual reality at the Museum of Ontario Archaeology (MOA).

On Jan. 12, the exhibit opened to the public. It is a chance for Londoners to see what it was like to live in one and understand the workings and meanings of a traditional 16th century longhouse.

According to a Jan. 11 press release, the exhibit allows participants to wander through the longhouse and get a sense of what that time period was like, along with the insides of the house itself. Walk past a blazing, cooking fire, see sleeping bunks strewn together with fur and stored food hanging from rafters.

This is the first virtual reality museum in London, and only one of a few in the country where people can immerse themselves within archaeological findings, the release said.

The exhibit is an additional $2 charge beyond regular admission fee for the museum.

According to Rhonda Bathurst, executive director of MOA, this project has been in the works for the past several years and is in collaboration with Western's Sustainable Archaeology group and candidate Michael Carter, who has a background in media, digital media, archaeology and is completing his PhD in archaeology at Western University.

According to the release, the project is a part of Carter's dissertation research that combines an “interpretation of archaeological evidence and ethno-historic records with modern methods of computer generated imagery and virtual reality production”.

The project is also an extension of how the team at MOA and archaeologists are looking at their findings in terms of starting to include digital archaeology.

According to Bathurst, it started out as taking the digitalized objects that they had scanned, printing them and putting them into virtual environments.

“As archaeologists and researchers, this is an interesting way to engage with the past, in a way that we're not used to doing,” Bathurst said.

The 3D digital imaging allows archaeologists to build the longhouses in a way that lets them physically immerse themselves into it, unlike 2D which would allow them to see objects and reminisce of a longhouse, but not feel physically present in one, Bathurst said.

“It's pretty exciting as researchers, it provides us a whole new way of engaging with archaeology and with our interpretations, but as the public, it's also kind of exciting too. This is a new technology to the public,” Bathurst said.

The exhibit runs with HTC Vive reality goggles, which costs a couple thousand dollars, and is used on a large computer, something which Bathurst pointed out, the general public would not necessarily have at home.

Bathurst said MOA provides the space to experience such an exhibit.

According to Bathurst, this new technology is in a sense, a diorama backed up by a lot of research.

“It is just the start of the museum's plans to bring more innovative and engaging technology into our exhibits,” Bathurst said. “We want visitors to have a richer learning experience and to virtually interact with the wide range of excavated artifacts stored in the museum's collections. Visitors will gain a better understanding and appreciation of Ontario's and Canada's diverse cultural heritage.”

According to Carter, the idea of the project was really about being able to see the longhouses before deciding whether to dig them up or not.

“How we can visualize archaeology, you want to actually preserve it and if we just get an understanding of maybe where the longhouses would have been positioned, maybe we could create a 3D version of that first and get a guess of where the site might be and then decide if we should excavate, that's really part of this sustainable archaeology component,” Carter said. “We really don't want to have yet another box of stuff that may take tens of thousands of years to go through because there's a lot of stuff out there, so it's important to really get a sense of, ‘Can I use this in the field, is it useful for archaeologists,' and then, ‘Is it a good way for the general public just to get a sense of when I talk about a longhouse?'” Carter said.

While actually testing out the project, the Interrobang was able to get a sense of what the longhouse felt like, as well as its surroundings.

Paula Cartland, a retired teacher, came to check out the exhibit early as well and had positive feedback to share.

“This is a whole opening up for us, and it's so exciting.” Cartland said. “It was incredible standing there, it was like you're standing right there and you can see the texture of the cloth, you can touch, you feel almost the pieces of wood, the fire adds so much to it because it expands your sense of being there. You can't smell the fire, but it's as if you can.”

Cartland added that perhaps this will make more people aware of the history of indigenous Canadians, which is something she believes society as a whole needs.

The only suggestion she provided was to perhaps have more sound to the exhibit and perhaps scents.

In terms of funding the project, Bathurst said there were multiple contributors including Mitacs Canada, the Canadian Foundation for Innovation and the Canada Research Fund and Western University, along with Sustainable Archeology Western at Western University with Dr. Neil Farris.

Bathurst said they are always looking for more funding, as well as student interaction, such as through work study programs.

Bathurst hopes to continue working on this project and expand it for the future.