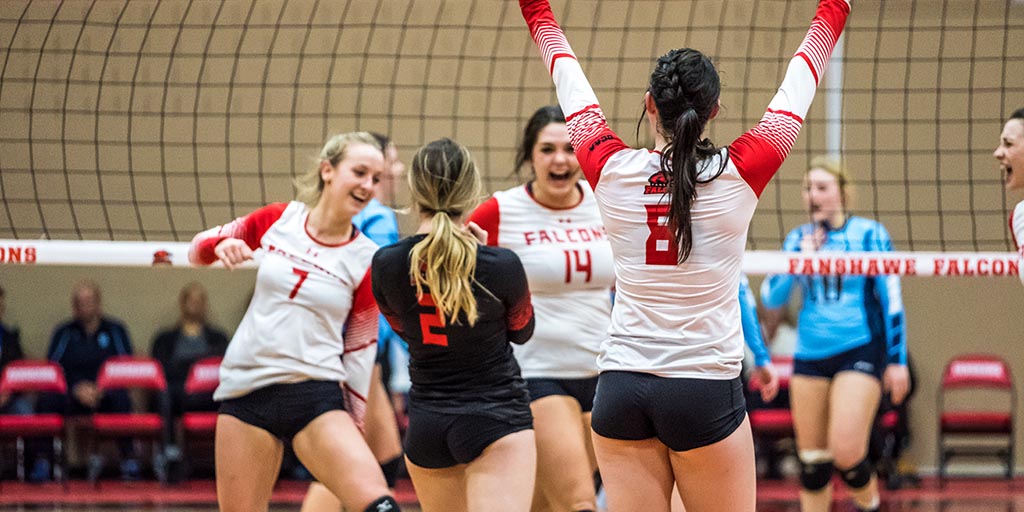 Meghan Morelli celebrates after the Falcons take home a W against Bruins Jan. 26, with her taking home two broken records.

The Falcons defeated the Sheridan Bruins in a four-set match that secured Fanshawe’s place as fourth in the OCAA West Division.

The 19-year-old not only scored 22 kills in one night (the most kills made by a Falcon in Fanshawe history), but also scored a combined 27 points in the match, breaking another Fanshawe record.

“It’s always a great feeling to break school records, but I have my teammates to thank for that success because volleyball is a team sport, and I couldn’t have achieved those records without them,” Morelli said.

Head coach of the women’s volleyball team, Sean Pellow, said that he is proud to have a team that sets up opportunities for their teammates.

Libby Furtado, who scored 15 points at the same game, drew the opponent middle blocker in, which ultimately created the space for Morelli to hit through.

“I am not surprised that Meghan had such a great game, she is a talented athlete; but no athlete can have a great game without her teammates all doing their job,” Pellow said.

Morelli is currently in her first year of the police foundations program at Fanshawe, this being her first year playing for Fanshawe’s volleyball team.

However, she started playing volleyball at the competitive level when she was only 12 and also played for her various school teams since then.

“The thing I enjoy most about the game is the feeling of excitement and fight during a long rally or play,” Morelli said.

Pellow said that he expects that future opponents will be watching out for Morelli.

“I would expect our opponents to game plan against her heavily and I am hoping that her success can create openings for some of her teammates in coming matches,” Pellow said.

The team has a few tough matches against Niagara, Humber and St. Clair coming up which will test them before nationals.

“If we want to make a push for a championship, we need to be better… we would like to still be sitting in 4th coming out of that stretch,” Pellow said.

Morelli said that her goals for the upcoming season would be to medal at the OCAA Championships, and following that, move onto nationals.

“I attribute my success to my coaching staff, my team and my family and friends,” Morelli said. “Without them I wouldn’t be where I am today.”