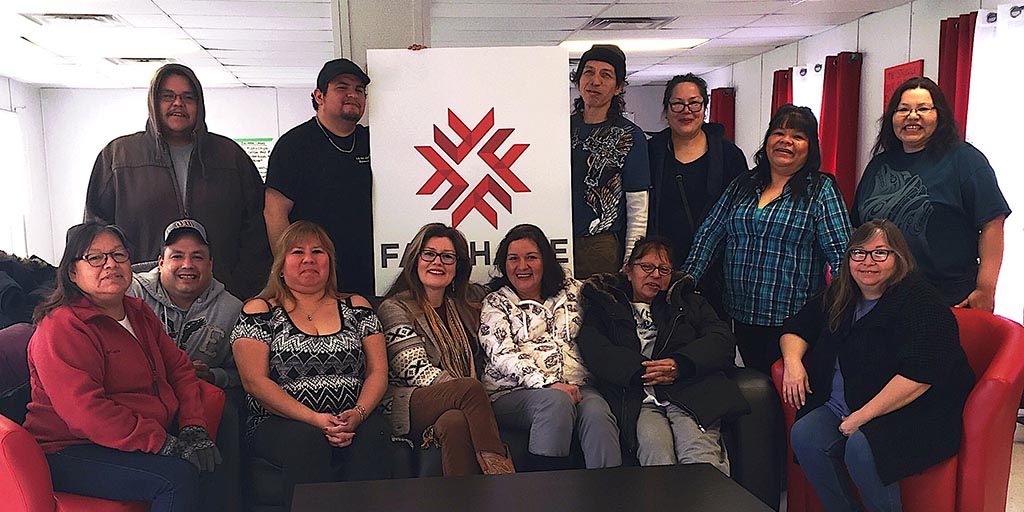 Fanshawe's Lawrence Kinlin School of Business, the First Nations Centre and the Chippewas of the Thames First Nation Employment and Training partnered to create an on-site entrepreneurship program for a cohort of students from Feb. 6 to September 2017


Fanshawe’s Lawrence Kinlin School of Business partnered with the First Nations Centre and the Chippewas of the Thames First Nation Employment and Training to create an on-site entrepreneurship program that began on Feb. 6.

According to Candace Miller, program manager of the Lawrence Kinlin School of Business, this is the first time the one year certificate program at the Chippewas of the Thames First Nation (COTTFN) is being offered with the Chippewas community and will run until September 2017.

Miller said the program is “very intimate” in terms of the number of students enrolled in the program, due to the space given for the course. Currently there is a small cohort of 12 mature students within the program and if all goes well this year, it may continue as a course in the future.

According to Miller, the collaborative idea came about last summer with Guy Williams, manager of Fanshawe’s First Nations Centre.

According to Miller, last semester the college, the First Nations Centre and the COTTFN partnered to create a personal support worker (PSW) program, which prompted Miller to see where the School of Business could contribute.

“There was a definite need and interest in entrepreneurship,” Miller said.

Miller said that there has been a lot of learning involved with the implementation for the program, but that this can perhaps be a model for the future.

Miller said she has been checking in with staff and participates of the program, and it’s been positive so far.

“I’m very passionate about indigenous rights, myself personally and so I’ve always looked for opportunities for us as a school to find ways to better connect with our indigenous community,” Miller said. “I see the importance of recognizing our indigenous communities as well too, historically and present. I’m very proud of this partnership and excited about continuing to do work with our First Nations community and the great thing is that Chippewas is a bit of a leader in terms of reaching out to the post-secondary communities and having some support. They’re really excited and interested in working with us so I can see a lot of good things happening.”

According to Miller, the courses and content taught on-site in Chippewas is the same as that on campus, however there are a few slight changes to the way the class is structured.

Miller said that instead of having six courses spread over a 15- week semester, there will be three intense courses over a seven week period, one at the beginning and one at the end of the semester. This means four sets of three intense courses during one year. Miller said this works since the mature students are more so non-direct learners and that the courses are from a student engagement perspective and student success perspective.

“The students now in the cohort for entrepreneurship are very motivated, interested and enthusiastic in taking on the opportunity of building their own business,” Miller said. “My goal is to support the First Nations Centre and Guy and all the great things that he does with the First Nations community.”

Williams, said the partnership was a way in which the college and First Nations Centre could listen and identify the needs the Chippewas community had and that the entrepreneurship program would help in terms of economic development and future plans the community may have.

“It’s very collaborative, we kind of go from the principle of mutual benefit and mutual opportunity and it’s also the same thing with the students as it is working internally,” Williams said.

Williams said Miller and himself worked together to help design the course, which allows students to also have additional lab time and it’s structured as a weekly program.

Instructors, both indigenous and non-indigenous, teach the entrepreneurship program. They were chosen by the faculty with a collaborative effort with the First Nations Centre and community, based on who had the components and skills needed to teach the students.

“We seem to have greater success when the teachers and instructors are able to build relationships with the students and because they are seeing each other frequently during the week, it offers that opportunity. It’s also more of a collaborative environment,” Williams said.

Williams said the program is bold and agile, but that teaching the students about collaboration is important, as is being creative.

“We’ve had greater success in community settings, and part of it is that one of the strengths of our indigenous students is that they like to collaborate, they like to work together and when they’re in that setting it offers more of that, it’s a comfortable setting for them.” Williams said. “It’s a more welcome, safe environment in the community. It’s a more supportive environment in the community.”

According to Williams, the partnership is a “very positive step forward” that involves communication and learning for everyone involved.

“Our instructors that we have go out there, seem to truly enjoy it. They’re getting the chance to meet indigenous people in their comfortable space, and through that they actually see more of who they are. So it’s been a good thing,” Williams said. “It’s kind of like a recognition. We have our own ways of knowledge and being, and that’s okay, but that doesn’t mean we can’t learn other perspectives and things and take the benefits from that and that’s where we see this. It’s an opportunity for students to enhance their positioning.”