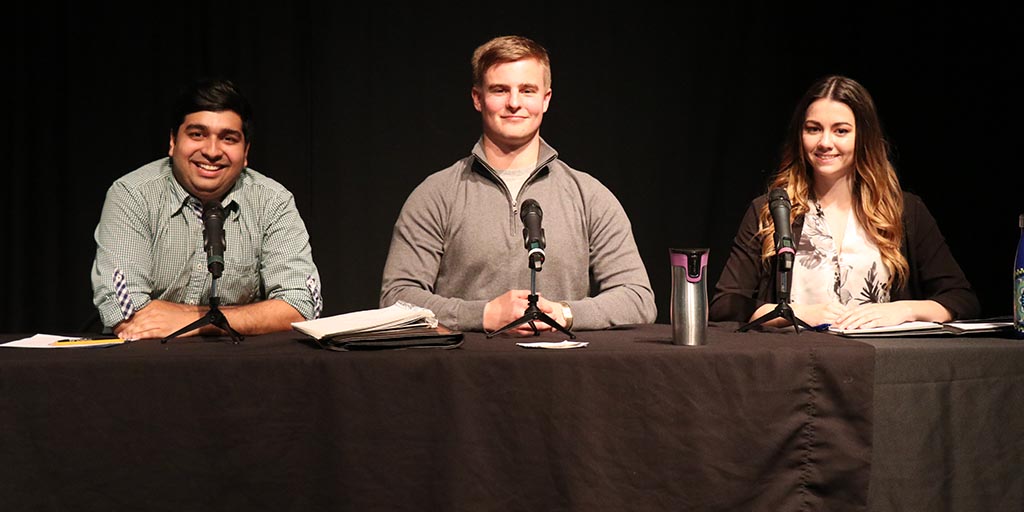 Kevin Kaisar, Josh Mullan and Morganna Sampson are the three students running to become the next FSU president and took part in a Q&A to get their voices heard and the most votes possible.

Current VP Internal Affairs Kevin Kaisar, VP Entertainment Morganna Sampson and newcomer Josh Mullan tried their best to not only give the most impressive campaign speech, but also answer student questions from both the audience, and online. The event was moderated by past FSU president Jason Kerr.

The room was slightly more filled than last year, with free pizza and some candy winning the crowd over.

This year the FSU has restructured their board, taking out all VP positions and instead replacing it with eight director positions. There 10 candidates running for a position, with nine showing up to the speeches.

Three candidates showed up to give their speech for a single coveted spot on the Board of Governors.

The speeches and presidential Q&A format was on March 1, while campaigning began on Feb. 27 and ends on March 9, with voting happening from March 6 to March 9 at 2 p.m.

Kaisar, a veteran of the FSU community said he would work his butt off to become the next president and believes he truly is the best candidate for the position.

He mentioned how he not only has contributed a lot to the FSU and Fanshawe itself, but that being an international student, the school is home to him.

Kaisar recalled how he accidentally volunteered with the FSU in first year, but that mistake was the best “damn” mistake he ever made.

Kaisar said his three pillars he's focused on are experience, passion and hard work, three aspects he can contribute to the FSU. His main weakness is that he tends to take on too much, and identifies as a control freak, but that he's learning how to delegate for better learning experiences.

“Let me be more tired for you,” Kaisar said.

Kaisar said how he's able to negotiate and find that student apathy is something that he's noticed is a problem and would like to fix.

Kaisar also wants to focus on talking about mental health, and having more counselling and discussion for it once the new Wellness and Fitness Centre opens up in the next few months.

Student engagement, collaboration, international student issues and more space was a main theme of the Q&A session, with all three candidates speaking about the need for more study space, as well as more charging spots and outlets for students to plug in their electronics when trying to do their work.

Mullan, a fourth year student at Fanshawe made it clear that although this would be the first time he would be a part of the FSU, he has been part of the athletics department, as well as part of the YMCA Fanshawe College Day Camp program and is focused on not only face to face communication, but also wanting to make Fanshawe an inspirational place, where everyone feels welcomed.

Mullan, whose platform brand is all about student's first, is a heavy advocate for the Wellness and Fitness Centre and health and fitness, and if elected as the next president, would like to see more fitness opportunities for not only domestic students, but international students as well.

Mullan is big into pushing the use of the Wellness and Fitness Centre, making it something everyone can use.

According to Mullan, on top of his strong vision for the future, he finds becoming president would pay his dues for all the services and experiences he has had while at Fanshawe over the years.

If there's one thing all three candidates agreed on, it was to have the FSU be more present around campus and work with the college in a collaborative manner to make sure everyone benefits.

Sampson who has been part of the FSU for the past two years, focused her platform on spacing issues, providing healthier foods so everyone, including those with allergies can eat without difficulties on campus, and reduce the barriers for students to find employment on campus.

She included her idea of FSU's Wellness Wishes campaign as something that made her stand out from the crowd, and said her weakness is that she can be controlling, but she wants to empower others to become leaders as well.

Her one main goal is to have an awesome and collaborative community, one where leaders are engaging, committed and can make things possible for students.

According to Sampson who has a passion for giving back, she believes in the words “do” and “achieve” and wants to objectively represent everyone and just like former President of the U.S., Barack Obama, will not give up, but rather will find a way to solve each problem directed her way. She wants to help make the college “better, brighter” and overall work towards one common goal of “collaborate and an awesome community.”

“Presidency is not a dictatorship it's a collaboration.” Sampson said.