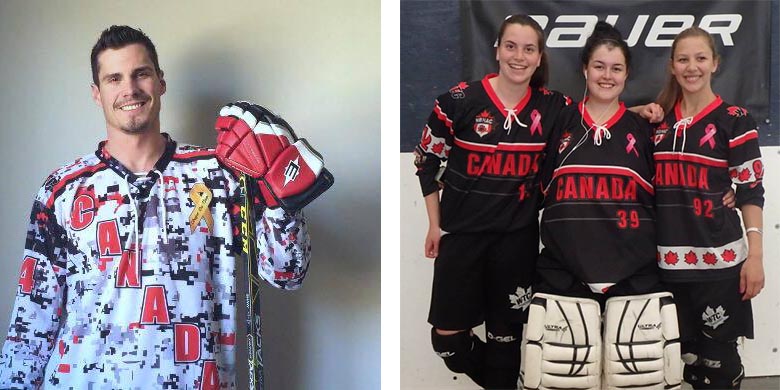 “This team is comprised of highly talented, dedicated and diverse players led by an experi­enced, passionate and motivated coaching staff,” Cindy Horton, NBHAC’s general manager said in regards to the women’s team in a March 5 news release. “Each player has been selected for their athleticism, ball hockey skills, but most importantly for their char­acter they display on and off the floor. When a group of players come together, combining each of these attributes…we have the components for a championship team.”

“Players of this team were brought together because they each bring a unique set of skills and expertise to the team. We are confident that they will in­deed represent Canada well in the Czech Republic.”

Horton said the plan of the tournament is for the team to have an “experience of a life­time” while bonding and mak­ing friends.

“We have a coaching staff that is second to none with a strong team of support staff, ensuring that as a team we are focused on two things. To be living the dream and to bring home gold,” Horton said.

One of the team’s goalies, Dan­ielle Bailey is no stranger to the championships, having previously played in the 2013 and 2015 tour­naments.

“It’s awesome. Third year in a row, it’s a great program to play for and it’s always such an honour to represent your country regard­less,” Bailey said.

Since four new players joined the roster this year, Bailey said in­clusivity is a key focus point for the team.

“Bringing the team together [and] making everybody a fami­ly and having a good when we’re down there and regardless if we win or not, it will be a good expe­rience to head to Europe and get to experience that with present and past players,” Bailey said.

The fact that the championships are in Europe this year is a new and exciting experience for Bai­ley, though she’s also interested in seeing how other teams have de­veloped over the years as well.

“It’s always an honour to repre­sent your country. I love the game of ball hockey and I’ve been play­ing since I was a kid and it never gets old being selected, whether you know you’re going to be or not. It’s just nice being able to literally be on [the team] and go to these different places and meet all these people and play the game that you love with so many differ­ent people.”

According to Bailey, the wom­en had training camp back in No­vember 2016, but will have some upcoming practices and team meet and greets before the champion­ships come around.

Bailey said because games can be unpredictable, mentally prepar­ing herself is the best thing she can do for the tournament.

If there’s one that Bailey is cer­tain about for representing Canada in the championships, it’s that it means everything to her.

“I’m sure every kid, wheth­er you’re a boy or a girl, always wants to be able to play in the Olympics or play something like that, but to be able to do it in a sport that even not many people know about is still great,” Bailey said.

Millington, who first played for Team Canada in 2015, has “very” high hopes for the men’s team as they head into the championships.

“ [I’m] pretty excited. It’s the second time I’ve gone so I know what to expect. The fact that now that I know what it’s all about, I feel like I will be more comfort­able playing,” Millington said.

Millington, who’s been keeping his cardio up and dry training and running for months said this year’s team will be full of new players, specifically younger men, which will help the team be faster and more running based.

Though Millington will be a player in this tournament, the fact that he has prior coaching experi­ence at Fanshawe allows him to connect with coaches and under­stand what they want from him.

“Being on both sides of it, coaching and [being] a player you see the game differently,” Milling­ton said.

According to Millington, he still gets nervous before games in gen­eral, but once the first period is over, he tends to get into the zone and doesn’t pay attention to any­thing around him but the sport.

Going into the championships, Millington said these games will be different from playing in a lo­cal community, due to the kind of competition there is, but it’s all about adaptation and moving for­ward.

“I feel honoured. The fact that I’ve played ball hockey all my life and this is the highest level you can get to, I’m pretty happy that I’m able to represent Canada,” Millington said.