Welcome to this special sex-ified edition of Cinema Connoisseur. It's sexual awareness week, so I thought it would be appropriate to review a film that addresses many of the sex related issues that today's students have to deal with in a frank and serious manner. This week's selection is National Lampoon's Dorm Daze 2.

In Dorm Daze 2, a group of college students have the opportunity to spend a semester studying while on a cruise ship. When not hitting the books, there is plenty of canoodling going on between the youngsters. As a result, there are a few scenes of exposed rear ends and breasts, but it is never done in an inappropriate manner. 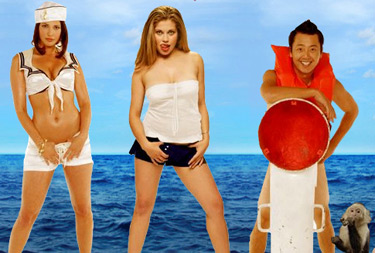 In addition to all of romantic interludes, there is a plotline involving a diamond heist, and another one involving my personal favourite plot device, a monkey.

I've said it before, and I'll say it again — monkey=box office gold. The film's two token (or perhaps tokin') stoner characters purchase a monkey because they are told that you can grind up his bones, and get as high as a kite from smoking them. Of course, they can't bring themselves to do it, and end up with an Xbox playing primate as their new buddy.

Fishel, a.k.a. Topanga, is the standout amongst the non-monkeys in the cast, and will surely receive some Oscar-buzz come next March. After basically falling off the face off the earth following the cancellation of “Boy Meets World”, she returns to the big-time with a daring performance as Marla, a born-again-virgin who may also be a lesbian. This role could do for her what Brokeback Mountain did for Heath Ledger. Anyone who sees this film would surely agree that this is a triumphant return for Topanga. It's great to see her back, although I would have preferred to see her front.

I would go as far as to say that it is essential viewing for all students over the age of six. Sure, if you don't see this movie, you might not get pregnant by the end of the semester. Sure, you might not contract anal herpes. And maybe you won't have to drop out of school, so you can work at McDonald's during the day, and perform oral sex on circus freaks at night, just to earn enough money to feed your baby and pay for your herpes medication. Sure, all of that might not happen. But isn't it worth a measly $7.23 rental fee from Blockbuster to ensure that it doesn't?

Dorm Daze 2 is an unforgettable motion picture experience. National Lampoon, thanks for the mammaries.