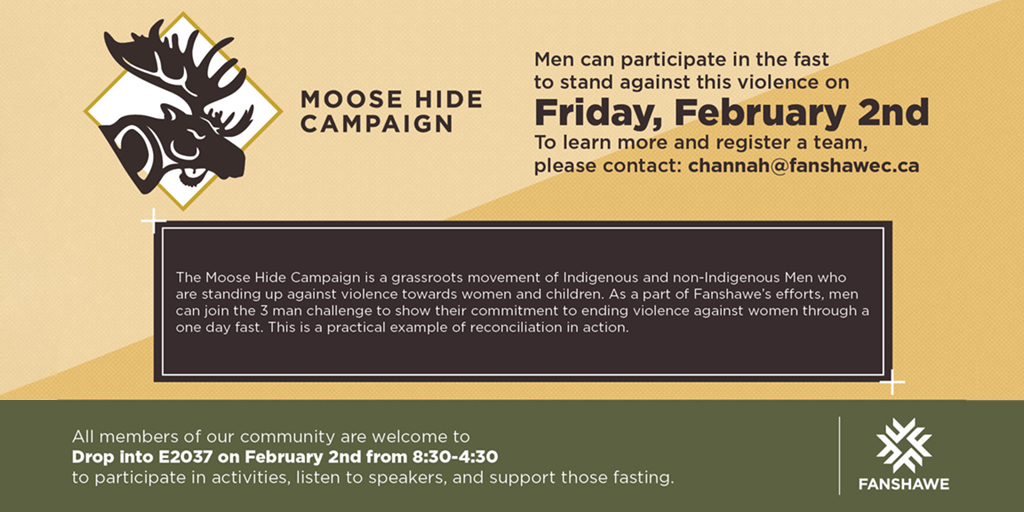 A new campaign is kicking off at Fanshawe this year to bring awareness to violence towards women and children.

Rich Callacott is an Indigenous student from Fanshawe who brought attention to an organization that runs a campaign every year called the Moose Hide Campaign.

Originating in British Columbia, the Moose Hide Campaign was started in 2011 when a father and daughter hunted a moose along the Highway of Tears. They decided to use the moose hide as a movement to end violence towards women and children.

The 10 Men Challenge is a program within the Moose Hide Campaign that began in 2016. Ten male students from grades nine to 11 pledge to fast for the day to show their support to end violence against women and children. This year's provincial gathering and day of fasting will be taking place on Feb. 15 in Victoria, B.C. The program has been a huge success in previous years and is now being done in secondary schools across Canada. With the help of Chris Hannah the student success advisor at Fanshawe's First Nations Centre and Leah Marshall the College's sexual violence prevention advisor, Fanshawe is taking part in the campaign for their first year.

On Feb. 2, there will be a three man fasting challenge for male identified students and faculty at Fanshawe. In E2037, there will be activities and speeches from Indigenous people involved in anti-violence initiatives.

“Often you will see violence against women initiatives targeted or heavily attended by women, when in reality, we need the support of all genders to create a safer, more inclusive community, which is free from violence,” Marshall said.

The Moose Hide Campaign and Fanshawe encourage people to take action, make the pledge, and stand up.

“We would love to see people spread this message of being an active bystander when you observe this type of violence, in order to help end gender based violence on our campus and in our broader community,” Hannah said.

Since 2011, over 750,000 squares of moose hide have been spread to communities across Canada. Government offices, post-secondary institutions, First Nations reserves, and families have all become involved with this campaign.

“We hope this campaign will be a safe and fun way for everyone to participate and to start meaningful conversations about ending gender based violence,” Marshall said.

For confidential support and options as a survivor of gender based violence, contact the sexual violence prevention advisor at 519-452-4465 or lkmarshall@fanshawec.ca. To learn more about the Moose Hide Campaign, visit moosehidecampaign.ca.

Research and Innovation Day is coming to Fanshawe

Research and Innovation Day is coming to Fanshawe

Job seekers should fear the Terminator

Job seekers should fear the Terminator