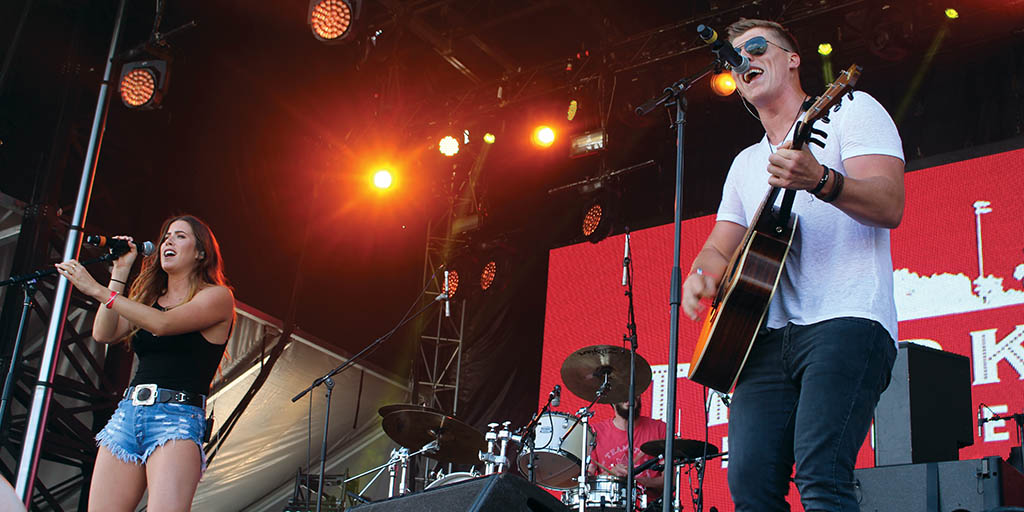 With all the success Jenna and Stu of brother-sister duo The Reklaws have had in the last while, Fanshawe is lucky to have them perform during the Fanshawe Student Union (FSU) frosh concert on Sept.11.


Canadian country music keeps on getting bigger and better and this includes none other than Jenna and Stuart (Stu) Walker, otherwise known as The Reklaws.

The brother-sister duo (whose band name is their last name spelt backwards all thanks to their mom’s suggestion), from Cambridge, Ont., have been working hard within the music industry for a number of years and in a matter of recent months, have seen their work pay off.

During a phone interview with the Interrobang, the siblings explained they grew up on an “adventure farm” that hosted the public to Halloween events such as a pumpkin patch and corn maze. They also had pig racing with the duo singing during the race’s halftime show. On top of this, a number of movies were filmed at the family house, with one of the shoots being the event that changed the duo’s lives.

According to Jenna, while a film was in production at their house, the pig racing and singing kept getting on tape, prompting the crew to suggest the family shoot a reality show. Once they shot a pilot, it was also noted the duo could sing and they should go down to Nashville and write. Even though they were only in their mid-teens, they went off and did just that.

Fast forward to years later and The Reklaws have earned a name for themselves in the country-pop music scene.

After a few more years, they released their popular 2017 song titled “Hometown Kids” as well and 2018’s “Long Live the Night”. The duo’s debut EP titled Feels Like That was recently released on Aug. 31, with seven songs, three of them completely brand new.

According to both Jenna and Stu, they didn’t expect to have their EP out so soon in their career.

“We wrote all these songs at different points in our lives and different points of our career. Some songs are five years old, some songs are two months old, so it’s really, really cool to have that collection, but they say you have your whole life to write your first album and then you have two seconds to write your second. Hopefully we can match the next one, but no, we’re very excited to have all these songs out,” Stu said. “Honestly I think this all just came to such a great way to end the summer first of all for us, and hopefully for our fans as well. It’s really exciting. It was kind of a last minute decision to put out this seven song EP, but it seems to just be perfect timing and these songs seem to make sense and just kind of sum up who we are” Jenna added.

According to Jenna, the EP was mostly written in Nashville, where the duo found a team who understands the kind of music they want to create.

Stu mentioned the duo are interested in taking a path to create country-pop tunes, while they drew inspiration for the EP from other acts who are taking similar roots, such as Florida Georgia Line, Sam Hunt and Maren Morris.

“[They’re] really pushing the envelope as far as mixing pop with the country genre and you can hear on the EP, there’s a couple songs on there that are borderline pop, actually probably more pop than country, but that is the path that we definitely want to take,” Stu said. “We try to stay traditional with a couple of songs, ‘Like Wish You Were Beer’ and ‘Hometown Kids’, we try to stay very country, but we really, really like the idea of where new wave of country is going, we’re trying to follow that.”

They recently presented at the iHeartRadio Much Music Video Awards (MMVAs), where they took part in the awards show’s first time incorporating country music into the mix, which also included Canadian country musician Brett Kissel.

The duo, who’ve also been playing shows and festivals throughout the summer, were part of this year’s Country Music Association of Ontario (CMAOntario) awards and are nominated for three CCMA Awards including the SiriusXM Rising Star, Group or Duo of the Year and Video of the Year categories, on Sept. 9. They’ll also be performing at the awards show.

“We’ve never been nominated before for a CCMA, so the fact that we are up for three is mind-blowing. When we got that announcement though the emails, we were like, ‘this is crazy’ because last year we were just sitting way in the back of the CCMA [Awards show] and now we’re actually able to play on the award show and there’s chance of us winning something, but honestly we’re so happy to be a part of it this year,” Stu said.

To top that, the duo will be getting the party started off at this year’s Canadian Football League (CFL) Grey Cup, during the SiriusXM Canada kickoff show in November.

According to Stu, the two were “blown away” by the chance to perform at the Grey Cup and that everything that’s been happening them has been “another stepping stone of exciting things coming [their] way”.

“That’s just setting the bar for next year, who knows what’s going to happen next year. We’ve had a wonderful year and it’s pretty awesome. Hopefully with those big broadcasts, we’ll be able to show a little more of ourselves and open up doors to new people and a new sounds,” Jenna said.

With all the amazing news coming their way in such a short period of time, it’s a wonder how the two feel about it all.

“I think that’s the craziest part of everything that’s happening. We feel like we’re the same people that were around five years ago, kind of, in our hearts, but I mean that’s just timing. Timing is perfect no matter how much you try to control it yourself, but I think everything’s happening right on schedule and of course we’re completely surprised and feel so humbled by the whole experience and everything that we’re going through and hopefully it continues to get bigger and better and hopefully we create a relationship [with fans] that is strong and goes on for a long time,” Jenna said.

While some might think working with a sibling is less than ideal, Jenna and Stu think otherwise and know when to draw the line between personal life and work life.

“I think we’ve got it almost down to a science now. We know when to wear the business hats and when to be a brother and a sister. I think that definitely in the beginning it was tough, but it’s really starting to change,” Stu said. “Everyone tells us our sibling harmonies overpowers any drama that could be associated with a sibling rivalry.”

Though their career is jumping at a rapid speed the two did finish high school and went to the University of Guelph and have support from their family and friends to continue do what they love.

No strangers to London, the duo is also set to perform at Fanshawe and are ready to connect with the crowd, something Stu said the two always try to do during their shows.

“We’re so excited. This is exactly the demographic we’ve been hoping to play for, since we started all of this with Universal Music Canada and everything. The crowds at the university and college shows are where we thrive, we feel,” Stu said. “We’ve been building this entire show that we’re going to be doing at Fanshawe, for like this age group. They can expect nothing but a party and by the end of the night hopefully they all feel like they know who we are and we know them.”

According to Jenna, the duo gets song ideas from their days in post-secondary schooling and after playing to other college and university crowds, they’ve been able to see these are the crowds that tend to resonate with them and their songs.

There seems to be a connection between The Reklaws and the post-secondary crowd.

“You go through so much in those four years and everyone’s living it and you’re finding out so much about yourself, it’s a scary and beautiful time, so let’s be friends with all these people and help them through, with songs,” Jenna said

With Jenna comparing their show to a “house party”, The Reklaws are ready to show Fanshawe what they’ve got.

‘We’re so excited and can’t wait to meet everyone at Fanshawe and get the party started, “Jenna said.

You can catch The Reklaws headline the Fanshawe Student Union (FSU) frosh concert on Sept. 11 in the SUB courtyard starting at 8 p.m. with Cory James Mitchell Band and Jade Eagleson. Tickets are available at the Biz Booth.