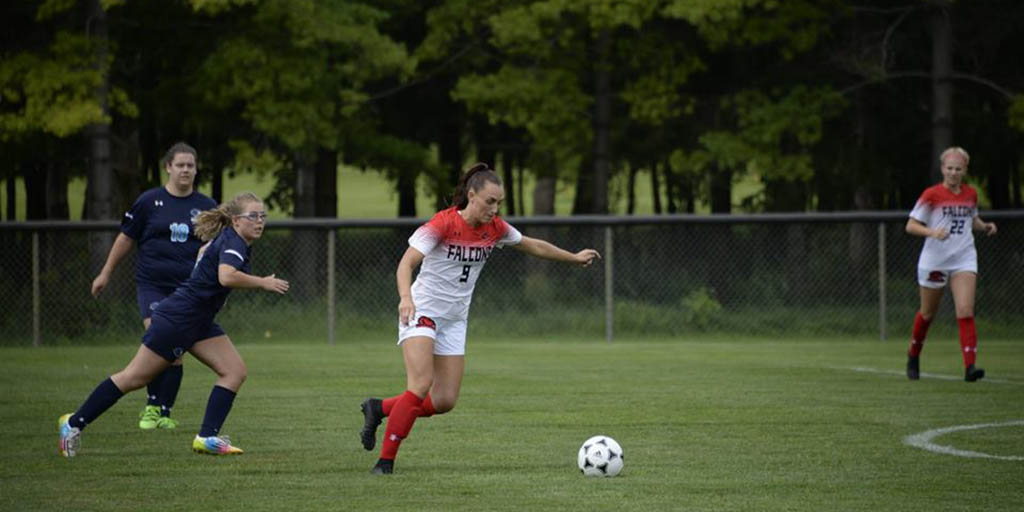 Kovacevic wins national award and helps bring her team to victory this year.

According to a Fanshawe Athletics, Nov.6 press release, Kovacevic, who is originally from Acton, Ont., is a striker with the Falcons. She is the first soccer player to win the national award in Fanshawe history.

A well-deserved award, Kovacevic led her team to a provincial title this season, scoring 30 goals over the season – 15 more goals than her nearest competitor.

She set the Ontario Colleges Athletic Association (OCAA) record for the most goals in one season, as well as the record for most goals in one game: nine, in a game against Lambton College on Sept. 8. She is second in all-time OCAA scoring history, scoring 79 goals over three seasons, just behind Cambrian College’s Tiffany Johnston who set the record of 83 goals over four seasons ending in 2016.

“I was not surprised to see Jade have this kind of success. In my opinion she is one of the top female players in the country and has a professional attitude. This type of success is something she strives for every day,” Mike Marcoccia, coach of Fanshawe’s women’s soccer team, said in an email to Interrobang.

As Kovacevic’s coach, Marcoccia has seen her progress over the past few seasons, but more specifically this year.

“Having coached Jade for a few years now I knew she had two goals this season: to win the OCAA and National Player of the Year. She accomplished both and even took that further and lead her team to a national bronze,” Marcoccia said.

Marcoccia goes on to praise Kovacevic’s positive attitude throughout the entire season.

“It’s important for others to know that even though she had so much success on a personal level, she was a selfless leader who made others around her stronger and always put the team first,” said Marcoccia.

“Jade is a generational talent that combines exceptional character and skill with a very high level of drive and competitiveness. She is a true professional in every way and extremely deserving of this honour,” said Nathan McFadden, Fanshawe’s Manager of Athletics in a media release referencing Kovacevic being named the CCAA Women’s Soccer Player of the Year:

On Nov.10, the Fanshawe Women’s Soccer team won the bronze medal in the CCAA championships. This was the first CCAA medal that the team has won since 2009. The game was against the Douglas College Royals, a team from the greater Vancouver area. Robyn Scott of the Fanshawe Falcons was named Fanshawe’s player of the match, after scoring the first goal to go along with her impressive defensive play. Fanshawe’s Nicole Nielsen netted the second goal of the game, which propelled Fanshawe to a 2-1 victory.

Kovacevic led the tournament with seven goals. She and Nielsen were named CCAA Tournament All-Stars.

[Kovacevic] is without a doubt the top female player who has ever put on a Fanshawe jersey and the countless records will show that. Not to mention the seven goals she scored in a National Competition this past week,” Marcoccia said.

The tournament concluded the season.