Weird Christmas traditions around the world 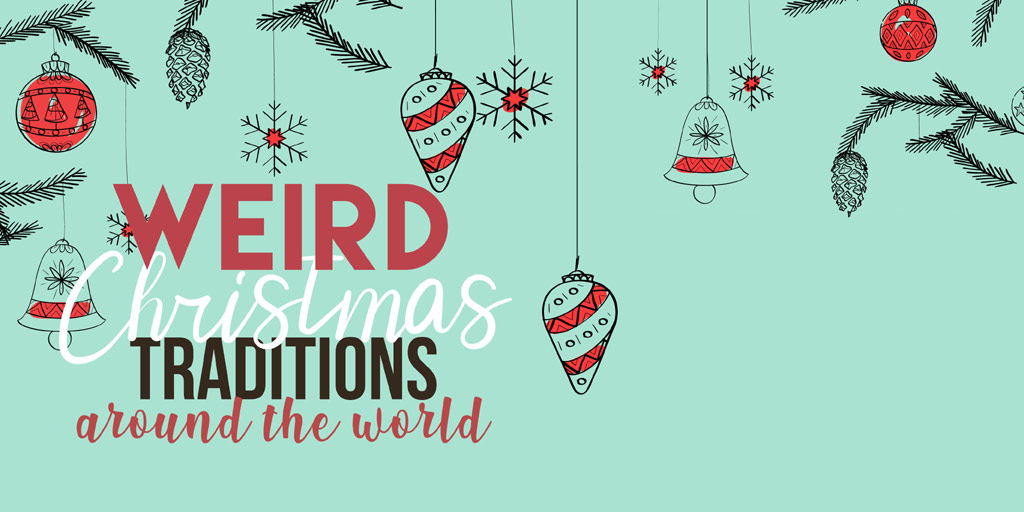 
Almost everyone is familiar with Santa Claus. The jolly old fat bearded man, who leaves good children presents and bad children coal on Christmas Eve by climbing down your chimney. It could even be argued that Santa Claus is a weird tradition, but there are many more odd traditions and stories around the world. From a demon version of Santa to a man taking a dump at Jesus’s birth. The following are just a few of the many odd Christmas traditions and stories.

Krampus is large hairy devil like creature. With horns erupting from its head and the bottom half like a donkey, this odd monster is not something one would typically associate with the joyful holiday season. Krampus pre-dates Christianity. In mythology, he is the son of Hel, the norse goddess of Hel the underworld. No one is sure how Krampus came to be associated with Christmas. It is believed to have been left over from some sort of Pagan celebration. Krampus is depicted as punishing naughty children and is considered to be working with St. Nicholas. Krampus would punish children in many different ways. From giving them a lump of coal to drowning the child and parading the body on his pitch fork. As disturbing as that sounds for a Christmas story, its even weirder to have a day that celebrates this creature. Krampus night takes place on Dec. 5, every year. This night traditionally includes men dressing up as Krampus where they ring bells and carry large sticks threatening to attack misbehaving children.

In Catalonia, they have what starts out be a typical Christmas tradition that many people around the world participate in. Having a nativity scene with Jesus, Mary, and Joseph as well as some other guest like the three wise men and shepherds. However, they also add another guest known as the Caganer. Caganer roughly translates to “ the defector”. This figurine depicts a man squatting with his pants down dropping a hot load. To understand this very odd tradition look no further than to the 18th century. The Caganer would be a man who would poop in the country side fields to fertilize the land. It is considered bad luck to not include the Caganer in nativity scenes. In modern day Catalonia the tradition is still up held and even taken a step further. You can even get Caganers that depict politicians, celebrities and fictional characters.

In Italian tradition there is a witch known as La Befana. Although witches are usually considered evil in many european countries, La Befana is a good witch. La Befana translates to “gift giver”. She is very similar to Santa in the sense that she delivers toys and candy to good children and coal to naughty children. She is known for delivering gifts by flying around on her broom stick. Although similar to the tradition of Santa, she is believed to have been around much longer. Unlike Santa, she delivers her gifts on Jan. 5, the eve of the Epiphany. Her story begins with her being approached by the Three Wise Men. She is asked to join them to go meet baby Jesus. She declines. When Epiphany occurs and the sky opens up like in the Bible, La Befana decides she wants to go meet baby Jesus. She grabs a doll to bring as a gift. However, the star to guide her vanished. From that day on she is looking for the baby Jesus and gives every child a gift.