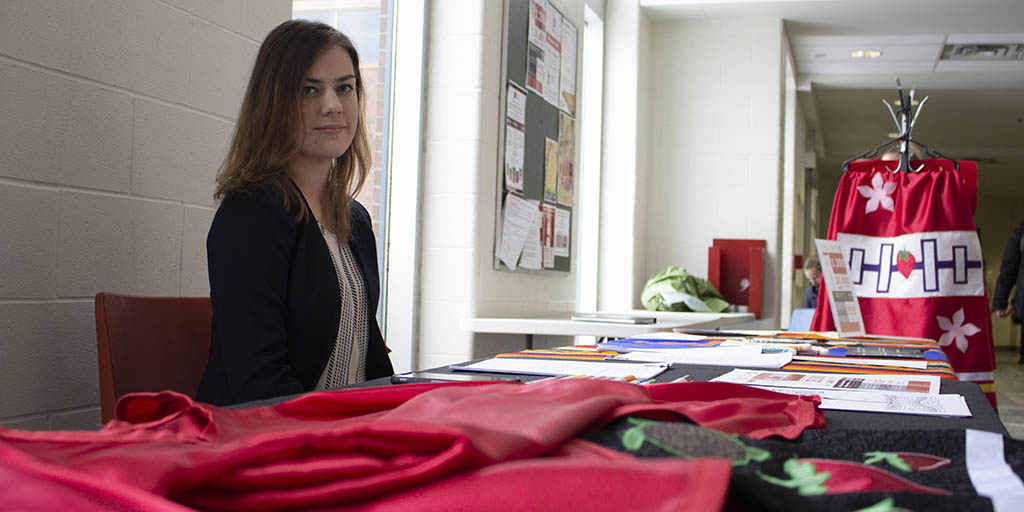 The reality of 1,200 murdered and missing Indigenous women concerns every single Canadian.

“Missing and murdered Indigenous women affects everyone because as a Canadian population I think we tend to think that this is a very progressive, very liberal country,” Hannah told Interrobang in December. “I know that the Canadian government uses native culture to advertise that this is a great place to live internationally, but when you get on the ground and in Canada, native people make up about five per cent of the Canadian population. And the way we are treated and the way that we have experienced life in Canada is not necessarily a liberal or first world life.”

Hannah and Marshall have been collaborating since 2016, when a startling report from the RCMP found 1,181 incidents of Indigenous female homicides and unresolved disappearances between 1980 and 2012. This, along with further investigations from national news media suggesting higher numbers, prompted the Canadian government to launch an inquiry into what it deems a national crisis.

So far, Hannah and Marshall have brought three Canada-wide initiatives to campus: The REDress Project, the Faceless Dolls Project, and the Moose Hide Campaign.

Jaime Black, a Winnipeg-based Métis artist, created the REDress Project to remind Canadians of missing and murdered Indigenous women’s absences by hanging red dresses in public spaces throughout the country.

Fanshawe participates in the project in the first week of December to coincide with the anniversary of the Montreal Massacre, another example of gender-based violence in Canada. 13 red dresses are hung in F hallway, Oxford campus’s most travelled area.

“The red dresses are hung to symbolize the women who should be in those dresses. If people are feeling like it’s maybe a little eerie- looking, it’s supposed to be that way,” Hannah said.

During that week, Hannah and Marshall set up a table and invite onlookers to sit and take part in artistic activities, with the aim of sparking a dialogue about the reasoning behind the red dresses. This school year, they also provided participants with a list of 150 suggested acts of reconciliation.

The Faceless Dolls Project, developed by the Native Women’s Association of Canada, was created to demonstrate how devalued missing and murdered Indigenous women are by society.

Over a six-month period between 2016-2017, students and staff across Fanshawe’s four campuses crafted 600 unique faceless felt dolls to represent the women’s individual identities outside of statistics and numbers. The completed dolls are now exhibited throughout Fanshawe’s campuses.

The upcoming Moose Hide Campaign, created by B.C. father and daughter Paul and Raven Lacerte, features a one-day fast on Feb. 7 for both Indigenous and non-Indigenous men. Marshall said that event provides a space for the men to come together and discuss the issue of gender-based violence. This is Fanshawe’s second year taking part.

“Conversations about violence against women sometimes fall to women,” Marshall said. “It was a shift to hear men talking about these issues [and] how men can partner with women and use the social capital that they have to change the conversations and be part of the cultural change that we want to see on campus, which is a safer campus for everyone.”

Marshall added that any men interested in participating in Moose Hide could contact her at lkmarshall@nullFanshaweC.ca, or Hannah at channah@nullfanshawec.ca, and that she encourages all students to learn more about the issue of gender- based violence against Indigenous women.

“There’s a lot of power in calling different people across campus to have these conversations and to acknowledge that we all have a role to play in ending this type of violence, as well as working towards reconciliation,” Marshall said.
Chris Hannah Fanshawe College First Nations Indigenous Leah Marshall

Get to know your new city councillors

The Marrow Thieves inspires community activities for One Book One London