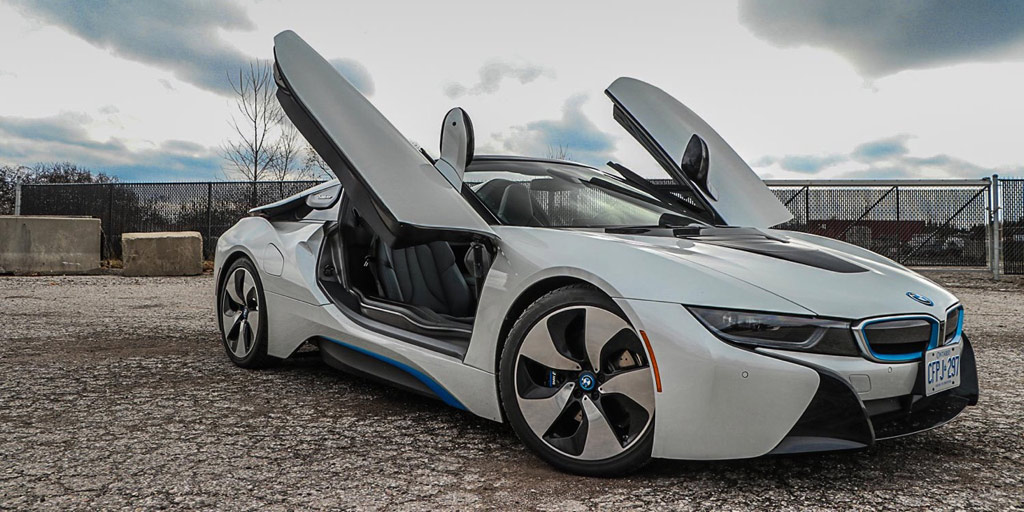 There were a lot of cars tested out in 2018, but there were five that made the list as the best cars of the year.

Hope everyone had a wonderful 2018, and that the ‘new year’ will bring even more joy.

Now, time for some reflection. In 2018, I drove 63 new cars, and the following is a list of the five best - hint, they’re all built for fun!

5. McLaren 570S Spider: If there was an award for the ‘best handling car’ I tested in 2018, the McLaren 570S Spider would take the top prize. While I got to drive a few vehicles over the year that handled well, nothing came close to the sheer grip and poise the 570S Spider showed in the bends.

Not only does it have tons of grip, but the steering never overloads during the corner, making it easier to go faster around big off-ramps.

To help it go fast, the 570S Spider (Spider, as in, convertible) is propelled by a twin-turbo 3.8 litres V8 engine, that produces 562 horsepower and 443 pounds per foot of torque. All that power is sent to just the rear wheels via a seven-speed dual-clutch gearbox. Use launch control, and it’ll sprint from 0 to 100 kilometres per hour in just 3.2 seconds, and top out at 328 kilometres per hour

Very impressive, but why is it in fifth place, and not higher? Well, first of all, it is very expensive – prices start at about $247,500 and go much higher from there. My tester was very nearly $320,000 plus tax. Ouch. And for that money, I expected the car to sound better, have a better infotainment system, and more features.

But, if what you’re after is the best handling car on sale today, and money is no object, than the McLaren 570S Spider will truly satisfy.

4. Mazda MX-5: For over two decades, if you’ve been shopping for a fun, reliable, two-seat convertible, that doesn’t bankrupt you, the answer has been the Mazda MX-5. For 2019, it is even better than before, because now it has more power than ever before.

For 2019, Mazda has given their 2.0 litres engine the full SkyActiv treatment, and as a result, this motor now produces 181 horsepower and 151 pounds per foot of torque. Power is routed to just the rear wheels via either a six-speed manual or a six-speed automatic gearbox.

Regardless of the gearbox you choose, the MX-5 is fun to drive – in fact, thanks to the amount of time you can stand on the throttle and still be at somewhat legal speeds, is a real joy. Despite the fun, I still averaged 7.8 litres per 100 kilometres in my test cycle (170 kilometres of highway driving + 130 kilometres of city driving), and that’s very good.

For 2019, Mazda has also given the MX-5 a telescoping steering wheel -that’s a first, as generation one and two (NA, NB) had fixed steering wheels, and the third (NC) and early fourth-gen (ND) had just a tilt feature)- along with a reversing camera.

While there are a few different trims available, and the option of a folding soft-top or the targa-style RF model, all MX-5 models have the same basic ingredients. With prices starting at just $32,900 – the 2019 MX-5 is great value for money.

Any complaints? Yes, I still am not a big fan of its styling –in particular, the nose with those squinting headlights– so it can be improved upon. I also don’t like the placement of the reversing camera -it sticks out of the rear bumper as if it had a dime sized stone chip- and while it sounds OK, I wish it had a sportier -as in, louder- exhaust.

Minor complaints, which I’d be happy to live with, if I had to live with one on a daily basis.

3. Acura NSX: Supercars are typically fragile things, that are often quite uncomfortable, and have an appetite for fuel as large as their price tags – the new Acura NSX is none of those things.

Acura, being the top-tier brand of Honda, means that the NSX is well built, and hence should last forever. Thanks to adjustable suspension, the ride can be very firm for race track use, or reasonably soft for everyday road use – this is one of the most comfortable sports cars I have ever driven. As for fuel consumption, since it is a hybrid, it is fairly economical (I averaged 13.1 litres per100 kilometres).

But, a car like this is not about saving fuel, or even ride comfort – it is meant to go fast, and that it does. Thanks to two electric motors in each of the front wheels, plus a smaller electric motor that lives between the gearbox and its 3.5 litres twin-turbo V6 – the NSX is fast. We’re talking about a car that’ll sprint from 0 to 100 kilometres per hour in about 2.7 seconds, and top out at 307 kilometre per hour. It can do that because its powertrain gives a combined output of 573 horsepower and 476 pounds per foot of torque – so its performance numbers are better than what you’d expect from such power figures.

Many powerful cars are hard to launch quickly and cleanly, but thanks to a simple-to-use launch control system, and all-wheel drive, the NSX is a joy off the line.

Any complaints? Well, I wish the styling gave a nod to the original NSX – the two generations look nothing alike. I also wish it’s infotainment system didn’t come out of a Honda Civic. While it sounds decent, it is not among the best sounding cars I’ve ever driven. It’s electric range is very tiny, because it is a conventional hybrid, and not a plug-in hybrid. And then there is the price tag, at $189,900 – the NSX is not a bargain compared to the competition, and I feel it needed to be in order to sell in larger numbers.

But, if you’re looking for a supercar that you can use pretty much every day, the NSX is very probably your best bet.

So, what’s changed? Well, you now get to choose between a coupe and a convertible (Roadster), which is good to have.

The styling of the car received some minor tweaks, but the big story is the open-top Roadster model, which makes the i8 even more eye-catching than ever before – not an easy feat for a car that already dropped jaws wherever it went. That top takes about 15 seconds to go either up or down, and can be operated at speeds up to 50 kilometres per hour– that’s impressive.

The i8 received some powertrain updates too, with its battery pack now having a capacity of 11.6 kilowatt hours – compared to just 7.1 kilowatt hours for the older model. That means, it can now go on pure electricity further -range is up from 30 to 50 kilometres- and those two electric motors in the front now produce an extra 12 horsepower, for a total of 369 horsepower. Torque is up also, now maxing out at 420 pounds per foot– which would come in handy, because the Roadster, at 1665 kilograms, is about 60 kilograms heavier than the coupe.

Numbers are one thing, but what I’ve always really liked about the i8 was the way it drove, and it still excels in that department. The carbon- fibre chassis is rigid, the suspension geometry is excellent, and even the electric power steering system offers up plenty of feel. As a result, in full on ‘Sport’ mode, the i8 is a real joy to drive, especially on twisty roads. The i8 might be a plug-in hybrid (a big reason it scores higher in my books than the Acura NSX), and it can play the part of being a green commuter quite well; but when you just want to have fun, it delivers more than you expect - and now with added open air joy!

Any complaints? Well, I wish its electric only range was higher still, I think plug-in hybrids should at least allow for a 100 kilometres of pure EV driving – and while the EV range is suppose to be 50 kilometres, I managed 37 kilometres at best during my test. I also wish it had been given more of a power boost, because its chassis can handle so much more. And finally, its instrumentation might have looked good when the i8 was launched back in 2015, but is showing its age now – LCD dashboards have come a long way since than.

However, I’d gladly overlook its few quirks and irks to spend more time with the i8 Roadster – if only I had a spare $169,900 (plus dealer fees and taxes) to bring one home.

1. David Brown Automotive Speedback GT: This is by far the most expensive car on the entire list – by a big margin – but trust me, the price tag was not a motivator or a deterrent for as to why this car is on top of my list.

Because, when you look at how a car’s beauty makes you feel, how its interior invites you, and how the drive totally satisfies, it just leaves you with a feeling of pure joy, and that is exactly how I felt about the Speedback GT by David Brown Automotive.

Last year, I placed the Speedback GT in fourth place, so what changed in a year that it now is placed number one? Well, last year I struggled with its price tag, and felt that it shouldn’t be placed higher because of that. When I got to drive a second Speedback GT again -back in April of 2018- I quickly realized that this car is pure perfection, and not only the best car I drove in 2018, it probably is the best car I have ever driven!

I love the way the chassis and steering feels, the ride is comfortable for touring but is also firm enough for when you’re putting your foot down.

The Speedback GT is not built for outright speed, but thanks to its supercharged 5.0 litres V8 engine -which produces 510 horsepower and 461 pounds per foot of torquethis vehicle is sufficiently quick; able to sprint from 0 to 100 kilometres per hour in 4.6 seconds and topping out at 250 kilometres per hour. Want to go faster? David Brown Automotive now offers a Silverstone Edition of the Speedback GT, which has 601 horsepower – that’ll satisfy most speed demons.

I know what you’re itching at, the price tag – how much is it? Well, it has a base price of $900,000. Add options, delivery charges, and taxes, and this car comes in at over $1-million on the road.

Is it worth it? For most people, probably not, but the time I had driving this car exceeded all other experiences, and hence it takes the number one spot.

Any complaints? Yes, I don’t own one.

There you have it, another year wrapped up. What will 2019 hold, and which car will top the list next year? You -along with me- will just have to wait and see.
Click on the thumbnails below to view a larger version of each image. 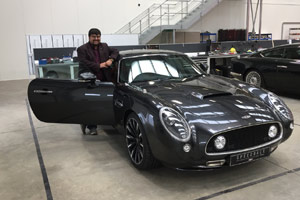