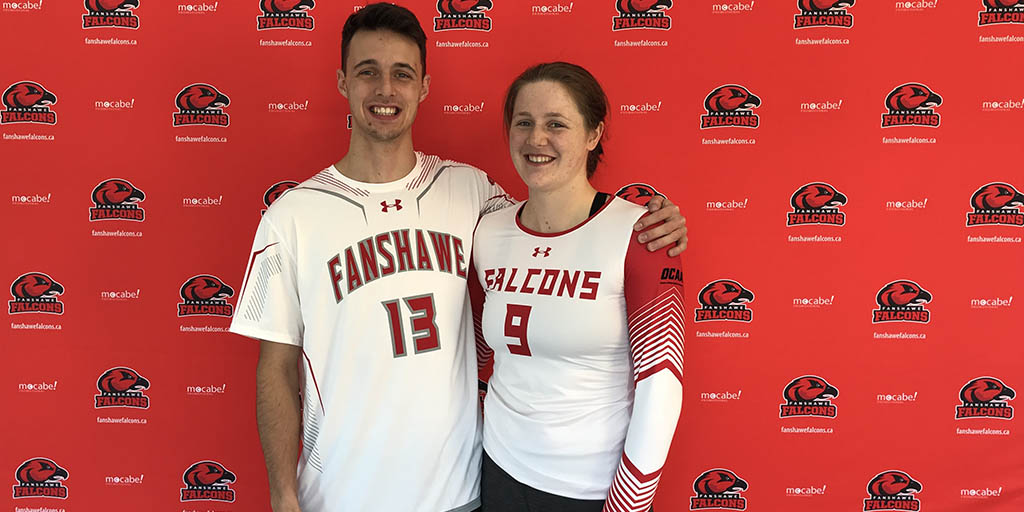 
The Falcons men’s and women’s volleyball teams are having one of their best regular seasons yet, and the secret to success may be all in the family.

Sibling duo Zach and Janelle Albert grew up playing volleyball. Now, as Fanshawe students, they are lending their experienced talents to their respective teams.

Janelle, 19, is currently leading the fifth nationally-ranked women’s squad in points per set (4.5), digs per set (2.7) and the Ontario Colleges Athletic Association (OCAA) in service aces per set (1.1). This has been the best regular season in Falcon women’s volleyball history with a 13-0 record so far.

Zach, 21, is also leading his team in points per set (3.9) on the firstranked Canadian Collegiate Athletic Association (CCAA) men’s volleyball team, who are also 13-0 in OCAA league play and the reigning CCAA national silver medalists.

While both teams worked collectively to achieve these victories, the Albert siblings’ unique dynamic may be the proverbial ace up the sleeve. Zach began playing the sport when he was just 10 years old, followed by Janelle two years later. Their father, a volleyball coach, gave them pointers, but the siblings also enjoyed cheering each other on.

“Anytime we’d play, we’d be correcting each other right after the game,” Janelle said.

“We’d watch a video of each other, and always try to help each other,” Zach added. “We were constantly talking to each other about each other’s game.”

Originally hailing from Brampton, Ont., the siblings said that they always wanted to improve their skills and play to win. Although they both maintain a competitive edge, they also taught each other the importance of giving and taking constructive criticism.

“Building a strong team dynamic is always being honest with each other and doing your best to help each other out. It’s about always staying positive around everyone else and trying to make sure that we do everything as a team,” said Zach.

The siblings said that this philosophy applies to life outside the court, as well. Both Zach and Janelle are enrolled in Fanshawe’s business marketing program. Although they are in different years, they said they remind each other that assignments are due and bounce ideas off each other.

Despite playing the same position in volleyball (left side), and attending the same program, Zach and Albert insist they do have their differences.

“Janelle works out a lot more than I do, and there’s a lot more commitment to a schedule,” Zach said. “Whereas I’ll sleep in and do nothing for a couple hours where she’ll be working on stuff or doing something.”

Janelle added that Zach is more business-oriented, referring to his past gig running a Student Works Painting company and completing an entrepreneurship certificate.

Zach and Janelle said that athletically, they share the same goal: winning provincials and going on to nationals.

“I don’t want to lose any season games so we have a clean record. If we go to nationals, I don’t want to get killed,” Janelle said. “I want a close game.”

Zach agreed, saying that the outlook is positive for his team.

“The ultimate goal is winning nationals,” he said. “But first obviously we have to win or come top two in provincials. We have a lot of returning guys this year, and we do have a lot of new players who bring a lot of value to the team. So we do have a big chance.”