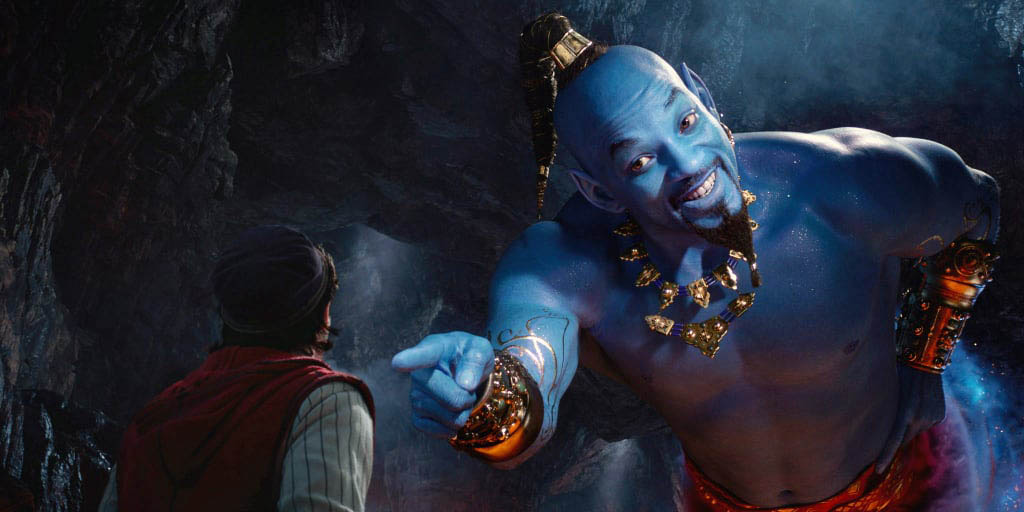 CREDIT: WALT DISNEY STUDIOS MOTION PICTURES
The big blue Genie is back, this time in 3D in the live-action version of the classic cartoon, Aladdin.

Since the release of the live-action Alice in Wonderland in 2010, Disney has been bringing their classic films back to life. The most recent release is a remake of the film based on the tale from the folktale collection One Thousand and One Nights, Aladdin.

For those who might not have seen the classic animated version, the story is set in the desert kingdom of Agrabah where the hero of the tale, Aladdin (Mena Massoud) and his monkey pal Abu live. Aladdin is convinced by the Sultan’s advisor, Jafar (Marwan Kenzari), to enter the mystical cave of wonder to retrieve a magic lamp. Here he meets the magical being living in the lamp, Genie (Will Smith). Aladdin gets his help to woo Princess Jasmine (Naomi Scott) and eventually stop Jafar from taking over Agrabah.

Being a remake doesn’t mean everything plays out the same as the original film. The meeting between Aladdin and Jasmine occurs earlier than it did originally, and not only does it act as an introduction to Aladdin’s background, but also helps develop the romance between Jasmine and Aladdin earlier in the film, letting it blossom at a favourable pace. It gives a chance to introduce an original new character for this production, Dalia (Nasim Pedrad), Jasmine’s handmaid, who plays a role like a comedic wing-woman supporting Jasmine’s relationship between her and Aladdin.

Will Smith’s role as Genie not only emulates what we saw in the original cartoon, but he added in his own touch to the character by giving it a hip-hop flare, most noticeable with his dance moves. His comedic improve-like lines when he’s trying to woo his own romantic interest, and bantering with himself for saying ‘stupid’ things, shows a vulnerable and ‘awkward-boy-witha- crush’ side to the great cosmic being that we didn’t see in the original.

Some characters have more depth to them, such as Jasmine being more informed and involved in the politics of Agrabah, giving her a more active role in the film. Sadly, for Jafar they gave a flushed-out backstory that explain his motives for why he wants the lamp, but it made him lose his comedic charm, especially with his interactions with the parrot Iago (Alan Tudyk). Instead of the witty banter that we saw in the cartoon film, Iago’s role has been toned down to repeating other characters’ lines similar to, well, a parrot, and sometimes small witty remarks.

The well-loved musical pieces from the original have been brought back to life with some twists from the old. The song “Friend Like Me” from the classic gets a modern twist by introducing a hip-hop part and the other songs also have similar adjustments. These changes make it easier for both young and older people to enjoy the film equally.

Altogether, Aladdin uses its comedic dialogue, modern culture references and flushed out characters to make it enjoyable to new, young or old audiences across the world.
Disney Movie reviews Movies Will Smith

IGOR by Tyler, the Creator: Review

Not a term of endearment