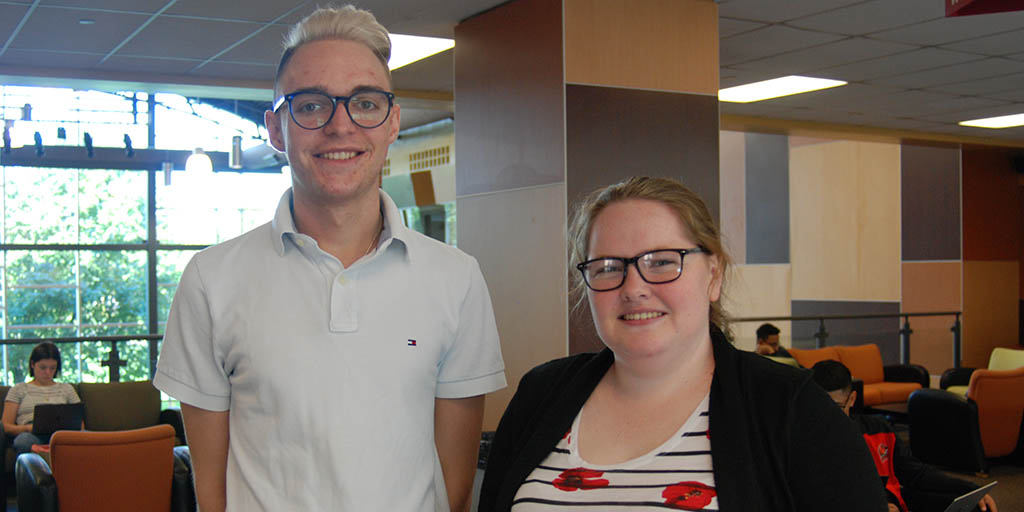 A club supporting LGBTQIA2+ (lesbian, gay, bisexual, trans, queer, intersex, asexual, Two-Spirit, plus all others) individuals is running earlier than usual and looking forward to another year.

Spectrum Fanshawe was ratified as of Sept. 19 for the 2019/2020 school year. The group supports LGBTQIA2+ individuals, which Spectrum Fanshawe president Fraser Brown also called “the alphabet community,” by creative a positive and safe community space at the College. Students, staff, alumni, and allies of the LGBTQIA2+ community, along with Londoners not associated with Fanshawe College, are encouraged to join.

Along with events like game nights, movie nights, and meetings with discussions and guests speakers, Spectrum Fanshawe offers a list of resources and referrals for students.

Fraser Brown, the president of Spectrum Fanshawe, said that the club made a difference for him during his first year at the College.

“It provided a whole other network of friends and really, we almost became family at times too,” he said. “So there’s still some of the people that I go to for support and advice.”

Brown added that the group is promoting different community organizations, including the London InterCommunity Health Centre and the Regional HIV/AIDS Connection.

Spectrum is also working with Sexual Violence Prevention Advisor Leah Marshall for different events, such as the Rainbow Mix and Mingle and the Sexual Awareness Fair that happened earlier in September, and with the College’s Positive Space group.

Spectrum advocates for more gender-neutral washrooms and positive space posters. With the positive space posters, faculty and staff will take them for their offices to indicate they are allies of the LGBTQIA2+ community. Brown said that the posters indicate who people in the LGBTQIA2+ community can confide in when they have issues in either their academic or personal lives.

Amber Cowan, Spectrum Fanshawe’s vice president, said that if someone is questioning their sexuality or doesn’t feel welcomed, Spectrum’s events and meetings provide a positive space too.

“It provides that space for them to just kind of breath and they’re free to be whoever they are or whoever they think they might be,” she said. “It just gives them a bit of room where they don’t have to feel like they have to pretend to be who they once were. They can just be true to who they really are.”

Brown said that the club is ahead of schedule so far, and is already looking into events the club can host in January 2020. He said they’re interested in hosting another Reclaiming Our Time conference. The conference, held the previous school year, featured guest speakers and a student panel discussing experiences within the LGBTQIA2+ community. For example, one student faced difficulties with trying to change their name to their preferred name for residence services near the end of the school year. Brown said he faced homophobic slurs in hallways and change rooms.

He also said that the conference talked about issues trans students face, such as feeling scared to use the washrooms they identify with and planning how much water they drink ahead of time in case they can’t get to a gender-neutral washroom. He applauded the Fanshawe Student Union (FSU) for including signage in the lower level bathrooms, which indicate where people can go based on their gender identity.

“Seeing that kind of signage around the campus would be amazing to see, and something we’re going to continue to advocate for,” Brown said.

Cowan was unable to attend the conference because she had class, but still spoke about the importance of advocacy.

“It’s so important for us who are in a position of privilege of being heteronormative, as I am, to just be able to listen and really come to understand some of the struggles that things like name and pronouns are so, so important to some of these people and it’s important for us to be able do everything we can so that they have the access they should to those things.”

Spectrum Fanshawe will be part of Clubs Day, which will be on Oct. 1 on main campus and Oct. 3 at the Downtown Campus, as scheduled by the FSU on Facebook. The first Spectrum Fanshawe meeting of the year, a games night, is expected to be on Oct. 4 from 6 p.m. to 8 p.m.

Visit facebook.com/spectrumfanshawec for more information and request to join the Spectrum Fanshawe 2019/2020 Facebook group to find out when and where meetings are happening throughout the year. Brown said the Facebook group is private to respect the privacy of students who might not be out.
Clubs LGBTQIA2+ Spectrum

Impact of deepfakes on federal election