Masters of the Universe (1987)
The Yankees versus the Red Sox. The Canadiens versus the Maple Leafs. The United States versus Iraq. Nicole Richie versus Steven Seagal.

These are all great rivalries, but there is one feud with more drama, more emotion and more laser shooting ram skulls than all of them put together. 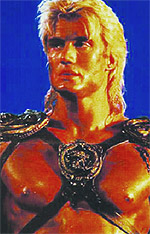 I am of course referring to the classic battle between He-Man and Skeletor.

Masters of The Universe explores the continuing war between the forces of good, led by He-Man, and bad, led by Skeletor. For anyone not familiar with the story behind the Masters of the Universe saga, as portrayed in comic books, cartoon series and action figures, here is just a brief re-cap.

The story takes place in the world of Eternia, where Prince Adam, a member of the Royal Family discovers he has the power — the power of Grayskull that is. By lifting up his sword, Adam is able to turn into He-Man, the most powerful man in the universe. This power comes in awfully handy, as He-Man must continually thwart the plots of Skeletor, who covets Castle Graysull and all the powers held within.

As the film begins, Skeletor and his dastardly cohorts have taken over Castle Grayskull and kidnapped the Sorceress, guardian of Grayskull. He-Man and his friends Man-At-Arms, Teela and Gwildor, a three-foot tall locksmith, venture over the Grayskull to try to put an end to these shenanigans. Things do not go as planned for the good guys, and before you know it, He-Man and his chums are on earth hanging out with Courtney Cox. Yes, that Courtney Cox.

Both Dolph Lundgren as He-Man, and Frank Langella as Skeletor bring their characters to life in a way that I was never able to do, no matter how many electrodes I hooked up to their little action figure man nipples.

Yet where was Dolph Lundgren on Oscar night in 1988? Sitting at home, eating a Swanson Hungry Man Dinner, watching Michael Douglas steal his prize! Well, the jokes on you Douglas, because I'm sure whenever you make love to Catherine Zeta-Jones, she's thinking of Dolph Lundgren and his mighty sword.

Some might see Masters of The Universe as a simple mindless popcorn flick. Well, those people are jerks and if I ever see them I'm going to punch them right in the back of their head when they are not looking. I'm sorry, I just get a little emotional sometimes when I talk about this movie.

There is a lot of depth to this film, and many papers have been published theorizing on the themes this picture explores.

Some say Castle Grayskull represents all in one's life that they hold dear. Those same scholars say that Skeletor represents the sub-conscious fear that someone will try to take away what we hold most dear. For some Grayskull might be their wife/girlfriend, while Skeletor might represent the handsome young milkman who has been delivering far too much milk to your household.

Of course this isn't to be taken literally, but if your milkman has been known to consort with individuals named Evil-Lyn and The Beast Man, and makes off handed comments like “well, I'd better be heading back to Snake Mountain”, you have a right to suspect your lady of infidelity.

It's a big universe out there folks. One that is quite difficult to master. This landmark cinematic experience not only provides us with thrills and chills, it also teaches us an important lesson. Whether you are a 6 foot 5 inch tall warrior or a three-foot tall locksmith, you cannot master the universe. You can simply adjust best to whatever life throws you. That my friends is the true power of Grayskull, the true power of the universe, and the true power of life.