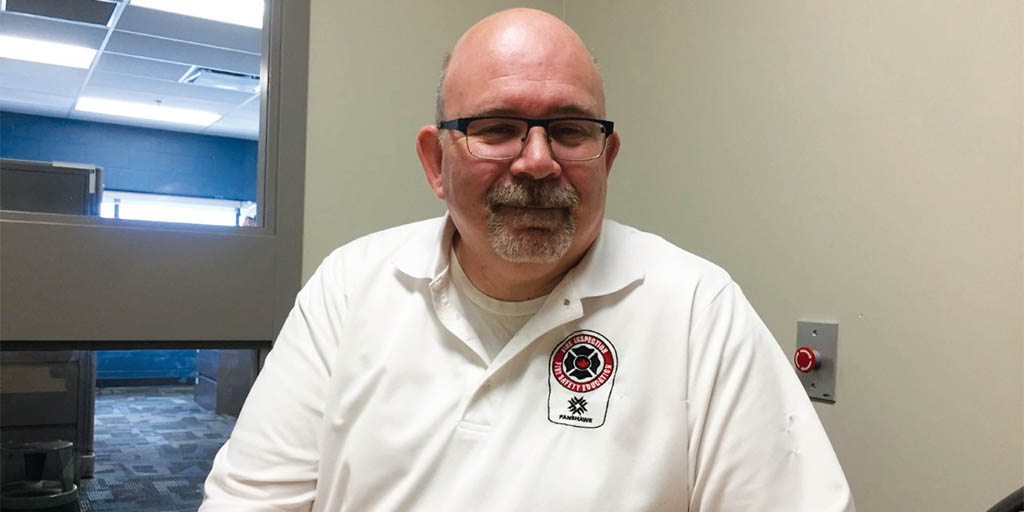 Credit: JASON MACDONALD
Frank Donati, coordinator for the fire inspection and fire safety education program, said students need to be more aware of what fire risks they’re exposed to when living on their own for the first time.

As part of this year’s Fire Prevention Week (Oct. 6 to 12), the School of Public Safety will be running an information campaign through the London Campus (Oxford Street). The campaign is hoping to show students that moving out comes with a set of responsibilities and rights that they need to know. Public safety officials have noted that students in particular are vulnerable to fire risks that can, in most cases be avoided. Students and local firefighters will be setting up booths to hand out flyers and chat with students.

The campaign can be trace its origins back to 1911 when the Fire Marshals Association of North America, the oldest member organization of the National Fire Protection Association (NFPA), organized the first Fire Prevention Day. The event was originally organized to commemorate the Great Chicago Fire of 1871. The devastating blaze took approximately 300 lives and burnt over 17, 500 buildings throughout the course of three days.

In a similar fire the day before, upwards of 500 died in Wisconsin in the Peshtigo forest fire, which burned 1.2 million acres of land and is now known as the deadliest fire in American history. It’s fires like these that fuel the nightmares of fire safety advocates, who say an event like this got so out of hand because of the scarcity of warning systems. Since then the Prevention Week has grown internationally.

It can be easy to assume that with all our modern technology and way of living, fire risks should be extremely low. However, according to Frank Donati, coordinator of the fire inspection and fire safety education program at Fanshawe College, there is still lots of work to be done to get people to take precautions.

“Something like 30 to 40 per cent of all households have working smoke alarms on the day we inspect,” Donati said.

This is despite fire alarms being lawfully required to be present and functional in any home since 1971. Donati went further to say that this negligence is usually the cause of fires.

“We’ve found that almost every house fire across Ontario has been in a house where there were no smoke alarms or it just wasn’t working,” he said.

While that statistic accounts for the total population, students can fall victim to negligent landlords or just not knowing what they need to do to protect themselves. Fire safety, particularly among, students who have recently moved out, is a big concern for Donati. He said students often don’t realize what risks they’re exposed to.

“Students who have just moved out and it’s their first time living on their own and they don’t have a lot of money, I can tell you right now that the phone chargers that get bought at dollar stores are not Apple-approved and can be a fire hazard.”

Donati said he has found that having other students aid in the outreach can have a greater impact and lead to greater learning opportunities.

“Other colleges have been trying it out. Students in the program are expected each year to take part in the event.”

The students in the fire inspection and fire safety education program are tasked with creating the most effective outreach program they can and have been studying the effectiveness of other campaigns. Part of this will be done with the London Fire Department which will have a booth set up in the Fanshawe Student Union Building (SUB).

Students looking to find out more can contact the Emergency Management Office at 519-452-4400 to get a better idea of what kinds of things they should be looking for.

1
Is football safe?
2
Where do we go from here?
3
How to celebrate the New Year, safely
4
Safety Tips for Celebrating the Holiday Season