The reality of mental health: an uncensored glimpse into our support services 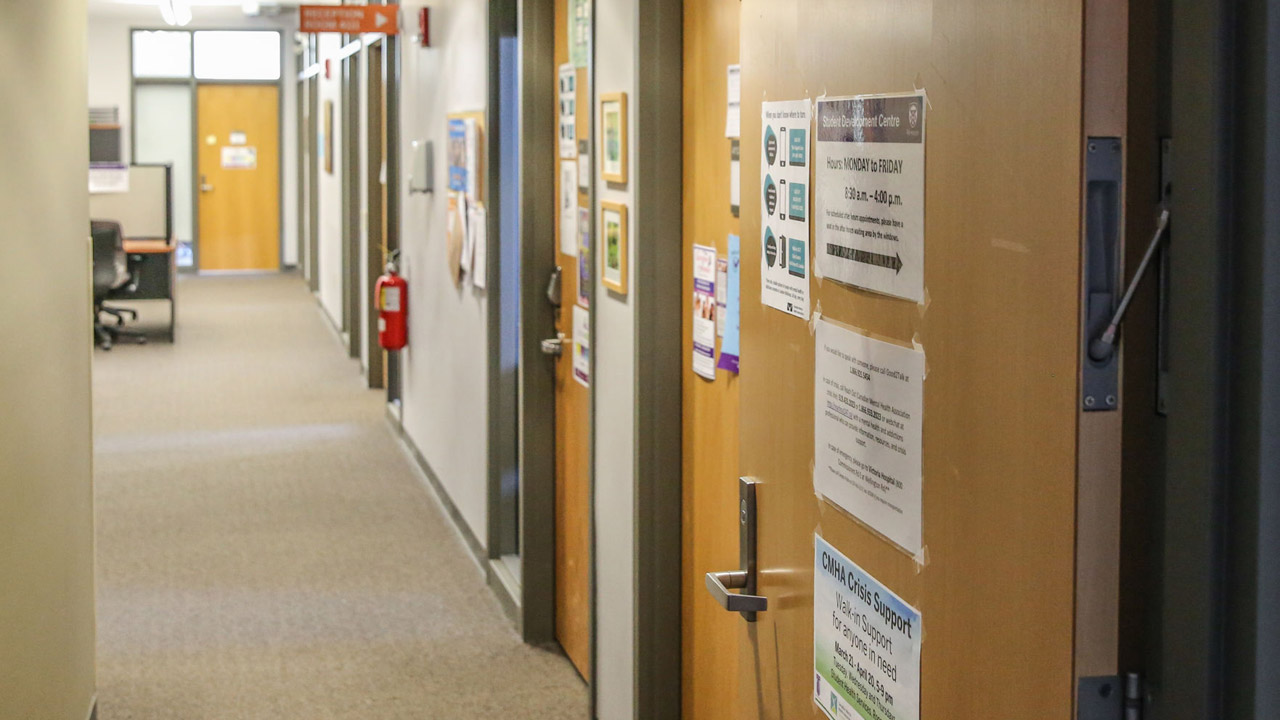 Credit: MICHAEL CONLEY (GAZETTE)
Opinion: There is still much work for Western to do at improving its mental health support services.

Between the Bell Let’s Talk campaign and Suicide Prevention Month, the discourse about mental health and illnesses only surfaces twice a year.

While resources such as suicide hotlines are shared with intentions of informing and advocating for the silent suffering that follows acute mental illnesses, we fail to acknowledge the raw experiences of those who live with mental health complications every day.

It’s a common misconception that a crisis is a singular event and that a phone number can solve it all.

“People think it’s just about saying ‘you can reach out to me.’ I appreciate it and it’s helpful to a degree but it doesn’t solve the issue,” said Vin Venkatesh, a first-year Ivey student. “[People] aren’t licensed professionals. It’s the difference between helping someone put ice on a sprained ankle versus treating a broken leg. The misconception is that if we all talk about it, it wouldn’t be an issue, but we can talk it about it and it’ll go nowhere. We need structures in place.” Structures that, for many, don’t work.

First-year psychology student Marissa Lyon at King’s University College was diagnosed with Type 1 bipolar disorder following a psychotic episode when she was 18. “I had a mental breakdown and I had to be hospitalized so I’ve been in the healthcare system, and I can’t explain how shitty it is,” said Lyon.

She was placed in adult care at Victoria Hospital in London, initially staying in the psych ward of the ER. She was only supposed to spend three days there, but with the surplus of patients and lack of beds, it turned into a week.

“They put me in a room that was literally just bricks around me. They had a bed with a bunch of straps on it, a chair, a pillow and a blanket. At one point they locked me in and I just lost it. No one would listen to me.”

Her interactions were limited to a daily check-in with a psychologist, nurses, security guards and the people in surrounding rooms.

“I remember our only way to communicate with other people besides faculty was through hand signals. So I’d communicate with and ask if [a guy in the room across from me] was okay through our windows,” recalled Lyon. “I remember he got moved upstairs one day and I had another guy in front of me who in one situation just got naked. He’d have severe breakdowns … I was terrified.”

She recalls thinking it simply wasn’t right to put an 18-year-old beside a 50-year-old. It opened her eyes to a new side of the system she didn’t know existed.

After the week, Lyon was moved upstairs. The first time she saw light and the outside brought her to tears.

“They weren’t there to help. They were there to get me medicated and get me out.”

Following the ordeal, Lyon was able to find stable help with the First Episode Mood and Anxiety Program, but the process to get there wasn’t easy and she’s not the only one.

“At LHSC our goal is to provide safe, quality care. Due to privacy restrictions, we cannot speak to details regarding individual patients,” the London Health Sciences Centre wrote in an emailed statement. “However, we do have specific facilities for patients in crisis. These rooms are designed to have limited furniture and decoration so that risk of injuries is minimized. The rooms are monitored 24/7, including additional security support for the area.”

“In addition, our Patient Relations Department takes patient feedback very seriously, and we recommend that patients contact us directly to discuss their experiences.”

Venkatesh faced her own obstacles getting help within the university.

In a moment of crisis, she accessed Western’s university health and wellness website and after clicking a big green button that said “I need help now,” was instructed to visit Student Health Services.

“So I show up there and I tell them I’m experiencing a personal crisis and I feel like I’m at risk of harming myself,” recalled Venkatesh. “They told me ‘can you come back tomorrow morning, we’re backed up.’ I said I guess I could, but where can I go now and they directed me to [Psychological Services]. So I go to Psych Services and they tell me I need to first book an appointment with Student Health Services.”

In her eyes, it was as if the university believed you could simply postpone a personal crisis to convenient working hours. As she publicly expressed her frustration over social media, she found campus police at her doorstep two days later

“There was no in-between. ‘Please schedule your personal crisis at 9 a.m. tomorrow’ or if we learn that you’re at risk of hurting yourself we will call the cops. Where was the support between [going to Student Health Services] and my appointment?” she said. Hirra Majid, a fourth-year BMOS and political sciences student at Brescia University College expressed similar sentiments.

“I was told to go to Student Health for the same day or next day appointments when you’re struggling. I went in to book an appointment. I was okay with doing it the next day. They told me they couldn’t do that and I should come in tomorrow before 10 a.m. to get a spot,” explained Majid. “I had a class before then, and she told me I had to decide ‘what was more important.’ I was already stressed.”

She couldn’t understand why she wasn’t able to just book an appointment that afternoon.

After consultations with 500 students, staff and senior leaders, as well as a campus-wide survey with over 1500 responses in three years, Western put forward a student mental health and wellness strategic plan in the effort to improving campus mental health services. In the 2018-19 school year, Western’s mental health team introduced a new responsive care model designed to provide students with individualized care plans and, in the process, discovered a pain point with a surplus of student no-shows at booked appointments

“Obviously, that takes away the opportunity for students that really need that care,” commented Jennie Massey, Western’s associate vice-president of student experience.

Western has, since the inception of the responsive care model, also upped the availability of weekly crisis care appointments. Western says students will be received as quickly as possible, typically the same day in a period of crisis. Western also extended counselling hours starting this September, to now close at 7 p.m. to accommodate more students.

While most appointments are conducted through phone calls during the pandemic, Western has also introduced video counselling. The university also provides students a safe location in Student Health Services to complete counselling if they can’t take calls at home.

“Western has been working hard to increase the quality and the support of our mental health services and it’s important to me that students recognize that these changes have now been implemented,” said Massey. “There’s, of course, more work to be done but I really want students to reach out for help if they need it ... we really need to foster a culture and climate of student well being.”

Two years ago only one person was working in the wellness education centre at Western. Today, while that number has increased and proactive steps are being taken to right previous wrongs, there is still much work to be done.

Often when we talk about mental health, we allude to what we should be doing, where we should be going for help and who we should be contacting. Rarely do we critically evaluate the resources at hand and speak to the lack of support that’s truly available.

“It goes beyond sharing a national hotline, it’s important to bring to light to what suicide prevention is. It’s not just preventing someone from harming themselves when they’re in a crisis but it’s all the things leading up to that in the first place,” said Venkatesh. “I wish I knew the supports I needed weren’t available.”

“What the university is doing right now isn’t enough, it’s not efficient,” added Majid. “They need to provide safe spaces to access help.”

Past institutional reform, Lyon also speaks to the information is readily shared by people and her peers

There’s no doubt that we are far away from having a secure support system for people suffering from mental illnesses. By failing to speak about the reality of it, it’s hard to imagine things changing anytime soon.

“It’s tough having conversations because people are going to tell you the same thing that people tell you on Bell Let’s Talk Day or during [Suicide Prevention] month,” explained Venkatesh. “You have to explain that you’re in an on-going illness ... It’s not just a matter of calling a helpline when you’re in a crisis but it’s receiving ongoing care from your institution that simply does not exist right now.”

A complete list of mental health resources at Western can be found at uwo.ca/health/ mental_wellbeing/resources.html. First published Sept. 30, 2020
Editorial opinions or comments expressed in this online edition of Interrobang newspaper reflect the views of the writer and are not those of the Interrobang or the Fanshawe Student Union. The Interrobang is published weekly by the Fanshawe Student Union at 1001 Fanshawe College Blvd., P.O. Box 7005, London, Ontario, N5Y 5R6 and distributed through the Fanshawe College community. Letters to the editor are welcome. All letters are subject to editing and should be emailed. All letters must be accompanied by contact information. Letters can also be submitted online by clicking here.
Anxiety Depression Mental Health Suicide Western University

1
How physical activity can improve your mental health
2
Local resources available for Indigenous peoples
3
Coping with mental health on the job hunt
4
Professional athletes are humans, too
5
Ten Steps Behind: The effect of student loan debt on mental health

The onset of the COVID-19 second wave: why numbers are rising and how we're fighting the surge