Dirty Sanchez — The Movie
This past weekend, I got to see a movie that would make the boys in Jackass cringe. MTV Europe has this little TV show that is similar to Jackass in that they both feature a cast of characters whose mission is to outdo each other in the outrageous department. While Jackass raised the bar higher than I thought they could, the boys in the Dirty Sanchez crew, known as “Team Sanchez” across the pond in North America, put them to absolute shame.

There's not much that I can actually put into words about the movie except that it is split up into parts that reflect the seven deadly sins. All the stunts and locations try to fit into each theme. Each deadly sin just gets worse and worse and there were some parts that, although I'm a gore hound, I just couldn't watch for too long. 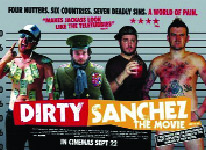 Like Jackass, the stars of the film are the characters willing to do the ridiculous stunts, but instead of Johnny Knoxville and Steve-O, the euro-version casts three Welshmen Matthew Pritchard, Lee Dainton, Michael “Pancho” Locke and a guy from Plymouth, Dan “Joycey” Joyce.

For example, Pancho goes to Bancock to get liposuction from a shady doctor — WITHOUT any anesthetic. If you think that's bad (and watching it does make you cringe), you have to see when a little while later, another one of the crew members, Dan Joyce, actually consumes the extracted fat. The many attempts are disturbing yet you just can't look away sometimes.

Pritchard also strips down for the camera in a stunt, which he believes is attempting to beat the world record for number of paintballs shot at a naked body (102), but the record doesn't actually exist (the boys made it up but don't actually tell him until later on in the show), and last but not least, Pritchard gets the little finger on his right hand cut off in Japan with a cigar clipper.

If any of this intrigues you or if you just love watching Jackass or shows of that nature on YouTube, then by all means, get your hands on this movie, the TV shows or DVDs. Ebay should be able to help you out, but beware about region two encoding (UK and European DVD encoding). To watch in North America, you need region one or region free DVDs. How's that for a nice tip.

I'd write a little more but I don't want to give too much away. These guys are crazy, vulgar and I would LOVE to see a Dirty Sanchez vs. Jackass movie made. That would be so insane that I think one of the respected cast members would probably die just to show up the other show.