Nshwaasnangong Centre opens its doors for Indigenous children and families 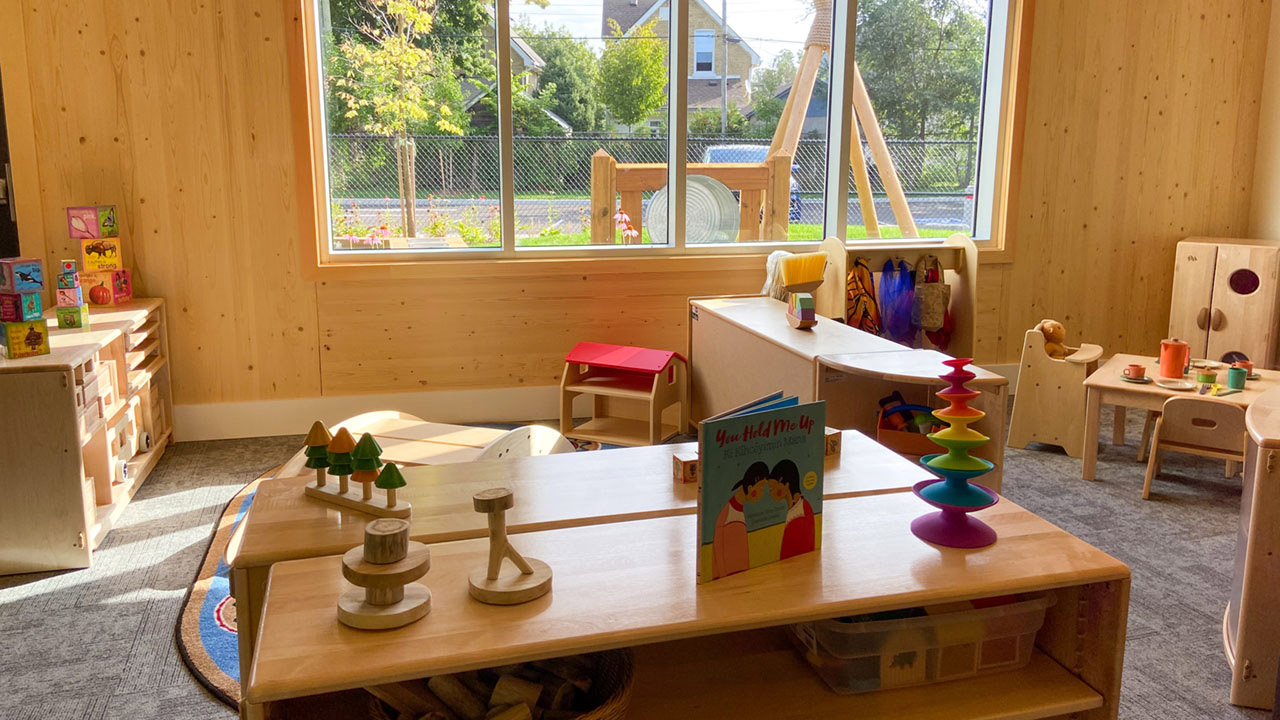 In an opening event filled with emotion, gratitude, drumming, and prayers, the Nshwaasnangong Child Care and Family Centre has opened its doors for First Nation, Métis, and Inuit Londoners.

Located at 449 Hill Street and operated through the Southwestern Ontario Aboriginal Health Access Centre (SOAHAC), Nshwaasnangong will be able to offer 88 infants, toddlers, and preschool children by mid-October a safe space through EarlyON programming to focus on culturally relevant education rooted in language and spirit.

During the soft-opening event, SOAHAC Director Jan Martin shared the meaning and focus of the new centre.

“The name Nshwaasnangong means ‘place of the eighth star,’” said Martin. “The name was gifted to our centre in an Anishinaabemowin naming ceremony and refers to the original eighth star in the Big Dipper that fell to the earth and became the Anishinaabe people. The name confers a great responsibility for caring and sharing the gifts of the sky world including culture, teachings, and language, for children and families who will attend the centre.”

In keeping with a focus of an Indigenous world-view, the centre was designed by Indigenous firm Two Row Architect Incorporated to replicate the shape of a turtle in connection with all of the people living on Turtle Island.

The centre features a tiered, curved roof that is lower in spaces for children to reflect protection, and ring-shaped windows close to the ceiling for sunbeams to shine through. While designing the centre, everything created has been intentional to aid Indigenous children in understanding and keeping with an Indigenous perspective through their growth and development.

A lush yard also surrounds the building, rich with grass and opportunity for children to gain hands-on knowledge of gardening and agriculture.

“It takes a large circle to raise and support our little ones, and our youth,” said Martin. “Together, our community envisions a creation of a beautiful, bright, and joyful place to honour and express our diverse identities as Indigenous people. We saw a place to rekindle our language, honour the teachings of our ancestors, and live in a balance with Mother Earth.”

Minister of Education Stephen Lecce expressed pride in the historic London opening for the centre as the project is part of the government’s ongoing commitment to Truth and Reconciliation for Indigenous people in addition to being an investment for early childhood education.

“The launch of the Nshwaasnangong Child Care and Family Centre will provide quality and free programs for London families, as well as affordable licensed child care, that proudly reflect and celebrate Indigenous cultures,” said Lecce.

Lecce commemorated the project, highlighting the importance the impact of the centre will have for Indigenous peoples.

“You, the taxpayers, invested over $5.8 million in capital funding towards the completion of this incredible project, in addition to the ongoing operating funding, to provide families and children with the high-quality opportunities that they deserve with respect to child care,” Lecce added.

For the first-of-its-kind Indigenous centre, a successful 60 per cent capacity has already been reached. Indigenous families who are interested are encouraged to apply through nshwaasnangong.ca/waitlist.
First Nations Indigenous London News Nshwaasnangong Child Care and Family Centre