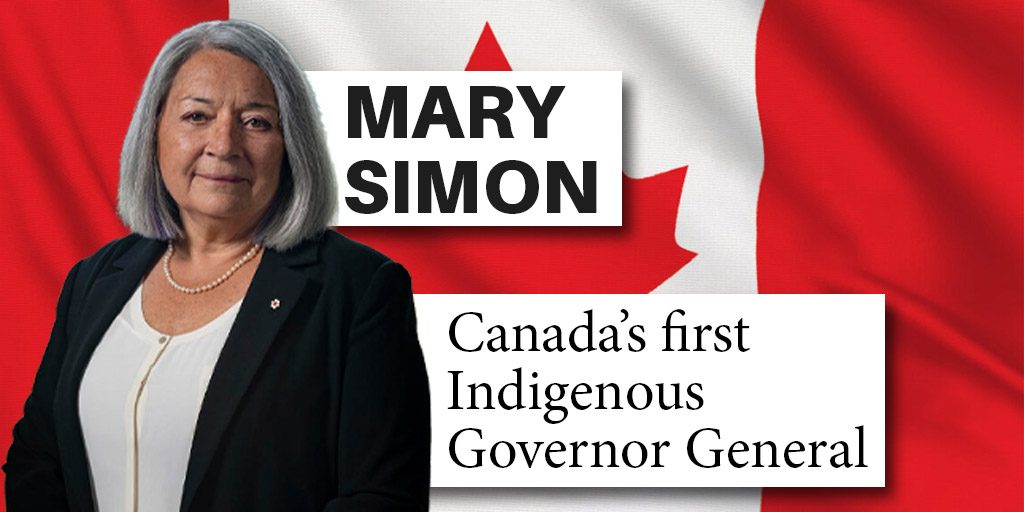 On July 26, 2021, Mary Simon was appointed Canada’s 30th Governor General. This was a huge victory for the Indigenous community as Simon is the first Indigenous woman and Indigenous person to ever be appointed to the position in Canada. Simon was formerly a broadcaster, civil servant and diplomat.

Simon has gained attention nationally and internationally for her work as an advocate for Indigenous issues and Inuit rights and culture. Earlier this summer, when Simon was appointed, a huge debate sparked regrading the fact that Simon does not speak French fluently. She is, however, fluent in both English and Inuktitut. Language is a huge part of who we are as humans and for the Indigenous community, words hold so much meaning and knowledge, whether they be conveyed through songs, stories, or dances. A lot of this language has been taught and passed down from generation to generation.

Simon’s language abilities have sparked a debate on which languages ‘count’ in Canada. In 1969, Pierre Trudeau’s government passed the Official Language Act, which was revamped in 1985. The legislation ensured that English and French were the official languages of Canada and ensured equality of the status and equal rights/privileges as to their use in all federal institutions.

Although Simon does not speak French, Inuktitut holds a great meaning not only to her but the Inuit community. Simon speaking her native language shows the power it holds.

Canada has always been at odds with its claims of multiculturalism and what is considered bilingual. Simon is a prime example of the importance of Indigenous languages.

Christine de Clercy, an associate professor in the political science department at Western University discussed the importance of Simon and her role as Canada’s first Indigenous Governor General.

“I think one of the ways that past Prime Ministers, whether they’re Conservative or Liberal, have been using the Office of the Governor General is to signal that politics ought to be accessible to more than just white men,” said de Clercy. “So I fully expect that First Nations, Inuit, and Métis women will find [Simon’s] assignment to be a wonderful example. And also, performance will demonstrate to them hopefully, that there are some doors opening for more diverse kinds of people, and particularly First Nations, Inuit and Métis people within federal politics. When it comes to Simon and the language barrier, if she wasn’t qualified for the position, the Prime Minister would not have appointed her.”

Another important thing about Simon being appointed Governor General is that it is a breakthrough, not only for Indigenous people in Canada, but also for women in the political field.

“It’s quite a welcome breakthrough that Mary Simon has been appointed to the role of Governor General,” said de Clercy. “I would say, if you look back at the long history of Governors General that Canada has had since 1867….first of all, if you notice, most of them are men. So the sort of informal eligibility and sort of suitability of women just as a group that she represents, is pretty recent. There have not been that many female Governors General. So that’s a recent innovation. And in fact, if we look across the role of the Governor General, the presence of more diverse representatives beyond just the standard old French and English, white male representatives is again, a relatively recent trend.”

When looking back in history, we can see that even as far back as 1986 that this role was given to a male and that it was uncommon for a woman to be in a position like this. And, up until recently, the political world overall has been driven by men.

“So I would put her appointment in this lineage that there has been a welcome shift in the sorts of people who are appointed to the highest office in the land,” said de Clercy. “The Governor General is the head of state and the most prestigious and symbolically important position we have. So it’s excellent, of course, that she was appointed in that there are many more kinds of people who are now apparently eligible to be populated in that into that role, but it is again, in the context of the time since Confederation, a relatively recent phenomenon.”

Overall, Simon’s appointment is a huge step forward, but one that comes far too recently in the overall history of Canada. Additionally, Simon using her language to bring awareness to her culture and background is important, not just to the Indigenous community, but to the world.
Federal politics Governor General Indigenous Mary Simon

1
Canada vs. Brazil: How they choose their representatives
2
Nshwaasnangong Centre opens its doors for Indigenous children and families
3
Invoking the Emergencies Act?
4
No space for Indigenous voices in politics amid Truth and Reconciliation
5
How the Canadian healthcare system is prioritizing for the vaccine rollout

The Power of Social Media