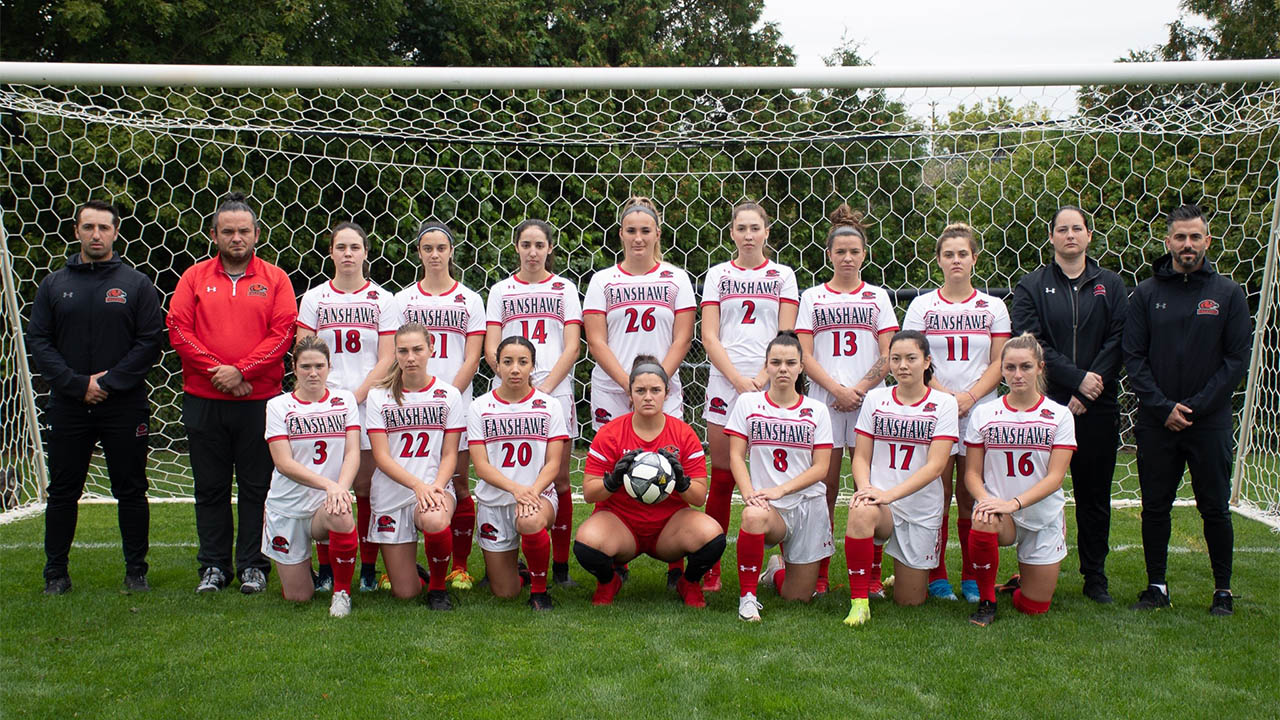 CREDIT: THE FALCONS FINISHED FOURTH NATIONALLY FOR THE SECOND CONSECUTIVE YEAR, BUT THE OBSTACLES THEY OVERCAME TO GET THERE WERE INCREDIBLE.
FANSHAWE ATHLETICS

For the second consecutive season, the Fanshawe women’s soccer team dominated the CCAA landscape, and finished fourth nationwide. The tournament was hosted by Humber College, who the Falcons had somewhat of a rivalry with this year. The first time these teams squared up was in the OCAA semi-final, when Fanshawe won a hard-fought rain-soaked match on home soil. Of course, Fanshawe would go on to win the OCAAs and earn the right to travel to Humber’s turf to play for national gold, where the two teams would meet up again.

The first game for the Falcons at the Ontario Soccer Centre in Vaughan was against the Capilano Blues. The Falcons came out sluggish, falling behind 2-0 in the opening 12 minutes. By the time the halftime whistle blew, it was 7-0. In the second half, Fanshawe’s lone bright spot was Kayla McQueen, who scored in the 59th minute, but it was too little, too late. McQueen, a leader on an otherwise young team, reminded her team there was still lots to play for.

“Having such a young, inexperienced squad this year was a challenge, but Breanne [Carreiro] and I did what we could to prepare them for the competition,” said McQueen. “Even after that first loss against Capilano, my team stayed motivated and were determined to fight to get that bronze medal.”

Fanshawe’s next match was a “get-right game” against the Holland Hurricanes, where goalkeeper Carreiro secured the 2-0 win with a clean sheet, along with Player of the Match honours, stopping all seven shots she faced. McQueen also added a goal in that game and cited how important that win was for the team.

“Getting that win on the second day against Holland was crucial for us,” said McQueen. “It gave our team the confidence we needed to realize that we made it this far because we are good enough to compete at that level. Losing to Capilano had a massive impact on us the night of our first game but for the girls to come out the next day and completely dominate showed how resilient we are.”

The win against Holland set up the rematch between the birds: the Falcons versus the Humber Hawks, this time in the CCAA bronze semi-final. Scoring was higher in that game, as Fanshawe started strong with a tally in the 28th minute from Aysia King, Fanshawe’s only Championship All-Star. Humber responded quickly, evening the score 10 minutes later, but it was the goal from Lauryn Soares, assisted by King, just before the half expired that had Fanshawe primed to take the win. It wasn’t until the 86th minute that Humber would make it 2-2 with a free kick marker, setting up penalty kicks to decide who proceeded to the bronze medal game.

Fanshawe looked dead in the water after the first three rounds of penalties, trailing 3-1 and on the brink of elimination. That’s where goalkeeper and leader Carreiro stepped up to keep her team alive. Not only did she keep the next two Humber attempts out of the net, she even scored on her own attempt in an effort that brought the Falcons even with the Hawks after five rounds. Entering sudden death, both teams found the back of the net on their sixth attempts, but it was Carreiro once again making a monumental save to give King the chance to send the Falcons to the next round. King made no mistake, and the thrilling battle of the birds concluded with Fanshawe taking both matches.

In the final match of the season for the Falcons, against the Southern Alberta Institute of Technology (SAIT) Trojans, it looked like they would potentially run away with the bronze after Jylia Boyd scored less than two minutes into the affair. However, the rest of the game was all Trojans. They levelled the score at half before taking control in the second, leading the Falcons 3-1. The Trojans fought off the surging Falcons before the final whistle to take bronze, leaving Fanshawe just shy of the medals for the second year running.

An interesting takeaway from the tournament was that after losing 7-1 to the Blues in game one, the Blues were nowhere to be found in the final four, meaning Fanshawe finished ahead of them nationally, despite the blowout loss. McQueen said her team was a little bit shocked, but ultimately realized it was because of how they chose to react to the loss that brought them so far. At the end of the tournament, McQueen was named an All-Canadian, an honour only given to 12 women Canada-wide.

“I am honoured to represent Fanshawe on the All-Canadian team,” said McQueen “The Fanshawe athletic program has supported me and this team tremendously throughout my years here. Being able to represent this school as an All-Canadian is a privilege and I am beyond grateful for the girls who played beside me, my coaches who never gave up on me and all the staff that was involved this year to help me make that happen. I love being a Falcon and I am excited to see these young girls continue their college career and experience the love and support from this program that I did.”
CCAA Fanshawe Falcons OCAA Soccer