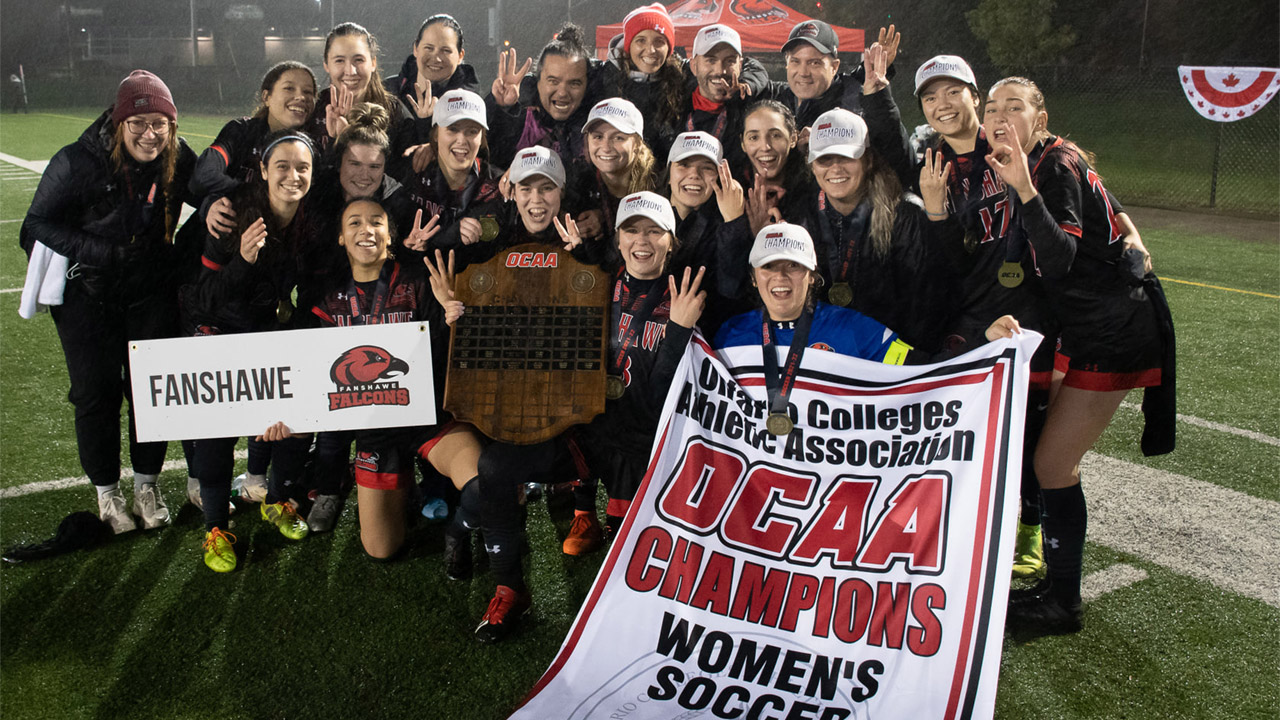 Marcaccio pretty much aced his entire 2021, winning the Fanshawe Invitational with a blistering time, a minute ahead of the rest of the field to lead Fanshawe to the win on home soil. At the following Centennial Invitational, Marcaccio set the pace again, finishing ahead of all St. Clair athletes who were flying that day, taking the win from Fanshawe to set up a head-to-head battle at provincials. The OCAAs were set in Toronto at Humber College, where Marcaccio once again finished first, leading the Falcons to provincial gold over St. Clair by a mere four points. Eight of the top 10 runners were from Fanshawe and St. Clair. At Nationals, Marcaccio had his only misstep (if you can really call it that, because it’s arguable that a third place finish across all Canadian cross-country athletes is the most impressive feat of Marcaccio’s season). Fanshawe won the team gold again with Marcaccio taking home the only individual medal of the Falcon runners. Marcaccio’s season was sparkling from start to finish.

What could be said about an absolutely dominant season from Fanshawe’s top pitcher? Lowry broke many records this season, most impressively striking out 19 Conestoga Condors en route to a complete game victory. The previous school record was 12 and the OCAA record was 17. She became the first Falcon to win the OCAA Softball Pitcher of the Year. Lowry now holds the school record for season strikeouts and career strikeouts and over the course of the season, finished 7-2, with a 2.26 earned run average, 119 strikeouts over 68 innings pitched and eight complete games. Lowry was also awarded OCAA athlete of the week in the last week of Sept., 2021 as well as the SupplementSource athlete of the month for September. Lowry was nothing short of incredible this season for the Falcons.

When you’re honoured as the best cross-country coach in Canada, it makes the school-wide Coach of the Year selection a no-brainer. Fanshawe is privileged to have all sorts of amazing coaches, but Vandervecht stood out this season. Not only did her men’s squad win national gold, the women also won provincial gold and finished fifth in the nation. One of Vandervecht’s runners, Brooke Jez, credits Vandervecht for getting her to try out for the team after years of dealing with a fractured tibia.

“Seeing what I’ve accomplished now, I would have never ran [without her],” said Jez. “She’s an amazing coach.”

There were many first year Fanshawe student-athletes to choose from for this award with incredible rookie performances across all sports but ultimately, it had to be Hampson. Hampson took home the first individual national medal from a Fanshawe golfer. In a sport where your good days are the best, and your bad days are the worst, Hampson stringed together an incredible performance three days in a row. On what would’ve been the championship round, the fourth day was cancelled due to unplayable course conditions. Unfortunately for Hampson, he was off to a sensational start to the day, shooting four under par to take the lead of the tournament but it was all-for-not. It’s a story of what could have been for Hampson, but that’s why we’re here to recognize him as Fanshawe’s top first-year athlete.

Team of the Year - Women’s Soccer

Cross-country was hard to top at Fanshawe this year, with both the men and women winning gold at provincials and the men even finishing in first nationally. However, even though it was a team effort, we felt that cross-country is more of an individual’s sport compared to soccer, and the women deserved some serious recognition for their accomplishments this year. This team has two “Fall-Stars” (listed below), but this unit had an endless amount of talent and worked together brilliantly, extending their OCAA unbeaten streak to 36 games. Madelyn Michienzie was OCAA West Division Rookie of the Year; Emily Sheculski was West Division Defensive Player and scored the lone goal in a hard fought match with Humber to send Fanshawe to the OCAA finals; Victoria Hinchliffe was an OCAA tournament all-star; Juliana Popovich and Abby Scott were named West Division All-Stars alongside Hinchliffe; Aysia King was honoured with an OCAA Player of the Week and Fanshawe Alumni Association Female Student-Athlete of the Month due to her performance at CCAAs, where she was a national tournament allstar and Player of the Match for her heroics against Humber in the bronze semi-final. So many players contributed to this team and that’s why they were as successful as they were. Props to Head Coach Mike Marcoccia as well for leading this incredible group of women.

Last but certainly not least, we have nine athletes who fell short of awards, but had amazing years and were very deserving. This list truly could have been much longer, but after heavy consideration, it was narrowed down to nine: