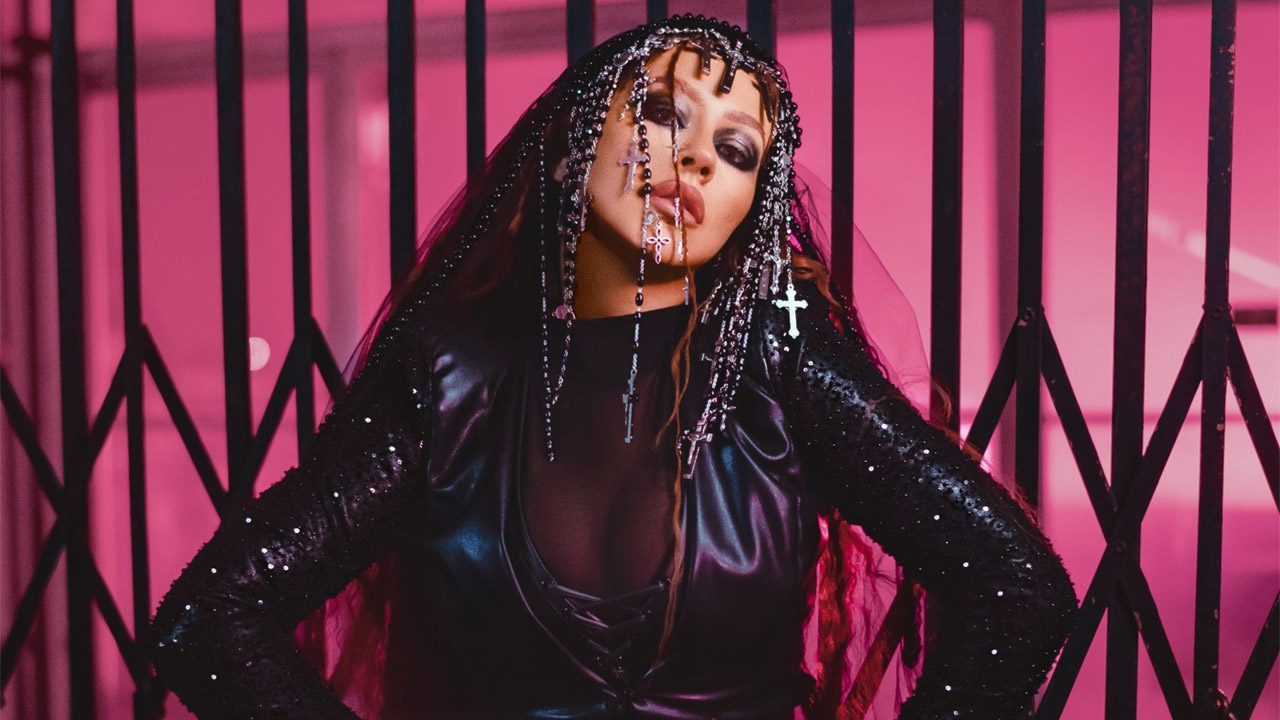 “I am a designer of Colombian background, and I had been talking to her stylist about the possibility of creating a look for her. I wanted to take part in this new musical era she was starting, as this is her comeback into Latin music after 20 years. After a little back and forth, the opportunity finally came at the last minute, one day in November.”

Guarin explained the quick turnaround of the project.

“I only had 24 hours to complete the look and get it to Vegas overnight for a Friday morning delivery,” he said. “I was able to design and create a leather look consisting of a jacket with a corset hook closure at the front, with hand beaded and sequined sleeves with a raised shoulder, and hand beaded, rosaries dangling at the sleeve cuffs. The look was inspired by a high-fashion window as it was for her new music video for ‘Santo.’”

In addition to Aguilera, Guarin has dressed and produced looks for many other famous figures like Kehlani, Kali Uchis, Jessie Reyez, JoJo, Trace Lysette and more. His designs have also surfaced in top publications like Vogue Italia, Women’s Wear Daily, InStyle and more.

Guarin’s adoration for pop culture was a key driver in his success and involvements.

“Honestly, my biggest influence has been pop culture, and my favourite pop stars, so dressing one of my ultimate icons like Xtina was absolutely wild! My mother has also always been into fashion, and I believe that she has also shaped me into becoming aware of beautiful clothing and style.”

The Toronto-based designer created his own line while studying fashion design at Fanshawe.

“I would host my own fashion shows every summer while off school and immediately continued to work on my own line following my graduation,” explained Guarin. “It’s been a slow and steady progress with ups and downs like every career. However, the biggest challenge came with COVID-19, which forced me to shut down all upcoming plans and delivered a lot of cancelled fashion related projects and exciting things that were incoming. But, I quickly pivoted and moved some plans far ahead of when I thought I would do it, and I launched my home-goods category,” said Guarin.

“Two years later, I am just starting to get back out there again with fashion projects and working towards rebuilding and coming back strong. My advice to anyone starting a line is, you need to network, work very hard, and think outside the box to stand-out!”

“I wish to keep expanding Atelier Guarin into a full lifestyle brand, honestly there’s so many goals and dreams, I could go on forever!”
Fanshawe alumni Fashion