Don't be Latin, mixed-race, or Middle Eastern: Exploring the lack of diversity in Canadian newsrooms 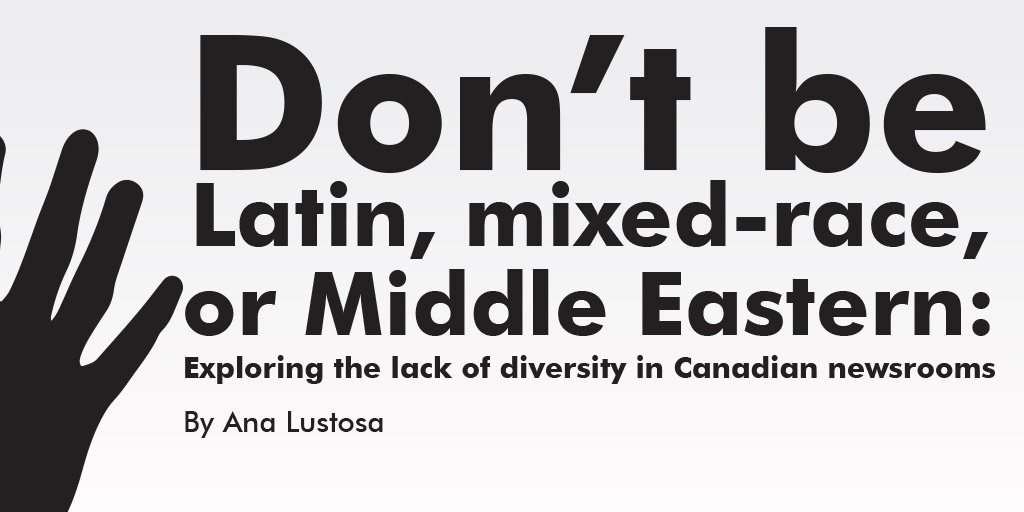 Known as a multicultural society, one in four workers in Canada are immigrants, according to the 2020 Annual Report to Parliament on Immigration. It is not hard to find people from different nationalities and races in our neighbourhood. However, this diversity is often not reflected in newsrooms across the country.

The Canadian Association of Journalists (CAJ) recently launched the first Newsroom Diversity Survey. More than 3,000 journalists working in 209 newsrooms joined and assembled data on everyone from interns to executives. One of the results showed that about nine in 10 organizations have no Latin (Caribbean, Central American, South American), Middle Eastern (Jordanian, Saudi Arabian, Iranian, Afghani), or mixed-race journalists. On the other hand, just three per cent of newsrooms have no white professionals on the team.

According to the document, women mostly work in newsrooms part-time (61 per cent) and in internship roles (64.9 per cent). In full-time positions, they dominate with 50.7 per cent compared to 48.9 per cent men and less than one per cent non-binary.

“It’s important to have diversity in the newsroom,” said CAJ president, Brent Jolly. “Because ultimately, you know, it reflects sort of the culture of the news organization and a lot of ways, both in terms of, the story ideas that are generated, the approaches that they take to stories, the sources that they include, and also bringing different viewpoints and lived experiences to the table.”

Many of these professionals leave colleges in Canada with the desire and excitement to work as soon as possible. Nevertheless, the reality can be a struggle. A graduate of the Broadcast-Journalism program at Fanshawe College, Brazilian Tatiane Gonino said it was a challenge to work in a newsroom as an immigrant. Despite having previous experience in Brazil, her accent and fear of working in a different language and culture sometimes paralyzed her.

“During the period that I was in Fanshawe, I talked with some journalists, and I saw a few foreign professionals working in newsrooms, just because it is a challenge to face another language that it is not yours and sometimes a discomfort is caused by you thinking that you are not good enough,” Gonino said.

Still, she never gave up. One year after her graduation and the birth of her son, Gonino applied for more than 100 job openings. The result? She received only one return. Nowadays she works in another area.

Coordinator of Journalism and Television News at Fanshawe College, Jim van Horne said the students, and recent graduates have a lot to offer newsrooms.

“International students often bring an appreciation for what it is to work in a relatively free media landscape. That verifiable fact can be broadcast and printed without worrying about censorship is a privilege. Also, local stories about world events can get a new perspective,” said van Horne.

Gathering data about race and gender in Canadian newsrooms has been a challenge. In 1994, the Canadian Daily Newspaper Association tried to collect it. Out of 82 newsrooms, half of them did not respond. Canadaland sent another survey in 2016 to 18 of the largest newspapers, and that time, only three answered.

Currently, the CAJ survey is considered “the most comprehensive data available to date on the gender and racial breakdown of Canada’s newsrooms and [marks] the beginning of what will be an annual, industry-wide survey,” according to the final report.

“I think that this kind of report can serve also as a focus point to help us bring some of these conversations from beyond the shadows, and ultimately hold a mirror up to ourselves on how we can do better and what better actually looks like in the long run,” Jolly finalized.
Diversity Journalism Multiculturalism

1
A note from the Fanshawe College Director of Equity, Diversity and Inclusion
2
Cheyenne Dockstader - Taking the opportunity to challenge myself
3
U Sports pushes for equity, diversity and inclusion in athletics
4
Formula One's diversity dilemma
5
Indie developers are leading the way for better representation in gaming

The loss of language and culture in Indigenous communities