Hunger strike over as city and advocates reach agreement 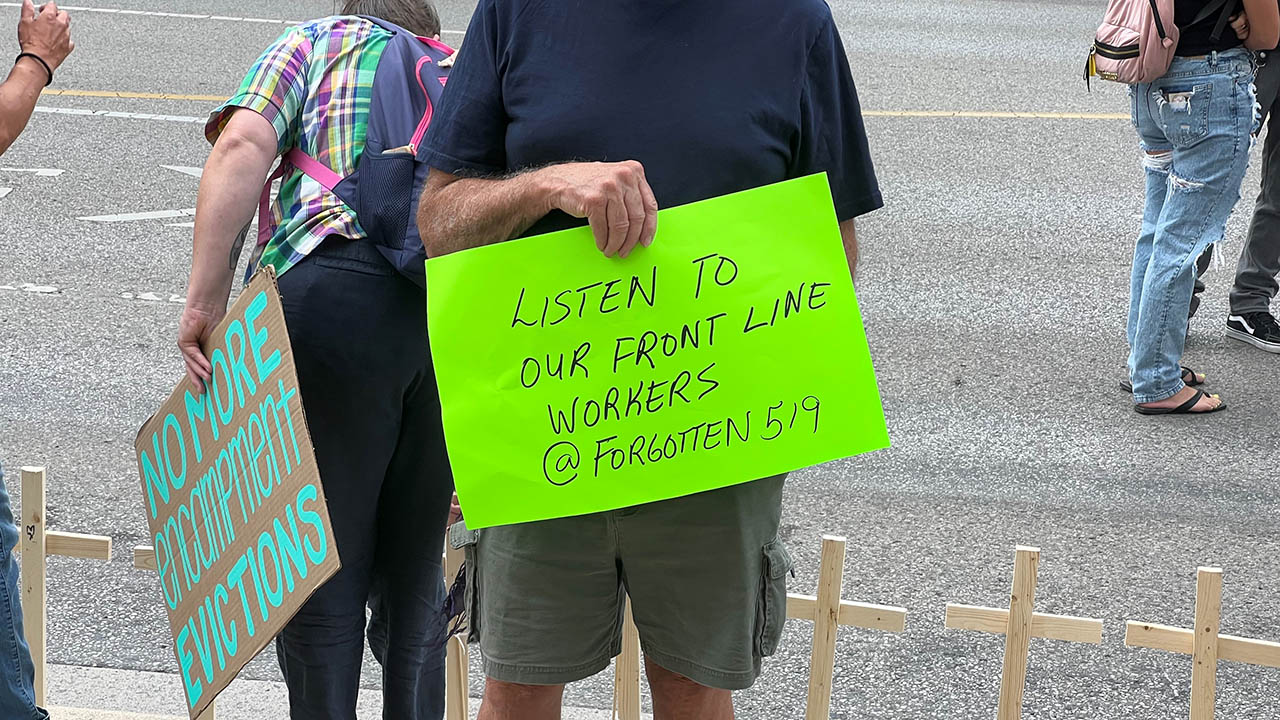 The area outside City Hall that just last week looked like a makeshift graveyard surrounding Dan Oudshoorn’s tent is now barren. Last week The Forgotten 519 and allies made up of frontline workers and agencies supporting those experiencing homelessness, drug addiction, and episodic mental health challenges in London sounded the alarm for acute action to be taken by the City of London to find immediate solutions to better support people living in encampments, campsites, tents or squats.

Starting Aug. 4, The Forgotten 519 spent two days in negotiations with the City and other frontline organizations, while Oudshoorn positioned himself in a tent outside City Hall, allowing himself to consume only water, electrolytes and prescribed medications until an agreement between the City and coalition was reached.

“I take my commitment to care for others very seriously. If I say I’m going to care for you, I have a responsibility to fulfill that commitment,” Oudshoorn commented.

The main goal of the hunger strike was to prevent even one more “unnecessary death” amongst London’s vulnerable population.

The meetings brought 147 people together in collaboration to focus on a collective solution. On Aug. 6, an agreement between the two sides was reached which saw the hunger strike come to an end. The group then whittled down to 30 people whom strategized an action plan, and a timeline to roll it out in.

The Forgotten 519 said it was overwhelmed by the response from the community and the quick action by the City.

“The Forgotten 519 are overwhelmed and grateful to their community that made these urgent actions possible,” read a statement. “We stand in solidarity with all of the frontline workers and in solidarity with the solutions we have collectively achieved today. We have seen the power of the collective voice of the frontlines and how this can achieve change.”

In a statement, the City said the conversations were difficult but the collaboration and input by frontline workers was essential in forming a united front in tackling such an increasingly widespread problem.

“We are grateful for the willingness of agencies from across the system to come together,” Kevin Dickins, Deputy City Manager, Social and Health Development said. “The perspectives of frontline workers, who are seeing and experiencing first-hand the impacts of a system that is stretched and broken, are essential in this process. Through the sessions…we have identified steps we can take – at the City and across the system – to better support people who are experiencing homelessness, addictions and episodic mental health challenges.”

Some key issues in the plan include a shift in the response to encampments focusing on outreach and support first, increased involvement of frontline workers in encampments, additional resources like water supplies for both consumption and hygiene purposes, target training for police, and an agreement regarding when and how an encampment is removed.
Activism Homelessness London City Hall London News The Forgotten 519