Trauma in the newsrooms: is there enough support? 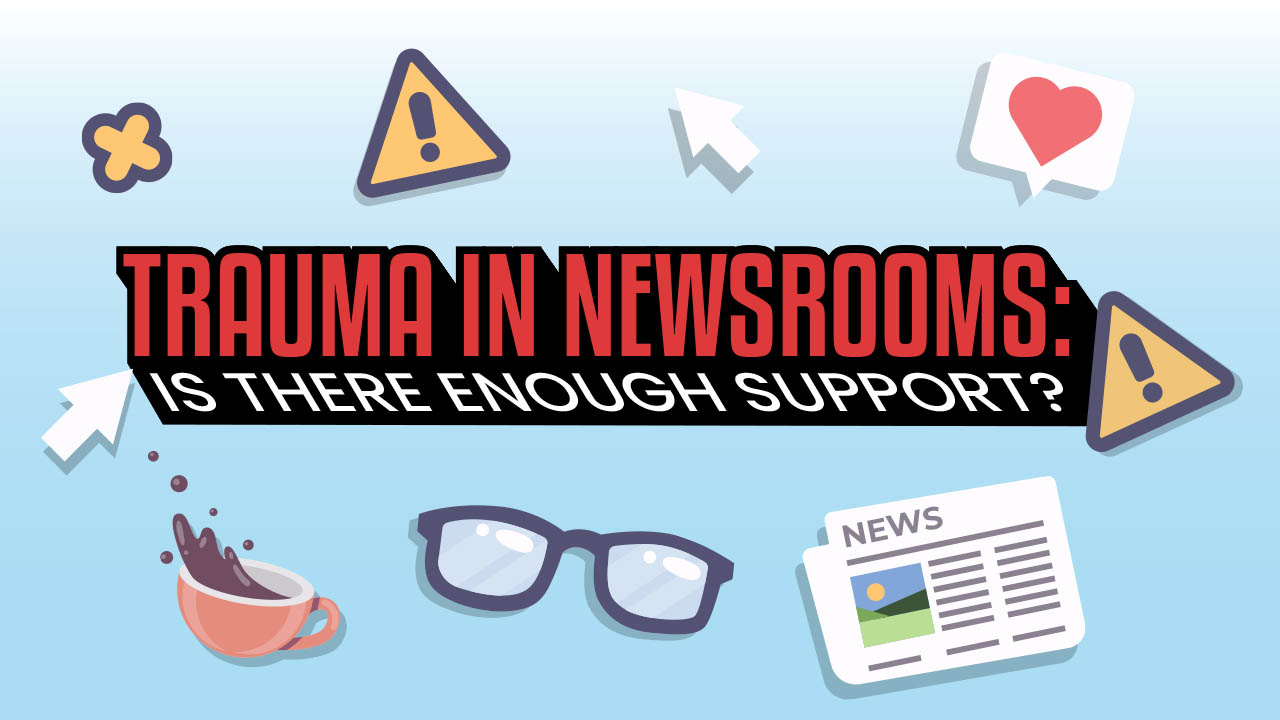 As a journalist, a conversation that has been coming up a lot more recently within the newsrooms I work in is mental health. Being in such a demanding field, where you are constantly seeing or hearing about heavy topics, it can be hard to separate yourself from it. But, in the past, this hasn’t been a topic of conversation for journalists and it’s one that has to happen.

Trauma and post-traumatic stress disorder (PTSD) can come from anywhere. But, it isn’t seen that way. The number one example people often think of is a soldier coming home from war. They obviously have seen some very scary, traumatizing things. But, according to Shirley Porter, a registered psychotherapist, counsellor, and coordinator of counselling services at Fanshawe College, other things can trigger that from a secondary perspective. This is something Porter explored in an article she wrote on the topic.

“I guess I hadn’t realized how many occupations were exposed to secondary trauma before I was writing it,” Porter said. “There are a lot of people who could be exposed to trauma and not realize it and then not recognize the symptoms.”

Porter has done a class in the past for the paramedic program at Fanshawe. This class turned into a whole mandatory course on critical incident stress, since these students will see very serious and potentially traumatizing things every single day on the job.

“One of the things that I would give the students was a list of potential symptoms to watch for, and that their loved ones could watch for in them. Usually, when it happens to us, we don’t realize it. It’s the people around us who recognize it first.”

Porter said when speaking about journalism specifically, this kind of thing would be beneficial in newsrooms.

In 2021, the tragic hate-motivated crime against the Afzaal family happened in London. I was on morning newscasts that morning. I woke up after going to bed before it even happened, to a text on my phone from my mother. She asked if I had heard about the family that was hit by a car. From there, it all continued to grow. Each hour there was new information found in the investigation. By the time I was done my shift, around noon, we had found out the police were suspecting it was a hate crime. At first, it just seemed like another day on the job. Something that I just had to deal with. But it wasn’t.

As the days went on where all of us on the summer team at Fanshawe’s 106.9 The X were reporting on new information, the heavier it got. For all of us. It was so close to home and happened quite literally up the road from where all of us worked, and for some, lived. The fact that this happened so close was… unimaginable.

Even though it was so hard, our professors, Jim van Horne and Gina Lorentz were right there next to us, guiding us through this uncharted territory. At this point, we only had one year of journalism training under our belts. We were working with our professors, who said this was the hardest thing they had ever had to deal with in their lifetime as journalists. It might be a long-winded story, but they provided us with everything we needed to get through that terrible time. We had a safe space to talk about our feelings and what we were going through. If at any time we needed them, they were always ready and there for us, just a Zoom call away.

After everything we went through that summer, I can’t imagine what it would have been like for the journalists who didn’t have that. Especially those who are Muslim and then felt at risk of being the victim of a hate crime. There needs to be more conversations about this and I’m happy there is progress starting to be made.

“PTSD that goes untreated can last for years, decades, a lifetime, and it’s very painful,” Porter said. “Not only to the person who experiences it but to loved ones because they see a person hurting and having struggles functioning in different areas of their lives. It doesn’t go away on its own. There are therapies that have been shown to be effective in releasing trauma and allowing a person to not be triggered on a regular basis.”

Porter said some people can relive that traumatic experience 100 times in a day, whether it be flashbacks, hearing sounds, or feeling a physical sensation. It would be hard for any person to function under that sort of stress and restraint. But, it’s not anybody’s fault if that happens.

“I think education is important, that people know what they’re looking for, what could happen. It’s not about character flaws or weaknesses. It’s just like if you trip, you could sprain your ankle. It’s a thing that happens in the brain and it’s nobody’s fault. It’s when the brain and the nervous systems are overwhelmed.”

Porter recommended for journalists and anybody else with a potentially traumatizing and heavy job for that matter, to get the help you need if this sort of thing happens. There are ways you can receive help and conversations you can have with your peers and colleagues to make sure everybody stays safe.

“You don’t have to suffer unnecessarily with this. There are things we can do to effectively treat it and the sooner you get help with it, the less suffering you have to go through.”

Remember, the more we talk about this in newsrooms, the better off everybody will be. It never hurts to check in with your colleagues every now and then.

If you or somebody you know are struggling, you can contact Fanshawe’s Counselling and Accessibility Services at 519- 452-4282 or at counselling@nullfanshawec.ca. Externally, the Canadian Mental Health Association Middlesex has a mental health crisis line at 519- 433-2023 or 1-866-933-2023.

1
Skylar McCarthy - What I learned through this COVID-filled year
2
It's not you, it’s your antidepressant: SSRIs and sex drive
3
A note to my younger self
4
Take some time to invest in yourself
5
Having a conversation: My group therapy experience