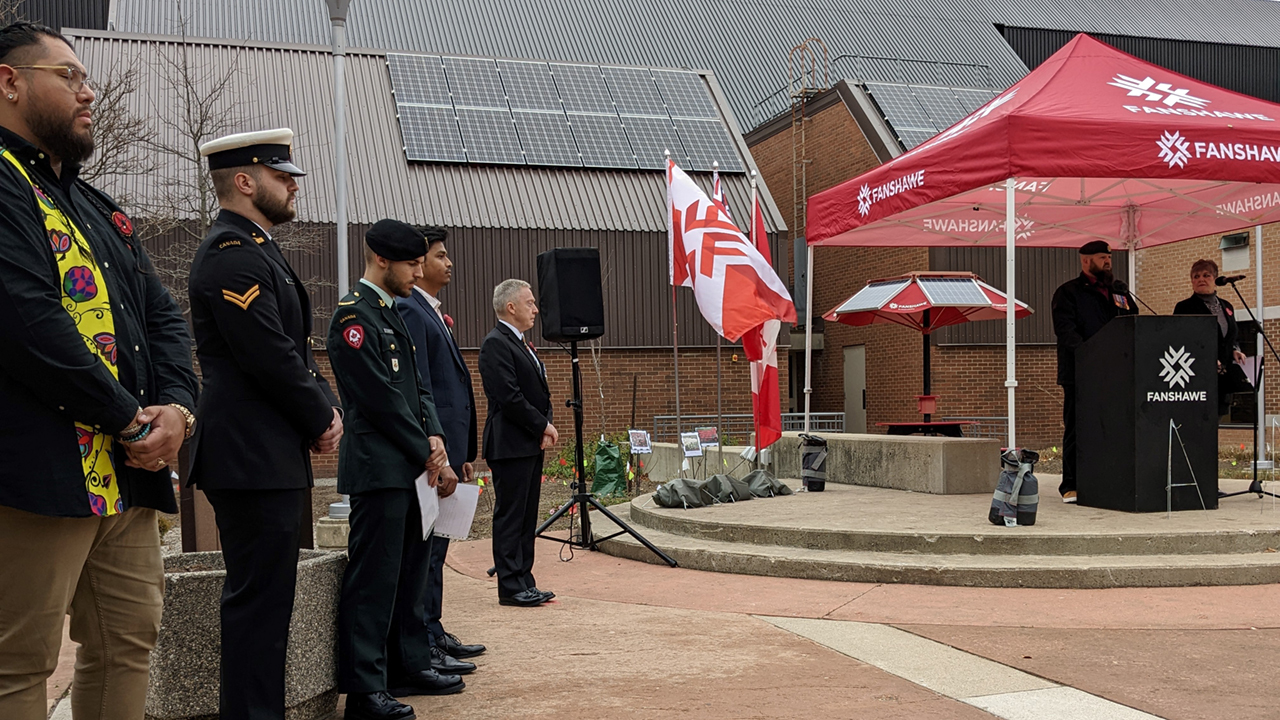 Marking the 104th year since the end of the first World War, Fanshawe held a Remembrance Day ceremony on Nov. 11 in the D courtyard for those who made the ultimate sacrifice.

The ceremony was led by the Director of Employment and Student Entrepreneurial Services and Lead Administrator of the Military Connected campus, Darlene O’Neill. After a short opening and land acknowledgement, Fanshawe President Peter Devlin thanked those in attendance.

“I’m pleased to see so many students here this morning. Your presence is so important as we reflect on the past with gratitude and look forward to the future with hope,” Devlin said.

“Take a moment to honour the bravery and sacrifices of all members of our Armed Forces. We remember those who have fought and those who have died to protect our country and freedom.”

Fanshawe has always had a strong connection with the military service, including the Military Connected Campus, started two years ago. The campus provides serving members, veterans, and their family members with career opportunities, and additional support. The college was also involved with the restoration of the Holy Roller tank earlier this year.

Devlin also recognized the 24 horticultural technician students who planted 2000 tulip bulbs in the D Courtyard as a tribute to 7600 Canadian Soldiers who lost their lives during the liberation of the Netherlands in World War II.

“We plan to return to this courtyard in early May, when the tulips are in bloom, to celebrate Netherlands Liberation Day with the Dutch Canadian Society,” Devlin added.

Once Devlin finished his opening remarks, Mike Terry, a military-connected student in marketing and a veteran, was invited to read “In Flanders Fields.” Following this, O’Neill offered a Remembrance Day benediction, asking people to remember and pray for those who have lost their lives across the multiple conflicts since the first World War.

Ismail Aravai, President of the Fanshawe Student Union, read the “Act of Remembrance”, the “Last Post”, traditionally used to commemorate those who have died in armed conflict before a moment of silence, was played by bugler Ken Baldwin.

To mark the end of the silence, pipe Maj. Doug MacRae played “Lament,” a song played by Canadian Armed Forces to commemorate the fallen. Cameron Lacroix, a police foundation student, was called up to read the Commitment to Remember, normally recited by a young person or member of the armed forces.

Two wreaths were then laid in front of the podium, bearing the words “FNMI Veterans”, for First Nations, Metis, and Inuit veterans, and “Lest We Forget” respectively. Leanne Mayer, an employment consultant with Fanshawe, led the crowd in singing the national anthem.

After a final thank you to all involved in the ceremony, those in attendance, and those who have lost their lives during military service, Maj. MacRae started to play once more to mark the end of the ceremony.
Armed Forces Darlene O'Neill Mental Health First Aid (MHFA) Peter Devlin Remembrance Day