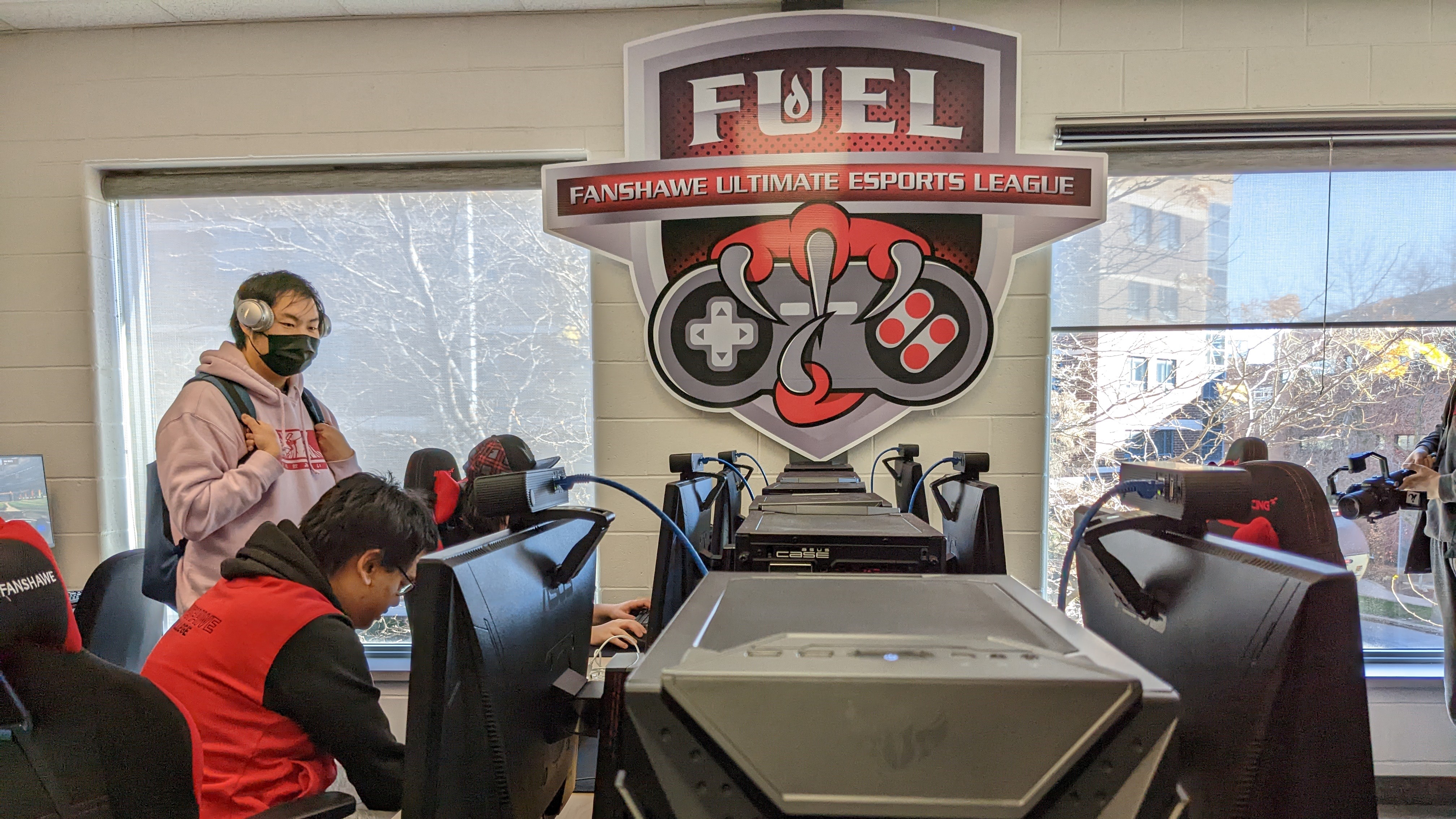 After four years of planning, the Fanshawe Student Union’s official Esports room has opened. The Fanshawe Ultimate Esports League (FUEL) has been going strong since 2016 when current Esports Coordinator Tyler Hetherington started it as a casual weekly tournament. In 2019, FUEL went varsity, becoming a part of collegiate leagues across North America.

The room, dubbed the “FUEL Station,” has 13 separate purpose built gaming computers, along with a few Nintendo Switches and Xbox Series X consoles. The stations are fully set up with mice and keyboards, though players are allowed to bring their own peripheral equipment if desired. Fanshawe branded computer chairs are also available, sitting in front of the computers designated for any match the varsity teams may have.

Hetherington explained that a lot of planning went into getting the FUEL Station opened, “It took some champions within the school itself to get something like this off the ground.”

“One of the great things about our esports program, is it just grew so big, that it was hard to deny it. We had a lot of meetings, a lot of pitches, a lot of discussions, but at a certain point, [the room] just became undeniable.”

The FUEL Station is located in J-Building right next to the Student Centre, in room J2018. It’s open from 10 a.m. to 10 p.m. every day, barring the times varsity teams play. All current Fanshawe students are allowed to use the room, as long as they have their student card. “We’ve got some basic rules, primarily around respecting the space, respecting each other, but also just specific rules for when you’re in here,” Christine Robinson, one of the broadcasters for FUEL, explains.

“When you’re done, make sure you sign out of any accounts, get your student card back, and you’re good to head out on your merry way.”

Hetherington says he’s excited for the impact the room will have for gaming on campus.

“COVID’s been tough, they’ve been gaming at home by themselves and online. Now they get to connect in person and game with some hopefully lifelong friends.”

He adds that the physicality of in-person gaming makes the games much more enjoyable for both the viewers and the players.

“It’s very similar to basketball for example, where everybody on the bench is screaming and hollering out when a good play is made.”

Hetherington says the competitive varsity teams are a bonus to the community FUEL has built.

“We do fun, casual stream nights and fun game nights. We do our in-person tournaments every Monday night and that casual gaming is just as important as our competitive gaming. I think the room is really going to help the community come together.”

Adam Boyce, the Valorant Team Manager for FUEL, said that having a spot to hang out with people he’s known online for so long is a great feeling.

“Having that physicality, I can reach over to the guy next to me and just be like, give him a fist bump, see that guy’s reaction to a play, talk to him and all that, it’s a completely different world compared to online.”

Boyce explained further that a place to relax and meet new people on campus means a lot to many of the FUEL players.

The importance of having a space for the team to call home is a common theme amongst all involved in FUEL. Hetherington said it best himself when asked about his favourite part of the room; “The fist bumps.”

“I don’t want to say we built the room just for fist bumps, but they’re a big part,” he clarified. “The ability for the players to do things like fist bumps in person, you just can’t put a value on that.”
Esports FUEL Video games

1
FUEL secures four titles in Esports divisional championships
2
How video game music evolved through the decades
3
Video games to play while on break
4
Pandemic leisure: How students are filling their free time now vs. two years ago
5
Leisure Suit Larry: A raunchy relic of the non-PC gaming age

Affording life as a student is harder than ever