Art or arrest-worthy: Graffiti is making it's mark in London

Margaret Sheridan News September 24, 2007
The lines have been drawn, quite literally in fact.

Over the past weekend a group of volunteers hit the streets in London as part of the second annual Go-Graffiti-Go day in the hopes of wiping some of the more unsightly tags from walls and fences across the city.

“Graffiti is the application of any markings on any surface without permission, it's illegal,” said Donna Szpakowski, Go-Graffiti-Go program coordinator. “It's a community spirit project working with London, and London Police Services, and the community at large including residents and businesses. 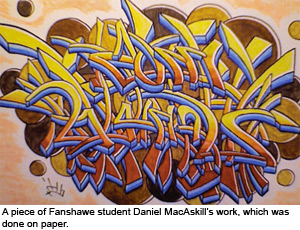 “We work together to raise awareness about graffiti and to remove it.”

But Daniel MacAskill believes that there is more than one kind of graffiti. MacAskill, who is a student at Fanshawe College, has experience as a graffiti artist, both paid and unpaid.

“There are certain levels. Most people are familiar with what a tag is, and that's just someone scribbling on a wall or scribbling on your mailbox and writing their name wherever they can,” MacAskill explained. “Then you've got other people who are called bombers, they'll purposely go over other peoples work, usually with much better work, The third level to it someone who's a graffiti artist and that's the people that you see doing huge murals and being paid to do their work.”

MacAskill, however, does agree that the majority of graffiti seen around the city tend to be unsightly tags, but that sometimes you'll run across a mural done by someone who is exceptionally talented, and that should be recognized as more than just your run-of-the-mill graffiti.

“If somebody spray painted on my house, I (would) think ‘that's garbage,'” said MacAskill. “But I think if people were seeing work that was popping up in their neighbourhood that was extraordinary with lots of colour they might have a different take on it. But obviously what they're going to hate is what they see. Obviously they're going to want it gone and obviously they're going to be upset about the fact that they have to remove them and I think they should remove them. That is littering society and we really don't need that around.”

A good example of that according to MacAskill is the graffiti that has been popping up across campus recently.

“There have been some issues,” said Marion Dietze, Manager of Facilities Support Services at Fanshawe. “They haven't been huge ones, our worst place is washrooms. Almost male dominated in that there are a lot more in the men's washrooms than the female. People tend to do a lot of (tagging) on the doors and mirrors.

“We certainly do discipline students and charge a fee, if we caught them we'd try to get some damages.”

“That's the whole aspect of pure stupidity,” MacAskill said. “Congratulations, you have a marker, you can write on a wall, and you're going to vandalize the washroom. But the people who are good at graffiti and know what they're doing won't do that.”

Graffiti can affect a community as a whole through anything from lowering property value in the area by approximately 10 per cent, affecting the bottom line for local businesses or causing an increase in taxes to cover the costs of cleanup. In fact, due to the amount of graffiti in the past few years in London, the city now requires that people purchasing permanent markers anywhere in London provide proof that they are above 18-years of age.

“Graffiti is illegal. A lot of people don't know that it's a crime, and it's a criminal offense. It can affect somebody's ability to get a job, and it can affect their future,” Szpakowski continued. “It's a community issue and it takes a community to combat it.”

MacAskill believes that though the Go-Graffiti-Go initiative is a good one, and well warranted, that there should be some balance allowing the better artists to demonstrate their skills.

“You walk down a street every single day and you don't see anything,” MacAskill explained. “Then the next morning, boom, there's a huge piece on the wall. It's kind of a surprise.”

London-Fanshawe candidates square off in Forwell