London-Fanshawe candidates square off in Forwell

Margaret Sheridan News September 24, 2007
With only a few short weeks before the election, Fanshawe College hosted an all-candidates forum for the London-Fanshawe riding.

The forum, which took place in Forwell Hall on Wednesday, September 19 shortly after noon, was attended mainly by the lunch time crowd who, after a while, became engaged when it came to asking the representatives questions. 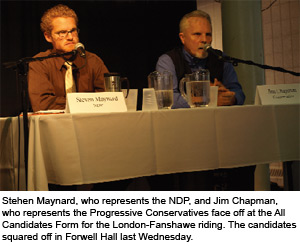 The hot button topics seemed, unsurprisingly, to be the tuition freeze, or lack thereof at the moment, as well as college funding and the environment.

“Students care about our environment, care about health care and how the two are linked,“ said Maynard. “[They] care about affordable housing, making sure people have access to it, safe affordable and reliable housing.”

Much of the debate was spent talking about the promises that were broken in the last term by the Liberal Dalton McGuinty government, a topic which put Ramil in the hot seat at times. Criticism, by both the candidates and the students abounded on the lack of a current tuition freeze and the increase in tuition costs within the past couple years since the two-year trial freeze was lifted.

But all candidates were able to agree that colleges need to get the provincial funding they deserve, as opposed to playing second string to the universities when it comes to getting government money.

“Many students who go to university and graduate realize they don't have the skills to start a career and end up going back to college,” said Khalil. “It should be equal footing funding depending on proposals and not just because one's a university and the other a college.”

The election will be taking place on Octobet 10 and voters can cast their ballot at John Paul II High School on the corner of Oxford and Highbury Streets. For the students in either of the residences advanced polling is slated to begin on September 25 and run through October 5 on campus.

“The votes you cast today create the world you inherit tomorrow,” explained O'Neill.

“It's an important responsibility that we all have to participate in the process,” explained Maynard. “Get out there and vote, make your voice heard, because if you don't someone else will be making all the decisions for you.”

Art or arrest-worthy: Graffiti is making it's mark in London