Allison Selway Culture September 24, 2007
OkayCity will be hitting the stage during New Music Night at The Out Back Shack on Friday, September 28.

Once again, the collaborative artists who make up OkayCity will be bringing your favourites from their solo discs, as well as brand new material from their album set to release in January of 2008. Over the past two years, these two artists have made their transition to London a booming success bringing with them a vibe that has spread across the city. 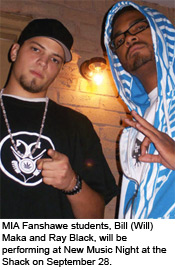 With their debut singles taking over the Fanshawe Radio station, 106.9 “The X FM,” Ray Black's Days Go By from his first album Cruise Control and Bill (Will) Maka's hit “Never Stop Speakin' It” off his record Whatever Happens, Happens both deliver a new spin on hip-hop.

Performing at London venues including Fanshawe's Out Back Shack, Norma Jeans, Salt Lounge and The Embassy, Maka and Black have put their own personalized spin on this genre of music. With musical influences ranging from J Dilla, A Tribe Called Quest and Shad to Swollen Members and Underground West Coast, they continue to “let the music speak for itself” as they move out of the Forest City and into the music world.

“Everyone's a ‘rapper' today, not enough people are making good hip-hop music. It seems everyone's hooked on this material trendy stuff they hear on the radio, so [I figured] I might as well do something different that's still catchy and people can vibe to,” said Black.

Originally from Oakville, Black started writing in ninth grade, as he began to put his love for music down on paper. Since then, this self-proclaimed lyrical artist believes in creating music with significance and meaning.

“I like to make people think about what I'm saying and actually have substance in my songs. If listeners don't hear what I'm trying to say or they don't get the message then I'm not doing my job,” said Black.

Kitchener born Bill ‘Will' Maka, also known as Mad Mak, was influenced by a heavy hip-hop culture and over the past five years has taken on his own promotion, as well as those “who worthy of representing the true hip-hop essence,” he explained.

New Music Night and Open Mic Night during the 2006 school year offered both artists a chance to show off their talent and they soon recognized their mutual love, energy and gift for music.

“We usually rocked all the hip-hop shows at the end of the school year, but always had different sets. Once we both found out we got into The Music Industry Arts Program [at Fanshawe] we decided that when we hit the stage, we might as well go up together and feed off each other,” Maka said.

“We clicked on stage, started writing songs together, and the rest is history,” added Black.

Future plans for ‘OkayCity' (originating this past year, incorporating their hometowns with their current residence here in the Forest City) are in the making. With their highly anticipated album in the works, much time will be spent in the studio over the next few months but they hope to set out on a Ontario tour and out to the West Coast in the New Year in order to promote their new album.

“This is our passion and we love to bring energy to the music and our performances. Wherever the music takes us...let it speak for itself. We have fun making hip-hop and performing is a blast, so hopefully the right person sees that,” said Black.

Maka and Black, will make their first appearance and kick-off the new 2007 school year with their first show on Friday, September 28 here at Fanshawe. Doors open at The Out Back Shack at 9 p.m. for this all ages event with headliner Shad set to perform with hits from his newest album being released in a few weeks.

“It's our first show back in London since the school year started so get there early. We'll have some new material so come out and jump around with us,” said Black.

For more info on Black, Maka a.k.a. ‘Mad Mak' or OkayCity, you can visit their individual Myspace pages at www.myspace.com/rayblackhiphop and www.myspace.com/madmakmusic.

LOLA Fest offers unique culture and music to the city