Although Canadian hip-hop might not project the ferocious veracity of New York, Los Angeles or Atlanta street life, its growth over the past decade has been immense and artists today have begun to develop their own identities in both Canada and the world. London's own DJ Chedo has made it his personal goal to find these artists and bring their music to the airwaves. 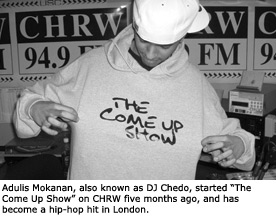 A dedicated hip-hop connoisseur, Adulis Mokanan, also known as DJ Chedo, began his love affair with urban music when he moved to Canada from Saudi Arabia in 1996. Influenced by his cousins, who were already settled in London, Ontario, he began listening to artists like LL Cool J, 2Pac and Notorious B.I.G. (although he does remember hearing songs from said artists in his former country). While many fans may have taken up rapping in the footsteps of his or her idols, Chedo instead chose to pursue radio DJ-ing, no less an art than the former.

He took a volunteer position at CHRW, Western's radio station, and quickly discovered the excitement of doing a live show, even if that meant taking the graveyard shift. Now, five months into his volunteering, Chedo's broadcast, “The Come Up Show” has been bumped up to a prime-time slot: Mondays from 1:30-3:30 PM. This has meant, among other things, that he has experienced a sudden growth in popularity, which has led to several thousand downloads of previous shows and a Facebook group with over 900 members from North America, Europe and beyond.

“The music that I play is something different than what's on commercial radio and that's what people are hungry for,” Mokanan said.

Certainly his tastes do differ from the average club-going hip-hop fan, as this DJ places more value on an artist's lyrical content than just the beat of the song itself. Particularly those who delve into personal growth seem to have had a lot of impact on Mokanan.

“I believe in knowledge,” Mokanan said. “I always try to learn something every day.”

Many of the artists he plays also happen to be Canadian, and while that is in part due to CRTC regulations, he takes pride in showcasing talent from not only London, but the whole country. Kardinal Offishall, Classified, Maestro and Choclair remain among his top choices for emcees from Canada.

As another part of his endeavours into Hip-Hop and R&B, Mokanan has also put together a mix-tape collection of songs called “Just Getting Started Vol. 2(Hip-Hop and R&B Edition).” It is currently available at London outlets such as Str8 Goodz, The Closet, NYC Stylez and Hip-Hop Don't Stop.

Chedo's passion for urban music is evident within a minute of conversing with him, and his charismatic personality, accompanied with his ambitions for radio certainly suggest that there's a lot more in store for his growing career. When asked about what the future holds in terms of radio broadcasting as a dying profession, he responded, “People go to Satellite radio [because] in their city there's a lack of good content on those radio stations. But if you have good programming... a good personality and bring out local talent, other radio stations will not compare to you.”

If what he says rings true, DJ Chedo is a name we'll be hearing much more of in the future.