Bits and Bytes: Ninja Gaiden and Castlevania will have you hooked


This week's column is going to focus on a couple of games that I purchased for the Wii for its virtual console. These games are classics and close to my heart. If you don't have these two, hang your head in shame. Here's why you should have them: 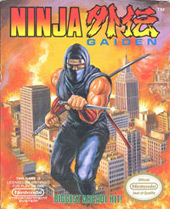 Ninja Gaiden
This old school side-scroller made me fall in love with the Nintendo Entertainment System (NES) even more when I was growing up. The game, in which you play as ninja Ryu Hayabusa, hooks you in with some of the coolest stage design, villains and music that the NES ever had.

When this game came out, the cut scenes that helped the story unfold had never been done before. The game used multi-layered scrolling to make it look like the game had a 3-D aspect to the cut scenes (and in some levels). Even today, these little touches still hold up well and I think that gamers that have never experienced this game will be blown away by an “old” game.

The thing that puts most people about this game is that it is hard Not just Xbox Ninja Gaiden hard, but REALLY HARD. The enemies re-spawn and re-spawn and re-spawn. If you kill one of them, head back in the opposite direction for even a couple of inches, and head back in the direction you're supposed to be going, that enemy will be back. There are some crazy jumps that no matter how many times you play this game, you'll STILL miss them some of the time. I'm not even going to get into the frustration of the final boss...

If you like your games on the difficult side, but find it rewarding when you conquer them, get this one. Even if you don't like hard games, most people should be able to get through the first four levels without that much trouble. Use your ninja power-ups (of which there are a couple), and you'll be fine. This is an instant purchase here, people.

Castlevania
You want hard? This is hard. It's hard and cheap, just like Ninja Gaiden but this game is a classic. You want superior level design (in the eight-bit days), good music and satisfaction when you finally beat a level? Then play this.

Simon Belmont takes his whip and sets forth on his first adventure to destroy Dracula. On the way, he'll find the Mummy, medusas heads (curse them!), bats, water creatures, falling blocks, whole turkeys and more.

What I said about Ninja Gaiden in turns of gameplay and challenge can be said about this classic and it's another game that gamers of today should be able to enjoy. With that being said (about both games), make sure that you have a pillow to punch and a soft spot to throw your Wii-mote at, because you'll need them both.